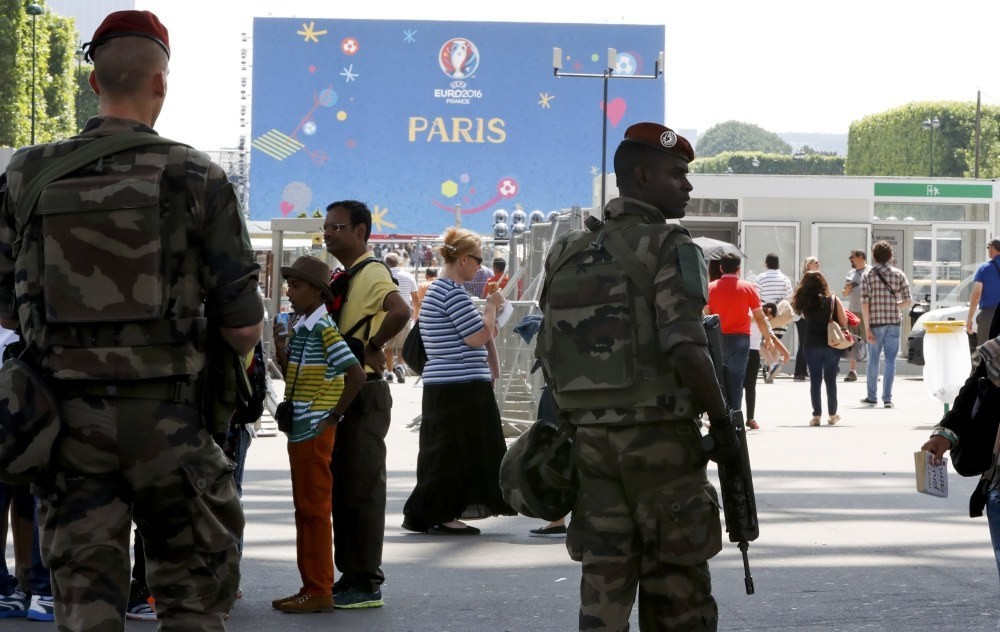 French military patrol at a fan zone near the Eiffel Tower before the start of the UEFA 2016 European Championship in Paris, France, June 7.
by Daily Sabah with Wires Jun 08, 2016 12:00 am

After a French extremist who was planning attacks during the Euro 2016 was arrested in Ukraine, a senior French counter terrorism official said they are still worried about possible extremist attacks despite strong security measures

Despite putting unprecedented security measures in place for Euro 2016, France remains deeply concerned over possible attacks by extremists. Millions of foreign visitors and the world's press are set to descend on the country for a month of sporting action from Friday - creating endless nightmares for its overstretched security services.

"From the point of view of preparation, we have done as much as possible. Everyone has been mobilized: police, paramilitaries, many soldiers," a senior counter-terrorism official told AFP, on condition of anonymity. But, he said, "to be totally honest, I'm worried."

President François Hollande acknowledged the threat on Sunday, though he tried to put a brave face on it. "This threat will last for a long time, unfortunately, so we must do everything to ensure that the Euro 2016 is a success," he told France Inter radio.

Hollande's government introduced a state of emergency in the wake of last year's extremist attacks in Paris, allowing police to raid homes and place people under house arrest with minimal oversight.

But the challenge of monitoring those who have returned from Syria and Iraq has overwhelmed the continent's security services. "What really worries us above all is the guys who are already here in Europe - guys that are already in Germany for example, that we haven't seen arrive, that the Germans haven't found, who have stayed quiet and waited," said the official. "We have re-established some borders, but we shouldn't dream - borders cannot be controlled." A recent incident thousands of kilometers away has further darkened the mood.

On May 13, in a town north of Baghdad, militants attacked a cafe where Real Madrid supporters regularly meet, killing 16 people with automatic weapons and grenades. "It's like a postcard sent to Euro 2016 -- a direct message," said the counter-terrorism official. "It was maybe to scare us, in which case it was successful."

And tensions were raised further on Monday, when Ukraine's security services said they had arrested a suspected far-right extremist Frenchman with an arsenal of weapons and explosives who was allegedly planning "15 terrorist strikes" before and during the tournament.

The 25-year-old man had a huge arsenal of weapons and was planning to attack a string of locations in his home country, Ukraine's security services said, just four days before the tournament kicks off in France.

"We know that DAESH is planning new attacks and France is clearly targeted," said the head of France's DGSI domestic intelligence agency, Patrick Calvar, during a recent parliamentary session.

The United States also warned its citizens of possible attacks in Europe, saying targets could include the UEFA Euro 2016 football championship in France. "Euro Cup stadiums, fan zones, and unaffiliated entertainment venues broadcasting the tournaments in France and across Europe represent potential targets for terrorists," it said in a statement.

France has mobilized a huge security detail of 90,000 police and security guards to protect the 10 venues hosting matches around the country.

Some of the 10,000 soldiers deployed around France since last year's deadly extremist attacks in Paris will also be used to secure the matches.

"Our objective is for the Euros to be a big festive gathering, but we owe the French the truth. One hundred percent precaution does not mean a zero percent risk," Interior Minister Bernard Cazeneuve said recently.

While fan zones and stadiums will be under heavy guard and surveillance, a bigger risk may exist in adjoining areas. The attacks on Nov. 13 in Paris that killed 130 people demonstrated that hitting random "soft targets" such as bars and restaurants was just as effective in generating fear.

"Nothing is simpler than organizing an attack. You protect 1,000 targets, so it's the 1,001st target that will be hit," said Pascal Boniface, head of the Institute for International and Strategic Relations in Paris. "Driving past in a car and firing on pedestrians is within the capabilities of many people," he added.

In the current climate, any minor attack or even attempted attack risks ending the football competition immediately. "If there are any deaths, it's simple - three-quarters of foreign teams will leave France," said the counter-terrorism official.

Preparations in France have also been marred by strikes that have paralyzed transport and torrential rain that caused flooding along the River Seine, forcing tourist attractions including the Louvre Museum to close.

Three months of student- and union-led protests have descended into violent clashes between demonstrators and police. Unions are tapping months of public anger over a labor bill that would make it easier for employers to fire workers and lengthen the working week. Many videos showing police and security forces apparently using disproportionate force on protesters have attracted viewers and controversy, including a police officer aggressively shoving a woman and throwing her to the ground.

The head of France's state railway said Tuesday he was hopeful a week-long strike would end before the Euro 2016 soccer tournament starts on Friday after a new deal was put to the CGT and other unions.
RELATED TOPICS