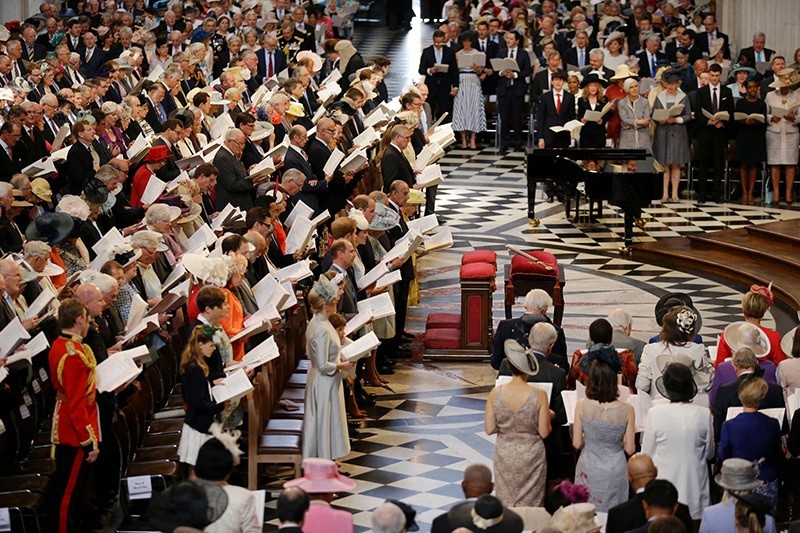 Members of the royal family on the front row (L) stand with the congregation to sing during a national service of thanksgiving for the 90th birthday of Britain's Queen Elizabeth II at St Paul's Cathedral in London on June 10, 2016. (AFP Photo)
by Jun 10, 2016 12:00 am

Britain began a weekend of celebrations for Queen Elizabeth II's official 90th birthday on Friday with a national service of tribute at London's St Paul's Cathedral.

David Ison, the Dean of St Paul's, urged the congregation of some 2,000 people to "give thanks for the length of years that has been granted to our most gracious Sovereign Lady, Queen Elizabeth."

Britain's longest-serving monarch, who celebrated her real birthday on April 21, attended the ceremony with her husband, Prince Philip, and other members of the royal family. The prince turned 95 on Friday.

"He has, quite simply, been my strength and stay all these years," the queen said in a brief statement on Prince Philip's birthday.

The royal family published a commemorative portrait of the couple, who married 68 years ago, by celebrity photographer Annie Leibovitz. Leibovitz also took three portraits of the queen to mark her actual birthday in April.

He praised Prince Philip and other royals for their "mutual love and support and for service to this country."

Broadcaster and wildlife presenter David Attenborough, who is also 90, read from a tribute by another 90-year-old, Paddington Bear author Michael Bond.

Prime Minister David Cameron read from the Bible, while opposition Labour leader Jeremy Corbyn, London mayor Sadiq Khan, and former prime ministers John Major and Tony Blair were among the other politicians who attended the service.

More events are planned during the weekend, including a street party for some 10,000 people on Sunday near Buckingham Palace, the queen's London residence.

Most guests at the Patron's Lunch, organized by one of the queen's grandsons, Peter Phillips, will come from some 600 charities and other groups under royal patronage, while many smaller events are planned across the country on Sunday.

"From my early childhood - ever since I was causing havoc in the corridors of Windsor, Balmoral and Sandringham with my sister and cousins - it was impossible to ignore the standard my grandmother set when it came to her support of her patronages," Phillips wrote in The Daily Telegraph.

"And what better way to bring the British public together than a good old-fashioned street party," he said. "It's what we do best."

An annual Trooping the Colour ceremony will mark her birthday in central London on Saturday, accompanied by an honors list.

Dating back to the 18th century, the event takes it name from a ceremony to hand over the Colour, a regimental flag, and parade it through ranks of troops.

The queen and other royals are expected to appear on a balcony at Buckingham Palace during the event, which will feature a fly-past by jets from the Red Arrows air force display team.

Born in 1926, the queen has ruled since 1952, when she was 25 years old. In September, she surpassed the six-decade reign of Queen Victoria, her great-great grandmother, who sat on the throne from 1837 to 1901.

Britain's system of constitutional monarchy keeps the queen as a largely ceremonial head of state, allowing the government to pass legislation and run the country.