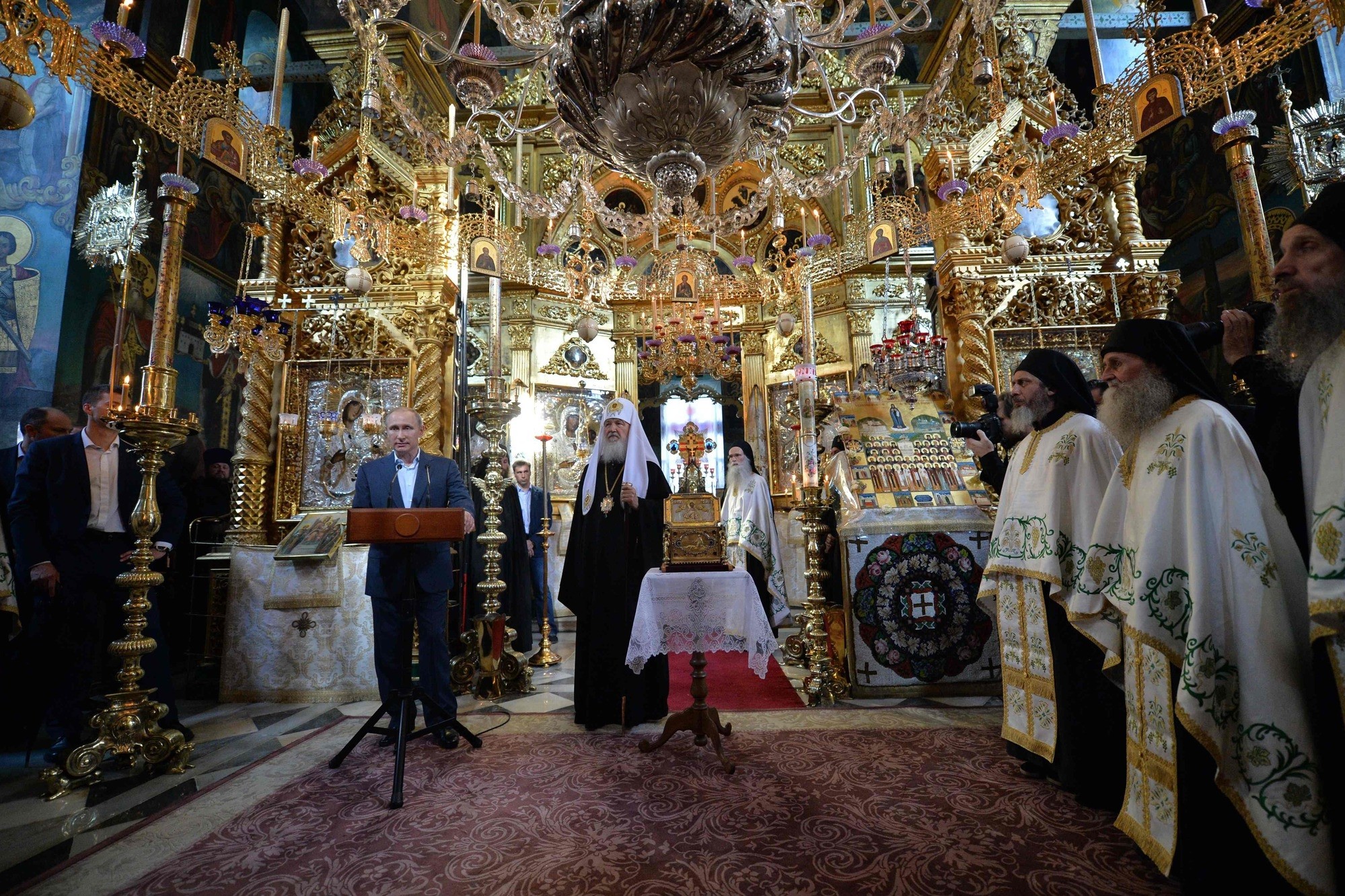 Russian President Vladimir Putin (L) and Patriarch Kirill of Moscow and All Russia (C) visit the Saint Panteleimon Monastery on Mount Athos, in Karyes on May 28, 2016. (AFP Photo)
by Daily Sabah with AP Jun 13, 2016 12:00 am

A long-standing divide in the Orthodox Christian world has arisen once again after the Russian Orthodox Church declared it would not attend a planned council this week, the first in 1,229 years, citing other churches not attending the event convened by Istanbul-based Fener Greek Patriarchate

The meeting, moved to Istanbul from the Greek island of Crete, was scheduled to start later this week and seeks to include all Orthodox churches across the globe. A meeting of Orthodox churches at this level has not been held since 787, the year of the seventh council recognized by Orthodox and Catholic Christians.

Hilarion, a bishop who heads the Moscow Patriarchate's department of external church relations, said in a televised statement that the Moscow Patriarchate would not take part if other churches are walking out, and suggested the meeting be postponed. "We have made a decision that we will not be able to take part in the all-Orthodox Synod if other churches do not go," Hilarion said.

Although Russia's decision to join others not attending the council or synod is largely tied to disagreement between more conservative churches and those seeking further reconciliation with the Vatican, it is still a blow to the plans of the Fener Greek Patriarchate. Patriarch Bartholomew I, who ranks as "the first among equals" in the Orthodox world, was seeking unity among the world's 300 million Orthodox Christians through the gathering of leaders from 14 independent Orthodox churches. The Russian Orthodox Church has an estimated 100 million congregants. Bulgaria's Orthodox Church put the plans in jeopardy last week saying it would not attend, citing differences over the agenda, and the Moscow Patriarchate proposed holding a preliminary meeting to discuss the controversial issues raised by the Bulgarian church, as well as others.

Reverend Alexander Karloutsos, a member of the organizing committee of the Great and Holy Council, told the Associated Press on Monday that they are inviting Moscow and other churches to meet and discuss the differences on June 17. "There is no mandate to change or postpone and we are going to proceed. They asked for a pre-conciliar meeting on the 17th and we expect them to be here," he said. "We are the church of love and embrace everyone."

Unlike the Roman Catholic Church, Orthodox churches are independent and have their own leadership. Hilarion said the Russian church will reach out to Bartholomew I to suggest postponing the meeting until the differences are resolved and all the churches agree to come. Russia will have to give the Crete gathering a miss if Bartholomew I does not agree to reschedule, the Russian church said in a statement at the end of an extraordinary meeting in Moscow.

"All churches should take part in the all-Orthodox Synod, and only in this case would the decisions of this assembly be legitimate," Hilarion said.

The Holy and Great Council has been 55 years in the preparation. Since the "great schism" there have been about a dozen smaller Orthodox councils over the centuries to discuss theological or doctrinal issues, but there has never been a meeting of this scale.

The council aimed to take up the mission and role of the Orthodox Church and its global flock, issues relating to the function of the churches and relations with other Christian faiths. Unity of the Orthodox churches is considered a key prerequisite to any reconciliation with the Vatican.

Planned since the 1960s, the synod will allow for major changes to the church to be proposed, but according to the experts, the meeting may not yield reforms since Orthodox churches remain divided. The Fener and Russian Orthodox churches have been competing for decades for ecumenical status in the Orthodox world. The Fener Patriarchate in Istanbul is seeking a "primus inter pares" or "first among equals" status among 12 churches, but the Moscow-based Russian Orthodox Church has questioned its attempts to do so.

The patriarchate, in its self-appointed ecumenical status, has been based in Istanbul since the time of the Byzantine Empire that collapsed after the Ottoman conquest of Constantinople. It has direct authority to assign and dismiss prelates in churches in several countries, from New Zealand to Panama. The patriarchate has a small congregation in Istanbul but many of its followers live abroad, mainly in the United States.