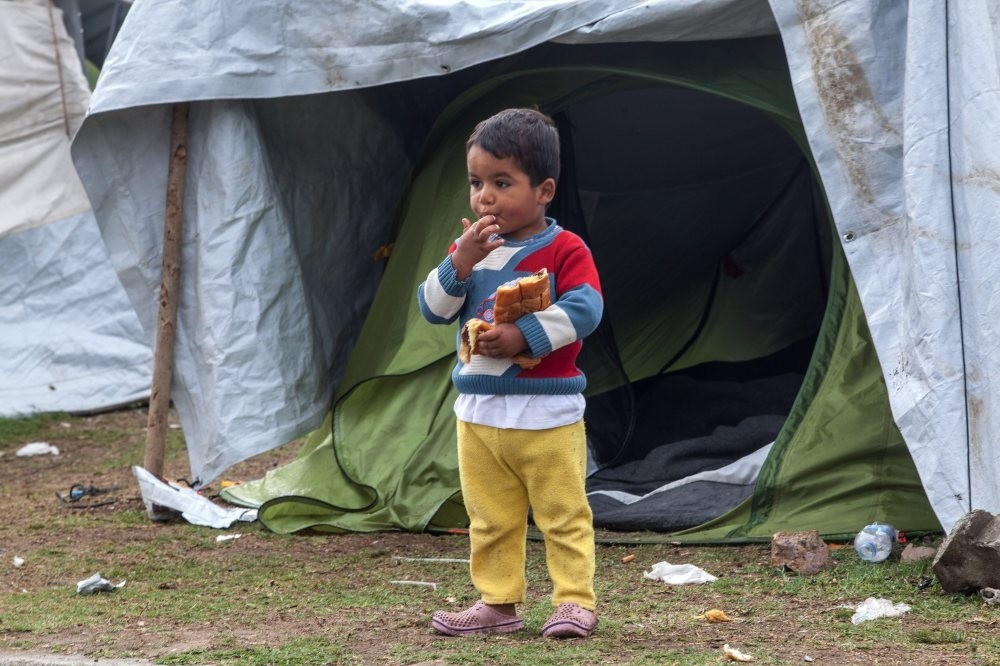 by Daily Sabah with Wires Jun 14, 2016 12:00 am
The U.N. human rights chief Monday decried a "worrying rise" in detentions of migrants in Greece and Italy and urged authorities to find alternatives to confining children while asylum requests are processed.

More than 1 million migrants, many fleeing the war in Syria, have arrived in Europe through Greece since last year. More than 150,000 have come in 2016 so far, 38 percent of them children, according to United Nations refugee agency data. Italy has also set up mandatory detention centers.

"Even unaccompanied children are frequently placed in prison cells or centers ringed with barbed wire. Detention is never in the best interests of the child, which must take primacy over immigration objectives," Zeid Raad al-Hussein said in a speech to the U.N. Human Rights Council in Geneva. "Alternatives to the detention of children must be developed," he told the start of a three-week council session.

Hussein said it was possible for Europe to create "well-functioning migration governance systems" with fair assessment of individual requests for international protection while removing what he called "hysteria and panic from the equation." Hussein deplored anti-migrant rhetoric "spanning the length and breadth of the European continent" that "fosters a climate of divisiveness, xenophobia and even, as in Bulgaria, vigilante violence."

In April, Bulgarian police arrested a local man who had posted video on social media showing how he tied up three migrants near the Turkish border. The migrant influx has drawn a rising public backlash, in part because of strains it has imposed on housing and social services. Concerns have also raised in some EU countries about their abilities to integrate the mostly Muslim migrants.

In western Germany on Sunday a man fired an air rifle at a refugee shelter, lightly wounding a 5-year-old Macedonian girl and an 18 year old, police said yesterday.

The 21-year-old man targeted the shelter from his third-floor apartment 40 meters away, police said in a statement. The mother of the Macedonian girl had noticed that her daughter's leg was hurt but initially thought someone had thrown stones at her. But shortly after, a witness saw the suspect shooting from his apartment, wounding an 18-year-old Syrian in the leg.

Police searched the man's apartment and removed an air rifle and pellets. The suspect was not detained as "there were no grounds for arrest," a police spokesman told Agence France-Presse (AFP). "It is unclear if the act was politically motivated," police said, adding that investigations are ongoing.

Some 923 offences against refugees and refugee facilities were recorded in 2015, against 175 the previous year, according to Interior Ministry statistics on political crime in Germany.

Recently, support for far-right populist parties across Europe has been surging, especially over fears of an influx of refugees fleeing violence and persecution in the Middle East and Africa. Political parties like Alternative for Germany (AfD) and France's National Front (FN) have adopted strong anti-immigrant and anti-Muslim rhetoric. Anti-immigration sentiments and xenophobia have become more visible as a result of efforts of anti-Islam and anti-immigrant initiatives like Patriotic Europeans Against the Islamization of the West (PEGIDA), which have staged anti-migrant rallies and drawn thousands of people across Europe. Despite warnings from European political figures, Islamophobia and xenophobic rhetoric still survive and have gained ground.
RELATED TOPICS