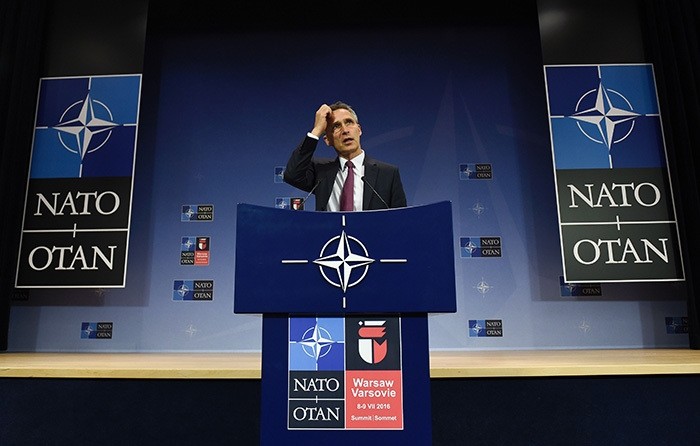 NATO Secretary-General Jens Stoltenberg speaks during a press confenrence following a meeting of NATO defence ministers with their Ukrainian counterpart at the NATO headquarters in Brussels on June 15, 2016. (AFP Photo)
by Anadolu Agency Jun 15, 2016 12:00 am

The secretary general said defense ministers had approved a deal on advice and assistance for Ukrainian forces, which have been embroiled in a two-year civil war with separatists in the country's east.

"Our aim is to help Ukraine establish more effective and efficient defense and security structures and to strengthen civilian control over them," he told journalists after a meeting of the NATO-Ukraine Commission in Brussels.

He said the new package would reinforce existing NATO projects in Ukraine on command and control, logistics, cyber defense and rehabilitating wounded soldiers.

"We are also developing new projects, including in the areas of countering hybrid warfare and explosive devices," he added. "Ukraine has ambitious plans to reform its security and defense sector...

"Modernising Ukraine's forces while they are engaged in conflict is no easy task. But the government is making good progress. Ukraine is committed to continuing reforms."

Stoltenberg was speaking ahead of a NATO summit in Warsaw next month, which will be attended by Ukraine's President Petro Poroshenko.

Ukraine has been wracked by conflict since April 2014 following Russia's annexation of Crimea from Ukraine. Fighting between Ukrainian government forces and pro-Russia separatists has seen around 9,300 killed, according to the UN.

"Allies do not and will not recognize the illegal and illegitimate annexation of Crimea," he said. "And we will continue to call on Russia to stop its destabilization of Ukraine. Russia needs to stop supporting the militants and withdraw its forces and military equipment from Ukrainian territory."

He called on all relevant parties to implement the Minsk agreements to bring an end to the conflict.

"The ceasefire violations continue every day," Stoltenberg said. "And OSCE monitors continue to be hampered in their important work."