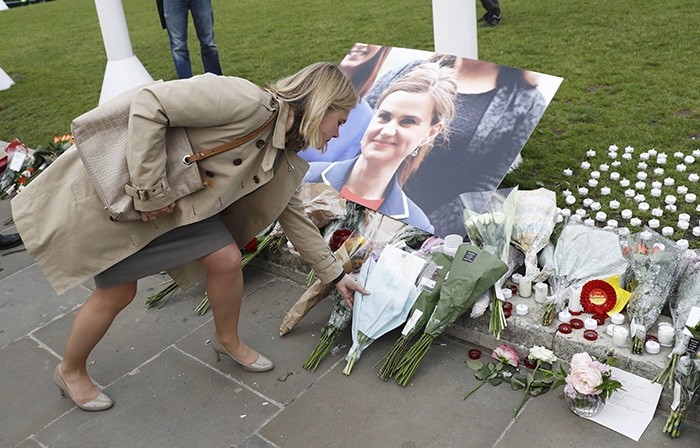 A woman leaves a floral tribute next to a photograph of murdered Labour Member of Parliament Jo Cox in Parliament Square, London, Britain June 17, 2016 (Reuters Photo)
by Daily Sabah with Agencies Jun 17, 2016 12:00 am

Britain mourned lawmaker Jo Cox after she was stabbed and shot dead by a suspected far-right extremist, an action that has thrown the June 23 referendum on EU membership into limbo

Britain was left reeling Friday after the murder of a lawmaker on a village street, an incident that froze campaigning on a referendum on European Union membership at its frantic peak a week before it occurs.

Jo Cox, a 41-year-old former aid worker and pro-EU campaigner from Labour known for her advocacy on behalf of Syrian refugees, was shot and repeatedly stabbed in her own constituency near Leeds in northern England by a man who witnesses said had shouted, "Britain first."

She was pronounced dead just over 48 minutes later by a doctor working with a paramedic crew trying to save her life. A 52-year-old man was arrested by officers nearby and weapons, including a firearm, were recovered.

A U.S. civil rights group said the man arrested over the slaying of a British lawmaker had links to an American white supremacist organization. The Southern Poverty Law Center, once the primary neo-Nazi organization in the United States, said it has records showing Thomas Mair was a supporter of the National Alliance. The center said Friday that Mair purchased a manual from the group in 1999 that included instructions on how to build a pistol.

The National Alliance was founded by William Pierce, who died in 2002. His book, "The Turner Diaries," has been called a grisly blueprint for a bloody race war. Timothy McVeigh based the 1995 bombing of the Oklahoma City federal building, which killed 168 people, on a truck-bombing described in the book.

Both the Leave and Remain sides announced they would halt campaigning as a mark of respect, as commentators questioned whether the tone of the campaign had been divisive.

The murder overshadowed a by-election victory by Cox's opposition Labour Party in the London district of Tooting in the early hours of Friday. "Given the horrific events of today and the shocking death of Jo Cox, I do not intend to make a speech," the newly elected deputy, Rosena Allin-Khan, told the subdued counting center. "Jo's death reminds us that our democracy is precious but fragile, we must never forget to cherish it." In addition to being a lawmaker, Cox was a former aid worker.

Dozens gathered outside the Houses of Parliament in a vigil to remember Cox, an event which was attended by Labour party leader Jeremy Corbyn, and which saw him flanked by tearful party colleagues. "We've lost a wonderful woman, we've lost a wonderful member of Parliament, but our democracy will go on," Corbyn said. "What's happened is beyond appalling. We are here in silent memory of her loss," he added as rain began to fall.

"She was a fearless campaigner, and a voice for the voiceless. We feel shaken," said Fatima Ibrahim, an activist with campaigning organization Avaaz. In the quaint streets of Birstall, the scene of the attack was cordoned off and police could be seen examining a shoe and a handbag. Mourners left flowers nearby in tribute.

Prime Minister David Cameron said the killing of Cox, who had worked on U.S. President Barack Obama's 2008 election campaign, was a tragedy. "We have lost a great star," said Cameron, who is responsible for calling the EU referendum. "She was a great campaigning MP with huge compassion, with a big heart. It is dreadful, dreadful news."

Hillary Clinton said she was horrified. German Chancellor Angela Merkel called the attack "terrible" but added that she didn't want to link it to the EU referendum.

Britain's Union Jack flag was flying at half-mast over the Houses of Parliament, Downing Street and Buckingham Palace, while in Birstall hundreds of people attended a vigil at a local church. Some people, many weeping, laid flowers outside the Houses of Parliament. Others threw flowers onto the houseboat on the Thames where Cox had lived with her husband and young children.

Police said an investigation was under way to determine the motive for the murder. One witness of the attack, cafe owner Clarke Rothwell, told the Press Association that the gunman had shouted "put Britain first" repeatedly during the attack.

Britain First is a far-right anti-immigration group, which released a statement saying it was "obviously not involved" and "would never encourage behavior of this sort."

The brother of the suspected attacker, Scott Mair, told the Daily Telegraph: "Thomas is not violent and is not all that political. … He has a history of mental illness, but he has had help." The newspaper also reported that Thomas Mair had been a subscriber to a magazine published by a South African pro-apartheid group.

In the wake of the attack, commentators questioned whether the tone of the EU referendum campaign had stirred up ugly currents. Before the suspension of the campaign, polls had indicated the result of the referendum could be on a knife-edge following an uptick in support for the Leave side.

Cox, whose first speech in Parliament defended immigration and diversity, lived with her husband Brendan and their two children aged three and five on a houseboat on London's River Thames.

When the news of her death broke, Brendan issued an impassioned appeal for unity against hatred. "She would have wanted two things above all else to happen now," he wrote. "One, that our precious children are bathed in love and two, that we all unite to fight against the hatred that killed her."

Gun ownership is highly restricted in Britain, and attacks of any nature on public figures are rare. The last British lawmaker to have been killed in an attack was Ian Gow, who died after a bomb planted by the Irish Republican Army (IRA) exploded under his car at his home in southern England in 1990.