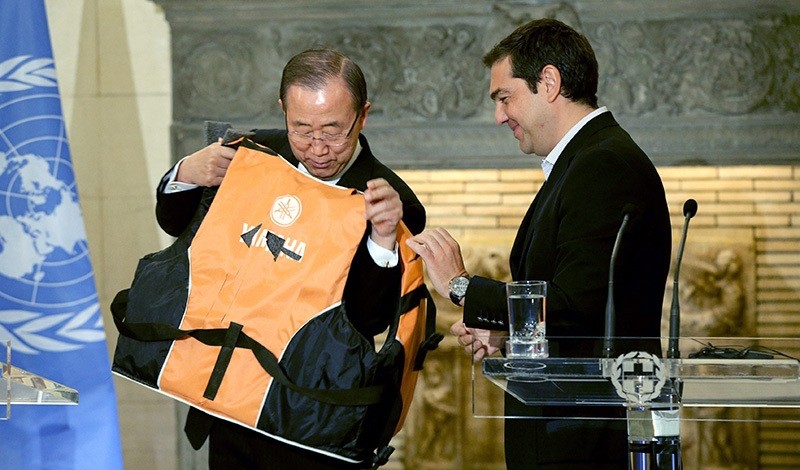 UN Secretary General Ban Ki-moon was given a life jacket by Greek Prime Minister Alexis Tsipra on Saturday, during a visit to Greece to take a look at the migration crisis which shook Europe, as tens of thousands of migrants remain blocked at the doorstep to the EU.

"You come at a particularly critical moment for peace, stability, and security in the wider region," said Tsipras, welcoming Ban at the Maximos Mansion.

The United Nations' role is particularly critical for protecting international law and ensuring peace and stability, for the Syrian crisis and its huge refugee flows, and also for the crisis in Libya and efforts to solve the Cyprus problem, added Tsipras.

At his talks with Tsipras, Tsipras gave the U.N Chief a life jacket found, like thousands of others, on the Greek islands, belonging to migrants who crossed the Aegean Sea with the hope to reach Europe.

"It's a symbolic gift, a life-saving tool for thousands of refugees who arrived in the Greek islands after crossing the Aegean Sea," Tsipras said in presenting the item to him.

Ban put on what he called an "important gift" but then quickly took it off as he thought of the thousands who never made ashore.

The UN chief said he was "deeply distressed" by the large number of refugees who have lost their lives in crossing the Aegean as well as the Mediterranean route from north Africa.

Since the beginning of the year, around 2,510 people have died in the Mediterranean compared with 1,855 in the same period last year, according to the International Organization for Migration.

The Greek government says over 56,000 migrants have been trapped in Greece after Balkan states began shutting their borders in February to stem a growing influx into wealthy northern Europe.

Most of them are now in state-run camps that aid groups including the UN refugee agency have labelled poorly equipped and inappropriate for a long stay.

On Friday, medical aid group Doctors Without Borders cited the agreement with Turkey as one of the reasons behind a decision to stop accepting EU funds.

Over the past year and a half more than 1 million refugees and migrants, many from Syria, have arrived on the Greek islands, and Ban praised Greeks for showing "remarkable solidarity ... as Greece faces tremendous challenges of so many desperate people fleeing war and persecution."

Speaking after talks with Prime Minister Alexis Tsipras in Athens, Ban also hailed Greece for managing the refugee influx at the same time as grappling with its huge debt crisis.

"Despite the country's economic difficulties, Greece has been saving human lives," he said, adding that country deserves the support of the international community "and should not be left on its own to face this challenge."

Ban's next stop in Greece later Saturday was the flashpoint island of Lesbos to visit the refugee camps.

Lesbos and other eastern Aegean islands last year were the gateway into Europe for a migration wave unseen since World War II.

According to UN figures, Lesbos alone accounted for around 500,000 arrivals in 2015.

A migration deal between the European Union and Turkey put into effect on March 20 has drastically reduced the flow, but at the cost of human rights violations according to rights groups.

Since then, around 3,000 migrants have arrived in Greece with over 460 of them sent back to Turkey, where critics say they face discrimination and possible danger.

A relocation program promising to move successful asylum claimants to other EU states has made little headway.