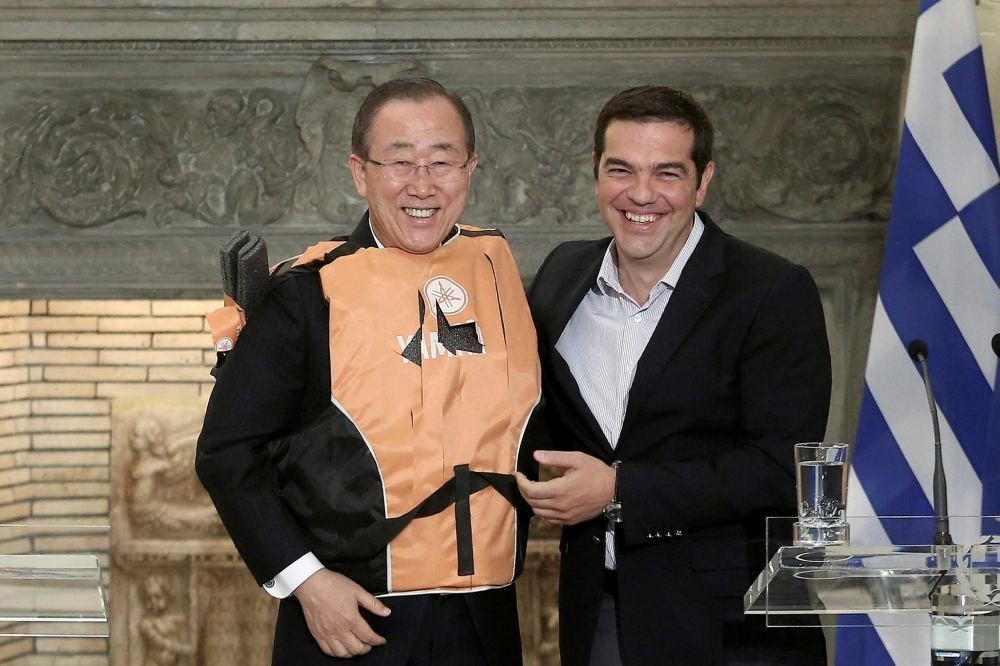 The two leaders have been criticized for smiling while Greek PM Tsipras (R) was giving a lifejacket to Ban Ki-Moon as lifejacket has become symbol of tragedy.
by Daily Sabah with AFP Jun 20, 2016 12:00 am

U.N. chief Ban Ki-Moon said Saturday that the "detention" of migrants who have arrived in Greece since March should cease immediately, as he visited the frontline of the migration crisis engulfing Europe. He made the comments after visiting two camps on the Greek island of Lesbos, where some 3,400 migrants are being held while officials assess whether they can legitimately claim asylum. "Detention is not the answer, it should end immediately," said Ban, who held talks with Greek Prime Minister Alexis Tsipras in Athens earlier in the day. "I recognise the difficulties but the world has the wealth, the capacity and the duty to meet these challenges," he said on Lesbos, the entry point for hundreds of thousands of migrants arriving in the EU last year. "These people have been through the worst," Ban added. "The people of Lesbos are showing the world the best, you have opened your homes, hearts and wallets to support people in need." Under a controversial deal between the European Union and Turkey that came into force in March, failed asylum seekers face being sent back from the Greek islands to Turkey. More than 45,000 migrants are currently trapped on Greek territory, following not just the EU-Turkey deal but also a string of border closures in Balkan countries to the north. Most of the migrants are now in state-run camps that aid groups including the U.N.'s refugee agency have labeled poorly-equipped and inappropriate for a long stay.

Ban praised Greeks for showing "remarkable solidarity ... as Greece faces tremendous challenges of so many desperate people fleeing war and persecution". Greece's Aegean holiday islands have seen more than a million refugees and migrants arrive over the last year-and-a-half, many of them Syrian refugees - seeking new lives elsewhere in the EU. Lesbos alone accounted for around 500,000 arrivals in 2015, according to U.N. figures, as Europe battles its worst migration crisis since World War II.

A relocation program promising to move successful asylum claimants to other EU states has made little headway. "The international community must do more to resolve conflicts and address the factors causing so much suffering and upheaval," Ban said. "We must stand together against the border closures, barriers and bigotry and against the criminals and predators who traffic in human beings. I call on the countries of Europe to respond with a human and human rights-based approach, " the U.N. secretary-general added. At talks earlier Saturday hosted by Tsipras in Athens, the Greek leader gave Ban a life-jacket that was discarded, like thousands of others, by a migrant arriving on a flimsy boat. "It's a symbolic gift, a life-saving tool for thousands of refugees who arrived in the Greek islands after crossing the Aegean Sea," Tsipras said as he presented the item to the U.N. chief. Ban put on the jacket, calling it an "important gift," but then quickly took it off as he thought of the thousands who never made ashore. The U.N. chief said he was "deeply distressed" by the large number of refugees who have lost their lives in crossing the Aegean as well as the Mediterranean route from North Africa. Since the beginning of the year, more than 2,500 people have died in the Mediterranean compared with 1,855 in the same period last year, according to the International Organization for Migration.

More than 1 million migrants entered Europe last year, many fleeing wars in the Middle East. Europe has been slammed for lacking a collaborative response to the crisis. The U.N. refugee agency encouraged European countries to do more to share the burden of the international community in the migrant crisis, especially when compared to Syria's neighboring countries. Turkey currently hosts the most Syrian refugees, nearly 3 million.
RELATED TOPICS