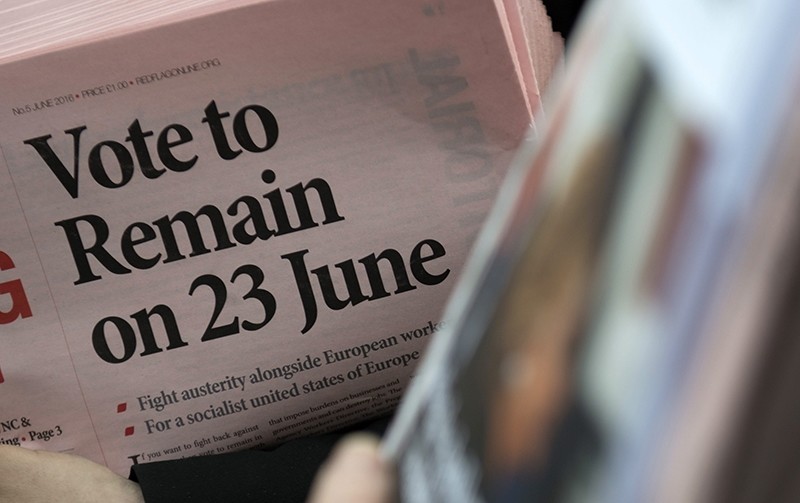 A participant holds a newspaper showing 'Vote to Remain on 23 June' headline as members of the public take part in a 'Remain In' Rally in Trafalgar Square, Central London, Britain (EPA Photo)
by Anadolu Agency Jun 21, 2016 12:00 am

A senior member of the German government has said the EU should change after Thursday's Brexit referendum-regardless of the result.

German Finance Minister Wolfgang Schauble told a business conference on Tuesday: "Even if the majority would decide to stay within, we won't be able to go business as usual. Because if we were to do that, people would say you haven't understood the point."

The U.K. will hold a nationwide referendum on Thursday on whether it should leave or stay in the 28-nation bloc. Recent polls show a tight race between the pro-EU and pro-Brexit camps.

Schauble underlined that many concerns raised by British voters were also shared by EU citizens of the other 27 member states.

"There are more and more countries, to some extent in all member countries, to different degrees, [which] have a great number of people who doubt the European project of unification," he said.

Schauble argued that the EU can use the crises it currently faces as an opportunity to change and achieve further progress.

"For the time ahead we should concentrate all over Europe on having flexible and pragmatic measures," he stressed.

"Problems can only be solved if we have a strong Europe," he said.

Speaking on the same panel discussion, former French president Nicolas Sarkozy emphasized the importance of France and Germany showing leadership together within the EU to overcome major political, economic and security challenges.

"In order to save Europe from the current situation we need to have one thing happening in the next few months and that is to come up with a Franco-German initiative with a new European treaty," Sarkozy said, adding that he already shared this view with Chancellor Angela Merkel during a lunch on Tuesday.

Sarkozy, a long-time opponent of Turkey's EU accession, renewed his strong opposition to a full membership, despite Turkey's growing importance for the EU in addressing the refugee crisis and security challenges posed by conflicts in the Middle East.

The French conservative leader, who is rumored to be considering running for the presidency again in next year's election, proposed an alternative relationship between the EU and Turkey.

"Turkey is a huge, great civilization; we need to work with Turkey, we need to talk to Turkey. But I am absolutely convinced that Turkey is not appropriate as a member of the EU," he argued.

"I am in favor of setting up some new community, outside of Europe, a sort of community where we have Russia, Turkey and the EU as sort of partners. That would make sense," he added.