Polls show "In" vote ahead with narrow lead 2 days to referendum, Cameron urges to rethink Brexit 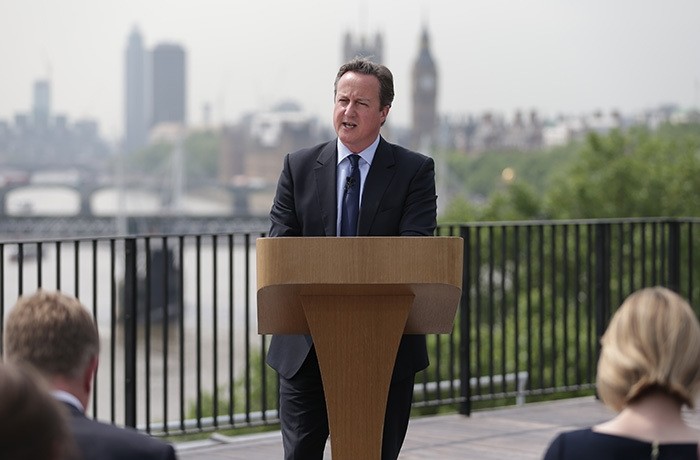 British Prime Minister David Cameron delivers a speech on the upcoming EU referendum at the Savoy Place in London on June 7, 2016. (AFP Photo)
by Compiled from Wire Services Jun 21, 2016 12:00 am

Prime Minister David Cameron appealed directly to older Britons considering voting to leave the European Union, urging them on Tuesday to think about the hopes and dreams of their children and grandchildren in casting their ballots.

"They can't undo the decision we take," he said. "If we vote out, that's it. It's irreversible," he added.

Two days before a referendum on EU membership, Cameron appealed directly to the most Euroskeptic segment of the population. Standing in front of the black door of his office on 10 Downing St., he said leaving the bloc would risk the country's economic security — and younger generations would have to live with the consequences.

The campaign for Britain to stay in the European Union has seen its lead over the rival "Out" camp cut to just one point, according to an opinion poll published on Tuesday, two days before the country's historic EU membership referendum.

The poll, conducted by Survation for spread-betting firm IG, put support for "In" at 45 percent ahead of "Out" on 44 percent, IG said.

The findings seemed to wrong-foot some investors after several other recent opinion polls suggested that momentum had swung back towards the "In" camp after the killing of a British lawmaker who supported EU membership, and that voters were becoming more nervous about the economic risks of a Brexit.

News of the poll erased some of the recent gains for sterling and pushed up the price of safe-haven British government bonds.

Survation's previous poll, for the Mail on Sunday newspaper and published late on Saturday, had shown In ahead of Out by 3 percentage points.

The new Survation poll was conducted by telephone on Monday, IG said.

Excluding the 11 percent of respondents who answered "don't know", it gave "In" a lead of 51-49 percent, IG said

Two other opinion polls published late on Monday gave contradictory signals about the likely outcome of the referendum as one showed In moving further ahead while the other put Out back in the lead.

"We've got two days to go with the campaign. It would exaggerate the ability of 1,000-sample poll to say this is a callable situation. It is too close to call," said Damian Lyons Lowe, chief executive of Survation.

"The comparable event would be the Scottish independence referendum, and ... we never showed a 'Yes' lead. It looks to us much tighter and it will come down to factors such as turnout and the last days of the campaign and where public opinion shifts in the final moments," he added.

Cameron's appeal seemed directed at many who grew up in the shadow of the moment when Britain was a great empire — the nation that stood against the bulwark of Nazi tyranny during World War II. These voters, many of them Conservatives, have seemed prepared to ditch the EU project all together.

Cameron tried to assure them that Britain remains a great country — even if it is part of a 28-nation bloc.

"Brits don't quit," he said. "We get involved, we take a lead. We make a difference. We get things done."

The measured and statesmanlike plea came as the already heated campaign moved into its tense final days. Campaigners on all sides sought to sound as if they were calm and under control, sharpening their messages as voters think about their moves.

Earlier former London Mayor Boris Johnson expressed disapproval of a poster showing a column of migrants wishing to enter the EU — a view that underscores a deepening rift among campaigners promoting Britain's exit from the 28-nation bloc.

Johnson, one of the most prominent campaigners on the "leave" side, distanced himself from U.K. Independence Party leader Nigel Farage, who has been widely criticized for a poster showing non-white immigrants massing on the borders with the words "BREAKING POINT" emblazoned across it.

Britain's anti-EU campaigners have long been bitterly divided but the squabbles appear to be intensifying as Thursday's referendum draws near. Johnson's Vote Leave won Electoral Commission approval to be the official standard bearer of the campaign, but Farage has fought on nonetheless.

Johnson told LBC radio the poster had "xenophobic undertones" and insisted the official Vote Leave campaign had nothing to do with it.

"I didn't like it," he said. "It seemed to be saying that these were bad people coming to our country. That seemed to be the message. I felt profoundly unhappy with it."

Johnson repeatedly refused to say whether he had spoken with Farage in recent weeks, saying "I want to talk about our campaign."

The poster has caused restlessness on the "leave" side, coming into public view as it did in the hours before lawmaker Jo Cox was killed in a knife and gun attack while working in her Yorkshire constituency.

In an extraordinary session in Parliament on Monday, legislators urged an end to angry and divisive politics in honor of their slain colleague.

The British pound and global stock markets surged as shock at the death of the pro-Europe Cox seemed to sap momentum from campaigners fighting for the United Kingdom to leave the European Union. The pound rose to its highest point since early January in trading Tuesday, hitting $1.47.

Billionaire currency trader George Soros added support to the case for "remain" on Tuesday, warning that a vote for Britain to leave the EU will trigger a plunge in the pound — without benefits that can come with a devalued currency.

In an op-ed piece in Tuesday's Guardian, Soros says a decision to leave the 28-nation bloc in Thursday's vote will cause the sterling to drop quickly. Soros predicted the drop will be more dramatic than when Britain crashed out of the European Exchange Rate Mechanism in September 1992.

Soros substantially profited — at the expense of the Bank of England and the British government — when the pound lost 15 percent of its value.

He said it is reasonable to assume that after a Brexit vote the pound would fall by at least the same level of 15 percent or possibly more than 20 percent from its present level to below $1.15. The pre-referendum trading range was $1.50 to $1.60

"If sterling fell to this level, then ironically one pound would be worth about one euro - a method of "joining the euro" that nobody in Britain would want," he wrote.

Soros says those who believe a "leave" vote will have no impact on their personal finances are guilty of "wishful thinking."

He said that a large devaluation would hurt the economy for several reasons, the first of which being that the Bank of England would not cut interest rates — which are already at a record low.

"A post-Brexit devaluation is unlikely to produce the improvement in manufacturing exports seen after 1992, because trading conditions would be too uncertain for British businesses to undertake new investments, hire more workers or otherwise add to export capacity," he said.

Soccer star David Beckham and his wife, fashion designer Victoria Beckham, also threw their support behind those campaigning to keep Britain in the European Union.