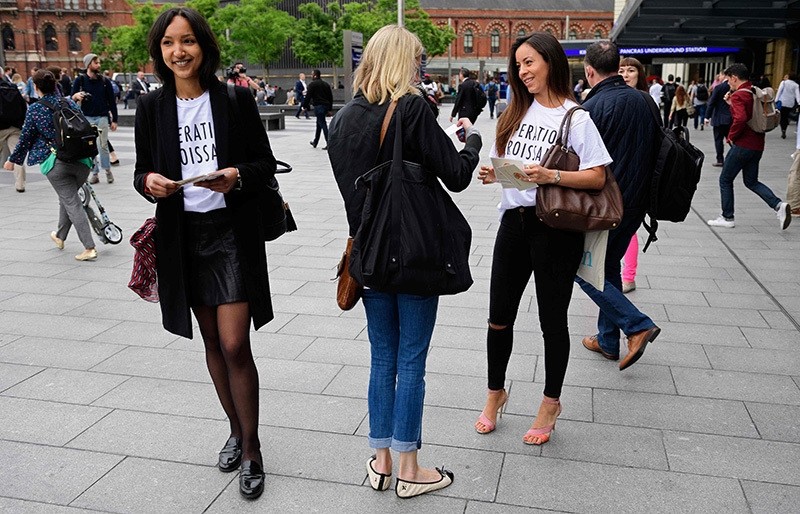 Pro-remain campaigners from ,Operation Croissant,, a French pro-EU group, hand out postcards written by Parisians urging people in the UK to vote to remain in the EU, to commuters at Kings Cross Station in London on June 22, 2016 (AFP Photo9
by Jun 22, 2016 12:00 am

British police swooped to stop a Paris-baked plot to tempt Britons to stay in the European Union by handing out free, freshly baked croissants.

Police intervened on the eve of Wednesday's caper, telling volunteers from the French capital it would be illegal to offer food in the run-up to an election because it could corrupt the result.

The group of about 15 volunteers had brought hundreds of croissants to London on the Eurostar train from Paris, said organiser Rosa Rankin-Gee.

After being informed of the law, however, they instead decided to hand the French breakfast staple to a homeless shelter, with no political message attached, she said.

Deprived of their pastries, the activists handed out love letters -- postcards with often handwritten messages they had collected from French nationals pleading with their cross-Channel friends to stay in the EU.

"Because what would you do without French kiss?" read one of the cards, offered to passers-by in the morning rush hour outside the busy King's Cross railway station in central London.

Some people walked on without taking the postcards but others were intrigued by the interest their French neighbours have taken in the referendum.

"I've already made my mind up," she said. "I'm on the side of the croissant."

Amy Ferguson, 33, who by coincidence works for a company making croissants, said she, too, had already decided to vote in, but added: "I think it's nice that they have sent us this. I'm touched."

Rankin-Gee said the pro-EU volunteers wanted to make a gesture that contrasted with the often bad-tempered main debate, in which Prime Minister David Cameron is leading the push to stay in.

"We're all aware of how vitriolic the campaign has been and we wanted to do something happy, to make people smile," said the 29-year-old campaigner, who lives between Paris and Britain.

On the postcards, people write about "their love for our eccentricity or our music" or about their families' Anglo-French connections, she said.

After a long and often bitter campaign, opinion polls indicate the race is close.

The "Remain" camp is on 51 percent and "Leave" is on 49 percent, according to a poll of polls by the What UK Thinks project, which excludes undecided voters.