French unions win right to protest despite fears of violence 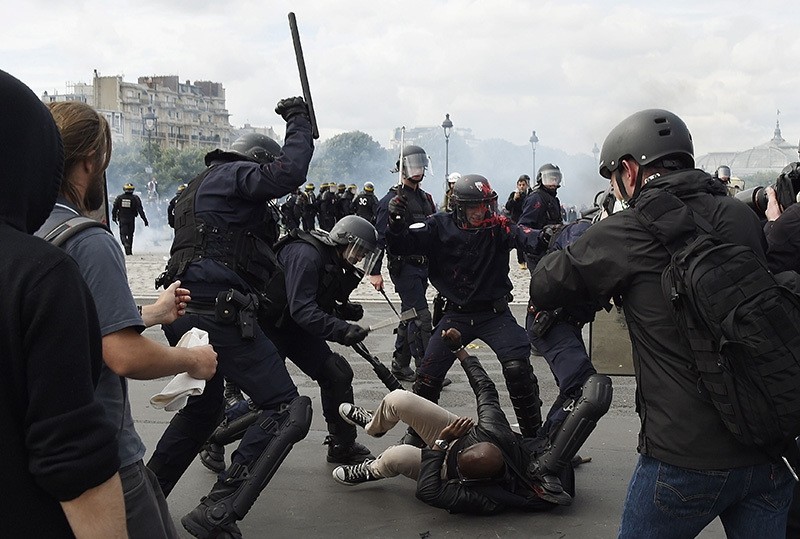 Police officers clash with a demonstrator near the Invalides during a protest against proposed labor reforms in Paris on June 14, 2016 (AFP).
by daily sabah Jun 22, 2016 12:00 am

French unions have won the right to organize a demonstration despite the government wanting to ban the march. The situation in France is worrying in terms of security as the country hosts the Euro 2016 tournament

The French government and unions reached a compromise Wednesday allowing a new labor march in Paris, amid heightened political tensions and security fears after recent protest violence that injured dozens and damaged a renowned children's hospital. The debate about the protest march planned for Thursday had taken on national importance, echoing a larger battle raging for months over a government bill rethinking France's cherished but costly worker protections. Paris police on Wednesday banned the protest, saying they could not ensure safety. Leftist lawmakers and union members threatened to defy the ban, condemning the move as a violation of the people's right to protest. The interior minister met with union leaders, who emerged announcing a compromise deal for a march around the Bastille neighborhood that will be much shorter than originally planned. It's part of protests around France and a one-day strike Thursday against a bill that makes it easier to lay off employees, extends the work week and weakens union powers. The bill has prompted months of protests that often degenerate into violence by small groups of extremist demonstrators clashing with tear gas-spraying riot police.

It was the first time a union-backed protest had been banned since the early 1960s, drawing condemnation from lawmakers across the political divide and stirring tensions within an already deeply-divided ruling Socialist Party. The last big Paris protest, which passed through the Montparnasse and Invalides neighborhoods on June 14, was particularly violent, with at least 39 people injured and damage to dozens of shops, banks, bus stops, a nursery school and a government ministry, and the Necker Hospital for Sick Children, where windows of operating rooms were smashed. Ahead of Thursday's march, Paris authorities asked protest organizers to hold a stationary rally instead of a march through the capital, so that police could better isolate troublemakers. The CGT union, which has been leading the protest movement, refused a stationary march. The ban announcement Wednesday may have forced the unions to a shorter compromise route. "It's always better when we communicate" in person, CGT leader Philippe Martinez said after meeting Interior Minister Bernard Cazeneuve. Martinez told reporters later that unions would have extra security protecting their marchers but said it was up to police to stop troublemakers. The labor strife has divided the Socialist government and further weakened President Francois Hollande. The government softened the labor bill in response to some union demands but then forced it through the lower house of Parliament without a vote because of resistance from the party's hard-left flank. The move further angered protesters. The bill is now being debated in the conservative-controlled Senate.

Violence on the fringes of recent protests has stretched a police force already challenged by the demands of a state of emergency in place since Islamist militant attacks on Paris last November and fan violence during the Euro 2016 tournament. The unions have been protesting since early March against planned reforms to loosen labor regulations and make hiring and firing easier. Trade unions say the proposal will erode the rights of workers, while the government says it is key to tackling unemployment. Wednesday's compromise over the protest could spur hopes for a broader agreement on the draft law which is currently being debated in the Senate, said Frederic Dabi of Ifop pollsters. "French voters don't like the law but they also want this to be over with," Dabi said. "They consider the government and the unions are both responsible for the stalemate," he said, adding the government U-turn on the ban showed how tense the situation was. Interior Minister Bernard Cazeneuve authorized a 1.5 km loop around a waterway at the foot of the Place de la Bastille square. A police union official said ensuring security would be manageable as long as officers had the authority to arrest known troublemakers on sight. A Paris police statement had earlier complained of "the heavy demands... on the security forces for several months" and pointed to the need for "reinforcements linked to the hosting of the Euro and the scale of the terrorist threat".