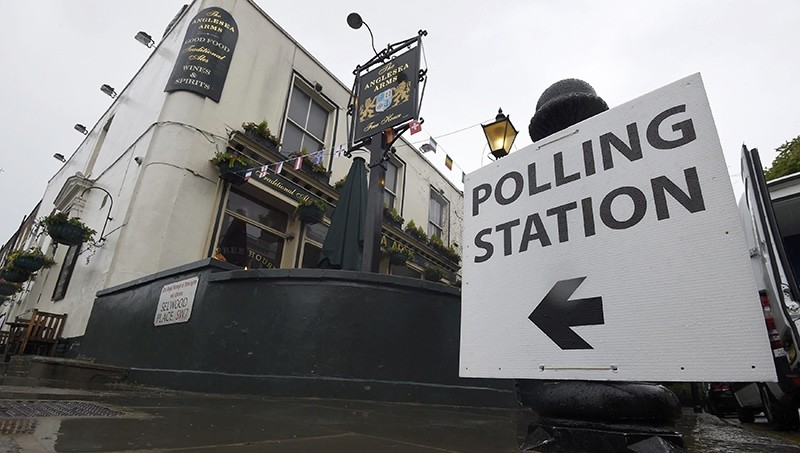 A sign points to a pub being used as a polling station for the Referendum on the European Union in west London, Britain, June 23, 2016 (Reuters Photo)
by Compiled from Wire Services Jun 23, 2016 12:00 am

Millions of Britons began voting Thursday in a bitterly-fought, knife-edge referendum that could tear up the island nation's EU membership and spark the greatest emergency of the bloc's 60-year history.

Support for remaining in the European Union stood at 55 percent, with 45 percent supporting a Brexit, according to an online Populus poll released on Twitter on Thursday while voting was under way in Britain's referendum.

Populus said the survey of 4,700 was carried out on Tuesday and up to midnight on Wednesday night.

A record 46.5 million voters were registered to decide Britain's future in the 28-nation European Union, which was born out of a determination to unite in lasting peace after the carnage of two world wars.

Across much of southeast England, many voters braved heavy rain and thunderstorms, which flooded some London streets, to reach polling stations.

In one of the last opinion polls before the vote, "Remain" took a lead with 48 percent, notably ahead of "Leave" on 42 percent. The rest were undecided, said the telephone survey by ComRes for the Daily Mail and ITV News.

Two other polls published on the eve of the referendum -- both conducted over the Internet -- had put the "Leave" camp ahead by one or two percentage points, well within the margin of error.

World financial markets appeared to be banking on a "Remain" victory. In Tokyo trade, sterling briefly hit $1.4844 -- its highest level so far this year.

Financial institutions are reinforcing their trading teams to cope with the prospect of frantic trading through the day and the world's leading central banks say they are ready to react to any eventuality.

With no exit polls taking place, the result is unlikely to begin emerging before about 0300 GMT Friday.

"Our polling station had a queue of people waiting to get in at 7 am -- first time anyone can remember that on polling day," voter Nick Turner in northwestern Cumbria said on Twitter.

Under clear skies in Glasgow, Scotland, people were waiting to cast a ballot.

"It would be silly to leave," the first voter, Gemma Rosario, a 24-year-old office worker, told AFP. "Being in the EU is an advantage for Scotland."

The often acrimonious, deeply emotional campaign has exposed a gulf between Britons on the membership of Europe, with immigration and the economy the hot-button issues.

The Thursday editions of British newspapers captured the drama of voting day. "Independence day" was the headline of the pro-Brexit Sun, while The Times called it a "Day of reckoning".

Leading Brexit backer Boris Johnson, a former London mayor who is widely touted as a future prime minister, insisted the "Leave" campaign was on the brink of victory.

"I do think that we are on the verge, possibly, of an extraordinary event in the history of our country and indeed in the whole of Europe," Johnson said in a final scramble for support on Wednesday.

Prime Minister David Cameron, who faces calls to resign if there is a "Leave" vote, implored people to stay in the bloc at his final rally.

"Winston Churchill didn't give up on European democracy... and we shouldn't walk away," he said. "Our economy will suffer if we leave."

EU leaders have warned Britons that there would be no turning back from a vote to quit.

"Out is out," European Commission chief Jean-Claude Juncker said Wednesday, dismissing any talk of a post-vote renegotiation of Britain's membership terms.

French President François Hollande warned an exit would be "irreversible".

A British withdrawal from the EU would trigger a lengthy exit negotiation, leading to the loss of unfettered access to its partners in the EU's single market and forcing the country to strike its own trade accords across the world.

In Europe, the referendum has raised concerns of a domino effect of exit votes that would imperil the integrity of the bloc, already buffeted by the eurozone and migration crises.

Though many voters fret over the financial consequences of a Brexit, others relish the prospect of taking back power from Brussels and reining in high levels of immigration.

The referendum battle had paused for three days after the brutal murder of Jo Cox, a pro-"Remain" lawmaker and mother of two who was stabbed, shot and left bleeding to death on the pavement a week before the vote.

"Jo's killing was political. It was an act of terror," her husband Brendan Cox told around 5,000 people gathered in London's Trafalgar Square on Wednesday on what would have been her 42nd birthday.

Thomas Mair, 52, has been charged with Cox's murder.

At his first appearance in court on Saturday, he gave his name as "Death to traitors, freedom for Britain". A psychiatric report was requested.

EU leaders will open a two-day summit in Brussels on Tuesday to deal with the outcome and decide how to cope with the risk of similar referendums on the continent that could threaten the bloc's integrity.