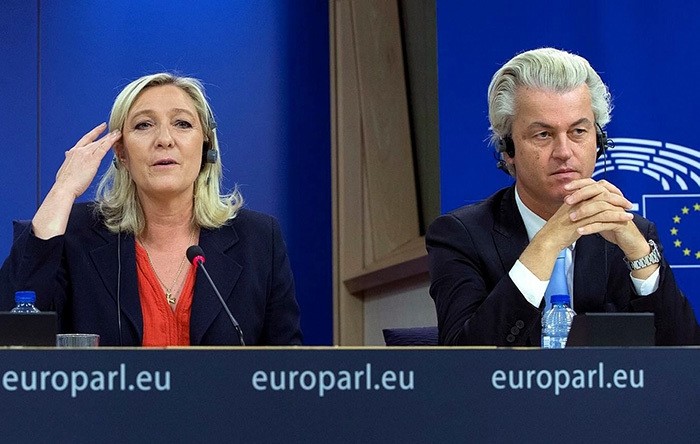 Eurosceptics have called on referendums in other EU states after Britons voted 52 percent to 48 percent on Thursday to leave the EU. Far-right leaders call for exiting the EU to take greater control of their country's economy and borders.

Eurosceptics cried victory early Friday after Britain voted to leave the EU, demanding referendums in their own countries and sharpening concerns about the future of European unity.

French far-right leader Marine Le Pen said on Friday there should be a similar referendum about EU membership in France after Britons voted to leave the 28-nation bloc.

"A victory for Freedom," Le Pen tweeted. "We now need the same referendum in France and in EU nations."

In the Netherlands, her ally Geert Wilders of the far-right PVV party also immediately called for a similar plebiscite.

Britons voted 52 percent to 48 percent on Thursday to leave the EU to take greater control of the country's economy and its borders. The decision has shocked global markets and sent the pound plummeting to the lowest level in 31 years.

In the Netherlands -- like France, one of the six founding members of the European community -- anti-Islam and anti-immigrant MP Geert Wilders also congratulated Britons on their "Independence Day."

"The Dutch people deserve a referendum as well. The Party for Freedom consequently demands a referendum on NExit, a Dutch EU exit," Wilders said in a statement.

Elections are not due in the Netherlands until 2017, but since last year polls have consistently shown support for the Freedom Party (PVV) climbing on the back of the migration crisis.

Wilders vowed that if he becomes prime minister next year "there will be a referendum in the Netherlands on leaving the European Union as well. Let the Dutch people decide."

In a separate Tweet using the hashtag #ByeByeEU, Wilders added: "Hooray for the Brits! Now it's our turn." He told Dutch broadcaster NOS he wanted to see a referendum in his country "as soon as possible."

Denmark's populist anti-immigration party called on Friday for a referendum on the country's membership of the European Union following Britain's decision to leave, but the prime minister rejected such a possibility.

The Danish People's Party (DF), an ally of the right-leaning government, said it wanted a referendum about continued membership once Britain has negotiated the terms for its future cooperation with the union.

"I believe that the Danes obviously should have a referendum on whether we want to follow Britain or keep things the way we have it now," DF party leader Kristian Thulesen Dahl told broadcaster DR.

The DF is not in government but is one of three parties supporting the one-party administration. In total, the four parties have only one seat more than the opposition bloc. The DF holds 37 seats in the 179-seat parliament.

Its call for a popular vote was echoed by the head of the left-wing Red-Green Alliance. Those two parties hold 51 seats, while the minority government holds just 34 seats and depends on other parties to pass laws.

Prime Minister Lars Lokke Rasmussen rejected the calls, but acknowledged that the British vote raised the possibility of a "slimmer EU".

"We belong in the EU," Rasmussen told a news conference. "I do not foresee that there will be a situation in the foreseeable future where we need to take a break with that".

An opinion poll this week showed 59 percent of Danes would be against holding a referendum similar to the British on EU membership, while 33 percent were for a vote.

Meanwhile, the European Union must reform itself, but is still key to Italy's destiny, Italian Prime Minister Matteo Renzi said as he reacted to the Brexit vote.

"We have to change it to make it more human and more just. But Europe is our home, it is our future," Renzi says on Twitter and Facebook.

In a post on Facebook, Palin said that the vote outcome is a sign of Britain's "choosing independence from global special interests and affirming status that controls its own borders and protects its own people."