UK votes to leave the EU in historic referendum 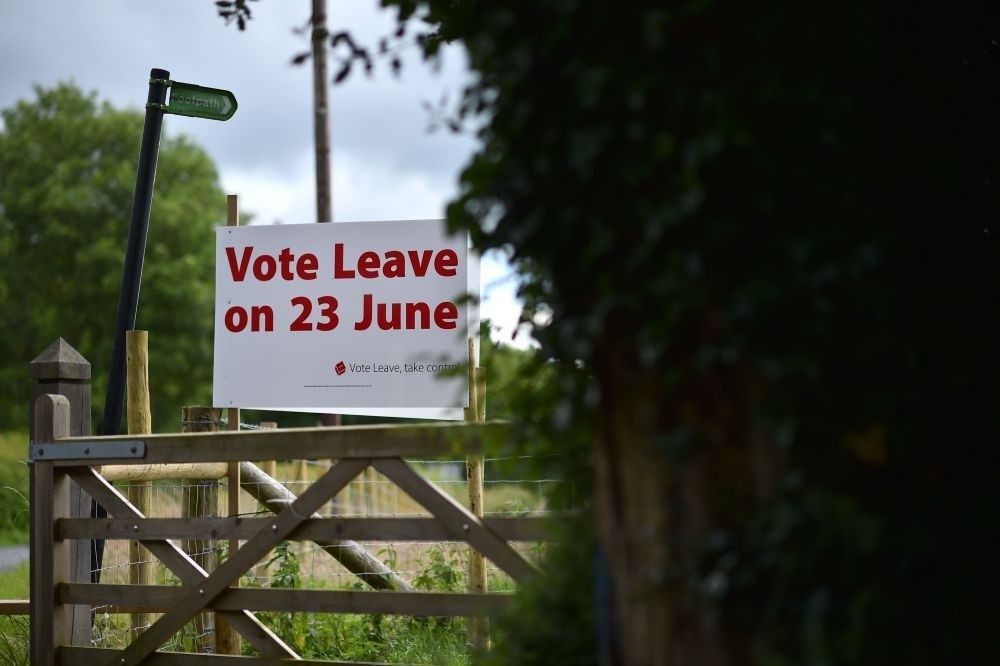 A 'Vote Leave' sign by the roadside near Tunbridge Wells urging to vote to leave the EU in the upcoming referendum, London.
by Daily Sabah with Wires Jun 24, 2016 12:00 am

Britain decided to leave the EU in the historic Brexit vote and PM Cameron announced he will step down. While other politicians said this should be taken as a 'warning signal' for the EU, far-right parties across the continent rushed to suggest membership referendums

Britain voted to break away from the European Union on Friday, toppling Prime Minister David Cameron and dealing a thunderous blow to the 60-year-old bloc, one that sent world markets plummeting on Friday. Cameron announced he would step down to make way for a new leader by early October after voters opted to exit the 28-nation alliance in defiance of his predictions of economic disaster and isolation. Britons, many of them worried about immigration, decided 52 percent to 48 percent in favor of quitting the bloc by a margin of more than 1 million votes, according to the final results from Thursday's referendum. "The British people have voted to leave the European Union, and their will must be respected," Cameron said, as the shockwave of their decision sent the sterling back against the dollar, while global stocks and oil plummeted. Britain will be the first country in the history of the EU to leave, the culmination of decades of suspicion over European aims of creating an ever-closer political union. The result – after a deeply polarizing and often vitriolic campaign – also threatens the very unity of the United Kingdom, with Scotland unwilling to follow the rest of the country out of the EU. The Conservative prime minister promised to try to "steady the ship" over the next few months, but said a new leader should be installed by early October. 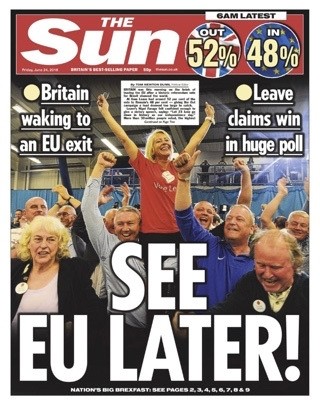 "I do not think it would be right for me to try to be the captain that steers our country to its next destination," he said outside his official Downing Street residence in London.

The bookmakers' favorite to replace him is former London mayor Boris Johnson, a rival from within his ruling Conservative Party who was the figurehead for the "Leave" camp. "Let June 23 go down in our history as our independence day," said top anti-EU campaigner Nigel Farage, leader of the U.K. Independence Party, who had promised Britons the chance to retake power from Brussels and rein in high immigration.

"We've done it! We've won!" shouted anti-EU campaigners during festivities in an office block in Westminster, popping open champagne bottles as the referendum results came in. "Out! Out! Out!" they chanted as dawn broke.

Immigration and an erosion of financial security have become rallying cries for populists across Europe, just as they have for Donald Trump's campaign in the U.S. presidential election. Trump hailed the British vote as he arrived in Scotland to unveil a refurbishment of his Trump Turnberry golf course, shortly after the results became clear. "I think it's a great thing. I think it's a fantastic thing," he told reporters.

The result of the vote caused the pound to fall 10 percent to touch a 31-year low of $1.3229. European stock markets dropped around 8 percent at the opening bell. British banking shares lost a quarter of their value in morning trade.

Voters appeared to have to shrugged off warnings that a Brexit would create a budget hole requiring spending cuts and tax increases, once they lose unfettered trade access to the EU.

The referendum means the world's fifth-largest economy must now go it alone in the global economy, launching lengthy exit negotiations with the bloc and brokering new deals with all the countries it now trades with under the EU's umbrella.

European Commission chief Jean-Claude Juncker has warned that the EU will "not be bending over backwards" to help Britain in those negotiations. Analysts say it could take the island nation a decade to secure new trade accords.

In a worst-case scenario, the International Monetary Fund has warned that the British economy could sink into recession next year, and overall economic output would be 5.6 percent lower than otherwise forecast by 2019, with unemployment rising back above six percent.

Thousands of jobs in the City, London's financial hub, could be transferred to Frankfurt or Paris, top companies have warned. The Brexit camp has argued that the business world will adapt quickly, with Britain's flexible and dynamic economy buoyed by new economic partners and selective immigration.

The campaign has left Britain riven in two, marked by the brutal murder of pro-"Remain" British lawmaker Jo Cox, a mother of two who was stabbed, shot and left bleeding to death on the pavement a week ahead of the vote.

Two years after Scotland voted in a referendum to remain in the U.K. First Minister Nicola Sturgeon has said a new independence vote is "definitely on the table" after Britain voted against the majority will expressed by Scots. "Scotland sees its future as part of the EU," Sturgeon told television news after the vote.

Northern Ireland, which is part of the U.K., is now faced with the prospect of customs barriers for trade with EU-member, the Republic of Ireland. Irish republicans Sinn Fein called for a vote on Irish unity following the referendum.

Leaders of the European Union, a bloc born out of a determination to forge lasting peace after two world wars, will open a two-day summit on Tuesday to grapple with the British decision.

The leaders said Britain will remain a member of the bloc until its exit negotiations are concluded, which probably means at least two years longer. The leaders of the EU's institutions said Friday that "until this process of negotiations is over, the United Kingdom remains a member of the European Union, with all the rights and obligations that derive from this."

They said in a statement that under the bloc's treaties "EU law continues to apply to the full in the United Kingdom until it is no longer a member."