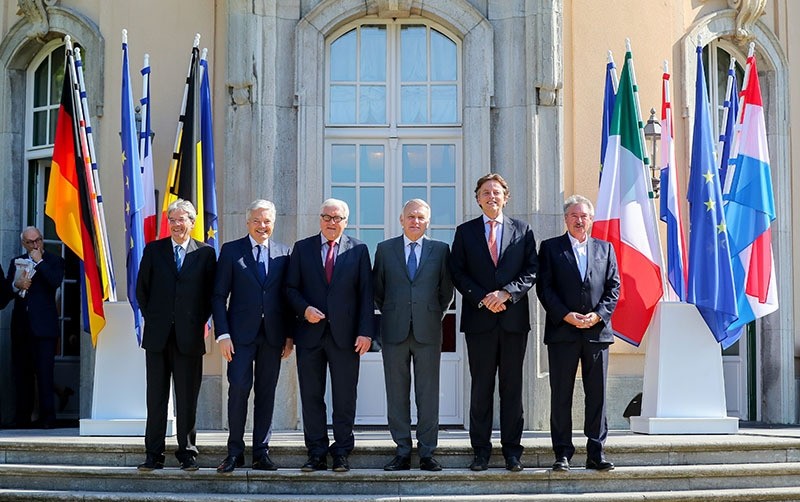 Representatives of the EU's six founding member states gathered in Berlin Saturday for talks on the future of the union following the U.K.'s vote to leave the bloc.

The foreign ministers urged for quick negotiations to avoid prolonged financial and political insecurity for the continent.

"There is a certain urgency ... so that we don't have a period of uncertainty, with financial consequences, political consequences," French Foreign Minister Jean-Marc Ayrault said.

He spoke alongside counterparts from the other five founding members of what has become the EU — Germany, Italy, the Netherlands, Belgium and Luxembourg. They all spoke of the need for a speedy renegotiation.

German Foreign Minister Frank-Walter Steinmeier expressed deep regret over the outcome of the British referendum, but said EU member states would address the challenge and work towards further strengthening the union.

Luxembourg's Foreign Minister Jean Asselborn said he hoped there would be no "cat and mouse" game now and that Britain would invoke Article 50 of the EU charter, which allows for a country to leave.

"There must be clarity," Asselborn told reporters. "The people have spoken and we need to implement this decision."

He added that once outside the bloc, Britain would be a "third country" — the EU term for non-members — in terms of trade agreements but emphasized that was "not meant negatively."

In remarks made to reporters ahead of talks among the foreign ministers of EU's six founding states, Germany, France, Italy, Belgium, the Netherlands and Luxembourg, Steinmeier said: "Now it is of prime importance that we will listen to each other, to understand the expectations, sensitivities of the European governments, and also listen to our societies to understand their expectations."

He identified the "refugee crisis", "security issues" and "unemployment" as three important topics that should be focused on by European governments after the Brexit result, to address the concerns and expectation of European citizens.

U.K. citizens voted to leave the EU in a historic referendum Thursday, where almost 52 percent of voters rejected their country's 43-year EU membership. The referendum sparked worries across European capitals for a domino-effect in other members.

Steinmeier emphasized it was not the time for anxiety in Europe, but for working to find answers to many unanswered questions.

"We are now in such a situation that does not allow either shock or hysteria,' he said.

He underlined the importance of the EU as an important peace and stability project, which had made significant contributions to the well-being and success of its member states for more than 50 years.

"I am sure that our member states can send a common message: We will not let Europe be taken away from us," he said.

Germany's invitation to only six EU member states for crisis talks in Berlin also led to some criticism, which Steinmeier dismissed. He said the foreign ministers of 28 member states already had their first discussions on Brexit Friday in Luxembourg.

"We will continue to have various other talks in the coming days," he added.