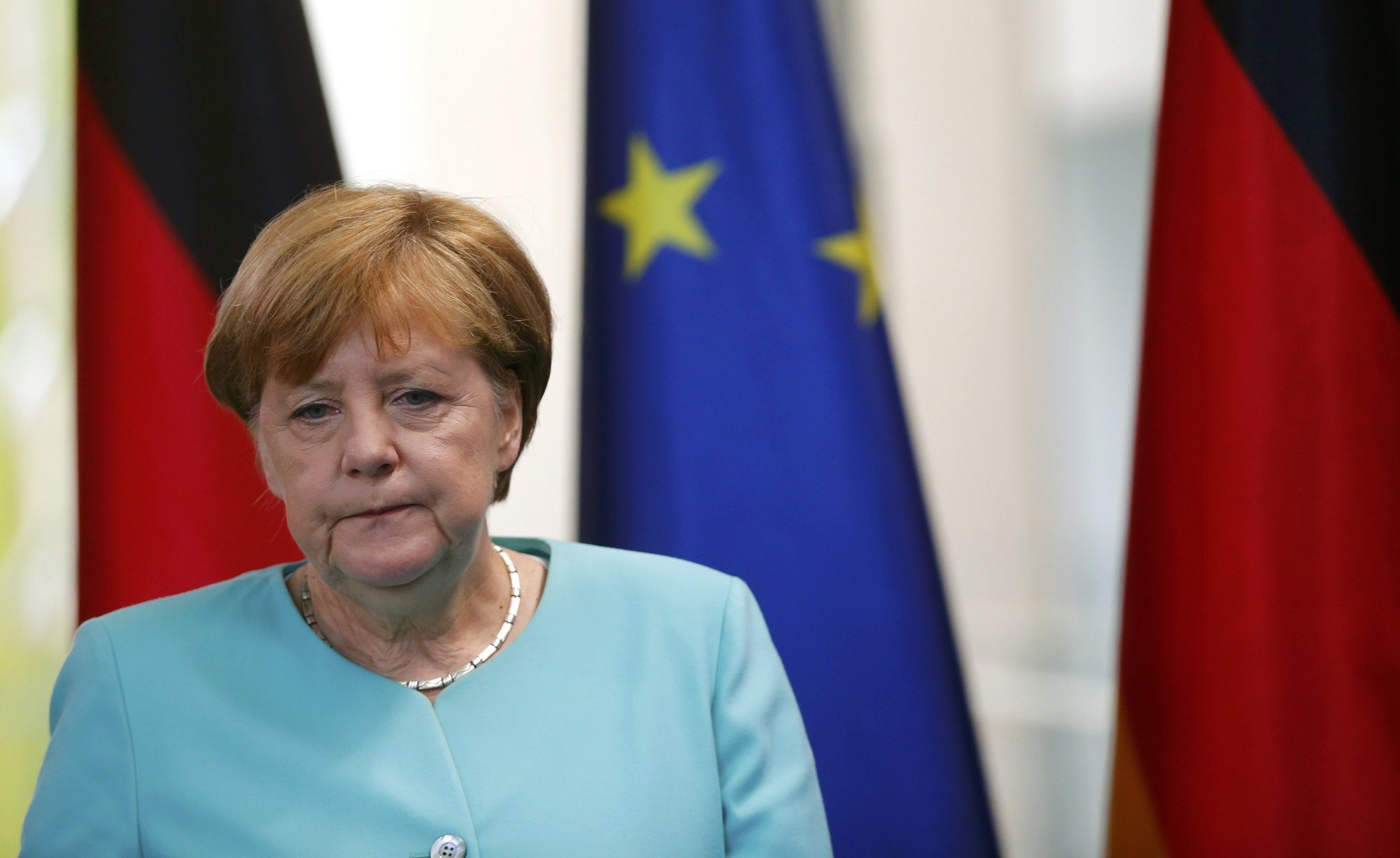 German Chancellor Angela Merkel arrives for a statement in Berlin, Germany, June 24, 2016, after Britain voted to leave the European Union in the EU BREXIT referendum. (REUTERS Photo)
by Jun 25, 2016 12:00 am

German Chancellor Angela Merkel sought on Saturday to temper pressure from Paris, Brussels and her own government to force Britain into negotiating a quick divorce from the EU, despite warnings that hesitation will let populism take hold.

Eurosceptics in other member states applauded Britons' decision to leave the European Union in a referendum that sent shockwaves around the world, with far-right demands for a similar vote in Slovakia underlining the risk of a domino effect.

With the referendum decision finally made on Thursday and Prime Minister David Cameron having announced his resignation, European politicians and institutions felt free to shower demands on Britain over its future outside the world's largest trading bloc.

The European Central Bank said Britain's financial industry, which employs 2.2 million people, would lose the right to serve clients in the EU unless the country signed up to its single market - anathema to "leave" campaigners who are set to lead the next government in London.

Almost alone in continental Europe, Merkel tried to slow the rush to get Britain out of the EU door. Europe's most powerful leader made clear she would not press Cameron after he indicated Britain would not seek formal exit negotiations until October at least.

"Quite honestly, it should not take ages, that is true, but I would not fight now for a short time frame," Merkel told a news conference.

"The negotiations must take place in a businesslike, good climate," she said. "Britain will remain a close partner, with which we are linked economically."

Britain's decision to leave the EU is the biggest blow since World War Two to the European project of forging greater unity. But Merkel appeared more conciliatory than others within her coalition government and elsewhere in Europe.

The chief executive of Britain's "Vote Leave" campaign called for informal talks before London notifies the EU it wants to leave under the Lisbon Treaty, which provides for two years of divorce proceedings.

"This process should get underway as soon as possible so that we are not left in limbo but rather can concentrate on the future of Europe," he said after hosting a meeting of his colleagues from the six founding members of the EU - Germany, France, Italy, the Netherlands, Belgium and Luxembourg.

French Foreign Minister Jean-Marc Ayrault warned of the dangers of delay. "We have to give a new sense to Europe, otherwise populism will fill the gap," he said.

They followed European Commission President Jean-Claude Juncker, who said on Friday it didn't make any sense to wait until October to negotiate the terms of a "Brexit".

Britain's representative on the EU executive, Financial Services Commissioner Jonathan Hill, resigned on Saturday after campaigning against a British exit.

In Britain itself, divisions widened after the relatively close vote.

Almost 1.9 million Britons have signed a petition on parliament's website calling for a second EU referendum because Thursday's 52-48 percent result in favor of "Brexit" was not decisive enough.

The petition will have to be discussed by lawmakers, but it has no legal force and its backers compare with the 17.4 million Britons who voted "leave".

Tens of thousands are also set to pack into Trafalgar Square in the British capital on Tuesday to show "London stands with Europe", the Evening Standard newspaper reported.

In contrast to Cameron, Scotland's pro-EU first minister said she wanted to open negotiations directly with Brussels. The option of a second referendum on independence from the United Kingdom - after Scots rejected the idea two years ago - should be "on the table", she said.

South of the border in England, eurosceptic newspapers rejoiced but others pondered an uncertain future. "So what the hell happens now?" asked the Daily Mirror.

Cameron announced on Friday he would resign after the referendum that sent global stock markets plunging, and inflicted the biggest one day drop on sterling in history.

He promised to stay on as a caretaker until October while the Conservative Party chooses a new leader.

Even before the British vote, anti-establishment parties were on the rise across the EU, not least in France where far-right National Front leader Marine Le Pen is expected to perform strongly in a presidential election next year.

Raising mainstream fears that other member states might be tempted to follow the British example, Slovakia's far right People's Party on Saturday launched a petition for a referendum on the country's future in the EU.

"Citizens of Great Britain have decided to refuse the diktat from Brussels. It is high time for Slovakia to leave the sinking European 'Titanic' as well," the party said.

The British pound fell as much as 10 percent against the U.S. dollar on Friday to levels last seen in 1985 on fears the decision could hit investment, threaten London's role as a global financial capital, and cause months of political uncertainty.

Ratings agency Moody's downgraded its outlook for Britain, saying its creditworthiness was now at greater risk.

Villeroy delivered a warning over the City of London financial center which handles trillions of euros of business even though it lies outside the ECB's jurisdiction.

That was at risk, including the "passport" arrangement under Europe's single market rules which allow London banks to do business with clients in the euro zone, even though Britain never joined the common currency.

"If tomorrow Britain is not part of the single market, the City cannot keep this European passport, and clearing houses cannot be located in London either," he told France Inter radio. The only way around this was for Britain to follow Norway, which lies outside the EU but has joined the single market.

This means signing up to the rules, including the free movement of workers - likely to be opposed in Britain where the "leave" camp promised to control immigration from the EU.

Cameron's replacement could be his Conservative rival Boris Johnson, the former London mayor who became the most recognizable face of the Leave camp.

There was euphoria over the vote in much of the British press. "Birth of a new Britain," the Daily Telegraph said, while the Daily Star tabloid borrowed from Donald Trump's campaigning message with its headline "Now Let's Make Britain Great Again".

But those among the more than 16 million who voted to stay in the EU also raised their voices.

The United Kingdom itself could also now break apart. Scottish First Minister Nicola Sturgeon said her devolved government was preparing to present legislation allowing a second independence referendum while continuing discussions on its place within the EU.

Scots rejected independence in 2014. But they voted to stay in the EU on Thursday, raising the possibility that they would be forced out against their will.

In 2014, Nationalists said Scotland would prosper on revenues from North Sea oil, but since then prices have collapsed, raising questions over the economic viability of an independent Scotland.