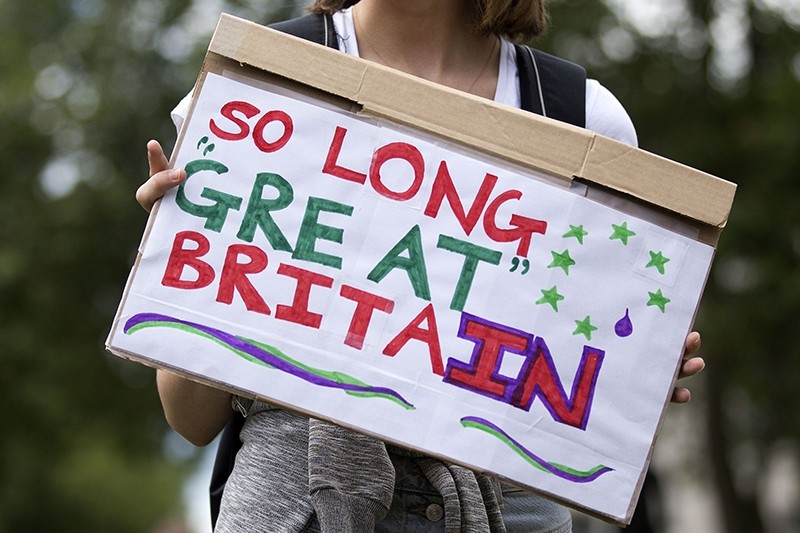 A demonstrator holds a placard that reads ,So Long Great Britain, during a protest against the pro-Brexit outcome of the UK's June 23 referendum on the European Union (EU), in central London on June 25, 2016. (AFP Photo)
by French Press Agency - AFP Jun 25, 2016 12:00 am

Londoners mobilised on social media Saturday to back a campaign to go from Brexit to 'Lexit', calling for their city to divorce from Britain and "move in with our friends" in the European Union.

While largely a symbolic protest, it is fuelled by real anger following Thursday's dramatic vote to quit the EU, which was acutely felt in the national capital, where a majority voted for Britain to remain in the EU, contrary to the prevailing mood in the country.

More than 130,000 people signed up to a petition to London Mayor Sadiq Khan calling on him to "Declare London independent from the UK and apply to join the EU".

"London is an international city, and we want to remain at the heart of Europe," it says.

"Let's face it -- the rest of the country disagrees.

"Let's make the divorce official and move in with our friends on the continent."

The petition was started by freelance writer James O'Malley, who expected only a few hundred signatures.

"I'm a big fan of the EU -- the values, the utopian ideas underpinning the EU. I don't want to see London leave."

Despite the jokey origins, he said the idea was not unthinkable.

"A few years ago we would have said leaving the EU is impossible," he said.

"I'm hoping now, given this gigantic reaction, to turn it into something meaningful. For example, could we use it to campaign for greater devolution for London?"

The idea of London becoming a city-state like Singapore is circulating online.

Khan has dismissed the idea but insisted that the capital's voice must be heard in Britain's EU exit negotiations, chiefly that the UK should retain access to the European single market.

The London Evening Standard newspaper said in its editorial Friday that the vote reflected the city's interests.

"The capital's economy, depending so much on the financial sector, which in turn depends so much on our privileged EU access as well as our global reach, made it inevitable that London would see the referendum differently," it said.

The results of Thursday's referendum make the capital-country division clear.

Among the UK's major cities, London was not alone in having a majority of voters who wanted Britain to stay in the EU.

On the other hand, Londoners were amongst the most apathetic about voting. Of the 12 regions, turnout in London was the fourth lowest at 69.7 percent.

But the shockwaves were reverberating around the city nonetheless.

"I never felt less British and more Londoner," Remain voter Julius Beltrame, 39, who works in the software sector, told AFP in The Lexington, a north London pub, in the early hours of Friday as the results were coming in.

Beverley David, a 33-year-old headhunter also in The Lexington, added: "People in London have a different identity. We are Londoners first, then European, then British."

The restiveness was also evident when former London mayor Boris Johnson, who spearheaded the Leave campaign, left his home Friday.

Police had to hold back an angry mob who booed him and yelled "traitor", "you're a parasite" and "shame on you".

Most Londoners identify as having roots beyond Britain.

"London is a cosmopolitan city which cannot be compared to the rest of the UK," said Carmen Martinez, 43, a Spanish civil servant who is retraining to become a teacher.

"Here you do not feel marginalised. In the rest of the country they do not want immigrants."