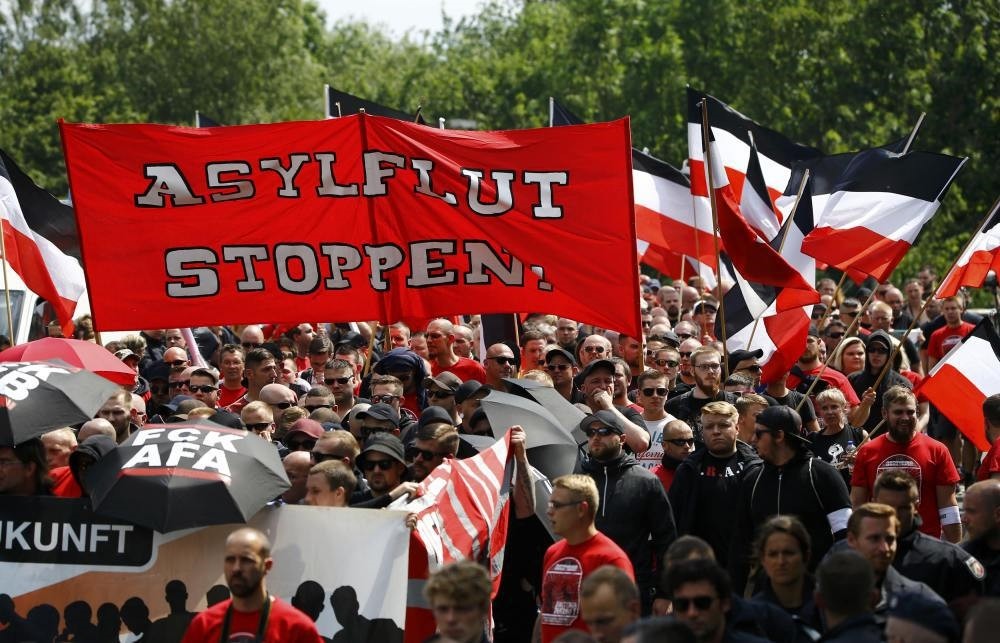 Far-right supporters hold up a banner reading: ,Stop the flood of asylum seekers, during a demonstration march in Dortmund, Germany, June 4.
by Daily Sabah with AP Jul 01, 2016 12:00 am

Following the Brexit, anti-EU sentiment has been more visible in Europe and far-right populist parties have demanded a similar referendum in their own countries. Support for populist parties has already been surging, especially over fears of further refugee influxes

Disenchantment with the European Union is not limited to British voters who opted to leave the bloc.

Across the continent, anti-EU sentiment is bubbling up, fueled by far-right movements and others unhappy about government spending cuts, the influx of migrants and other policies overseen from the 28-nation bloc's headquarters in Brussels.

Some political parties are offering to fight the cause of those disgruntled voters in upcoming national elections — while a few far-right groups are demanding a ballot in their own countries on whether to follow the United Kingdom out of the EU door.

That prospect is sending a shudder through top EU officials because it could propel a process where the bloc breaks up or collapses as fast as an Arctic ice sheet, wrecking Europe's delicate postwar balance. "Will Britain's shock vote to leave the (EU) embolden populists elsewhere in Europe? That has become the key question for Europe," Holger Schmieding, the chief economist at German bank Berenberg, wrote in an analysis.

France's far-right National Front lost no time in claiming that the U.K. referendum outcome was an emphatic endorsement for the proposals it has been putting forward for years. The nationalist party's leader, Marine Le Pen, posted a Union Jack photo on her Facebook page when the result came out last week, saying, "The United Kingdom has started a movement that will not stop."

Le Pen predicts that Europe's future shape will now be a central issue in campaigning for the French presidential election in about a year's time. Numerous polls have shown her reaching a runoff against a mainstream candidate.

The British decision to leave was also met with joy by Dutch firebrand lawmaker Geert Wilders, whose anti-Islam and Eurosceptic Freedom Party is riding high in polls ahead of a general election next year. "We want to be in charge of our own country, our own money, our own borders, and our own immigration policy," Wilders said, pledging to hold a referendum on EU membership if he takes power.

Earlier this month, an anti-establishment party founded by a comic triumphed in Italian mayoral runoff elections, upending the established order of municipal politics in Rome and Turin. The 5-Star Movement candidates trounced Italian Premier Matteo Renzi's mainstream rivals. "We want a Europe that is more a 'community' and not a union of banks and lobbies," the 5-Star Movement's founder, comic Beppe Grillo, wrote on his blog after the British vote.

"The European Union must change, otherwise it dies," he wrote. "There are millions and millions of European citizens ever more critical, who don't recognize themselves in this union, made of banks and economic blackmail."

EU nations such as Hungary, Poland, the Czech Republic and others have also defied EU officials in Brussels by refusing to accept the principle of sharing the refugee load among all EU members and helping hard-hit Greece and Italy.

Even in Germany, a bedrock EU member, there are stirrings of dissent against the bloc. Although Chancellor Angela Merkel's conservative bloc is easily the strongest political force, its ratings have sagged over recent months amid the huge surge of migrants to Germany and the fierce debate about how to respond.

At the same time, the three-year-old nationalist party Alternative for Germany (AfD) has surged in the polls and hopes to enter the national parliament next year. It opposes the EU becoming a "centralist federal state" and demands that the EU go back to being a community of "sovereign, loosely connected individual states."

And even the wealthy countries of Northern Europe have not been immune from the anti-EU malaise, with the U.K. referendum result encouraging Eurosceptic parties there as well.

The nationalist Sweden Democrats reiterated their calls for a similar anti-EU referendum in Sweden, while the leader of the anti-immigrant Danish People's Party, Kristian Thulesen Dahl, said Denmark should wait to see what kind of exit deal Britain gets and then hold its own referendum.

Britain's impending departure from the EU — which is apparently is going to be a much longer process than EU officials want — has not triggered a groundswell of other countries eager to follow suit.

After the Brexit, fears of a rise of Euroscepticism and anti-establishment parties in Europe have deepened. Support for far-right populist parties across Europe has already been surging especially over fears of a refugee influx fleeing violence and persecution in the Middle East and Africa. French far-right National Front leader Marine Le Pen called for a "Frexit" shortly after the results of Britain's membership referendum were announced. Similarly, Geert Wilders, the leader of the Dutch, anti-Islam, far-right Freedom Party (PVV), called for a "Nexit" and other politicians in Austria, Sweden, Finland, Denmark have also floated similar ideas to leave the EU.
RELATED TOPICS