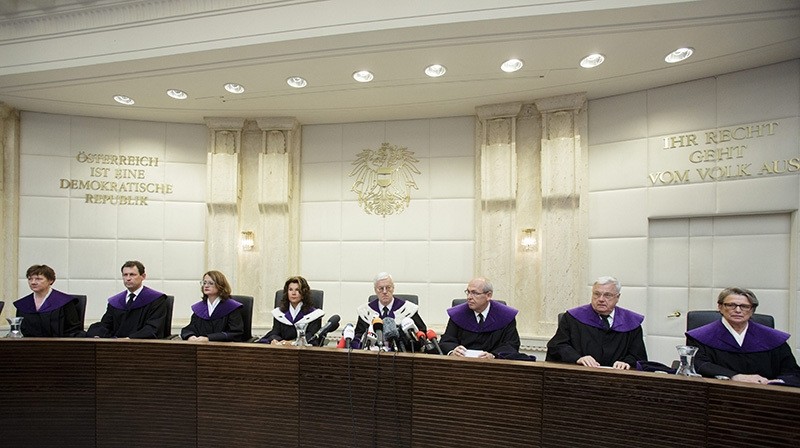 President of the Austrian Constitutional Court (VFGH) Gerhart Holzinger (5-L), Vice President Brigitte Bierlein (4-L) and Court members arrive ahead of the announcement of the verdict on result of Austrian Presidential election (EPA Photo)
by Jul 01, 2016 12:00 am

Austria's presidential election will have to be repeated because nearly 78,000 ballots were handled improperly, the Constitutional Court ruled Friday, in a decision that handed a second chance to far-right candidate Norbert Hofer.

Senior Freedom Party parliamentarian Hofer had narrowly lost the run-off election in May to Green contender Alexander Van der Bellen by a margin of only 31,000 ballots.

"Even though we live in a stable democracy, thank God, the meticulous application of voting procedures guarantees the confidence of citizens in correct elections and democracy as a whole," said the court's president, Gerhart Holzinger.

This is the first time that a national election has to be repeated in Austria.

The Freedom Party had challenged the election, alleging that ballots from citizens who had voted outside their home town or who had sent in postal votes had been handled incorrectly in the vast majority of voting districts.

The court found that this was the case in 14 voting districts and affected some 78,000 absentee ballots, even if it saw no evidence for election fraud.

"There is no need for proof of actual tampering," Holzinger said.

The court has the duty to order a rerun even if there was only the possibility for fraud, he explained.

In addition, the court ruled illegal the Interior Ministry's long-standing practice of sending embargoed local ballot results to media and polling institutes before all polling stations have closed.

This was the second reason why the election would have to be repeated, Holzinger said.

The new run-off election between Van der Bellen and Hofer will likely take place in late September or early October, the Interior Ministry has said.

The court's verdict comes one week before Social Democratic President Heinz Fischer will end his second term in office.

As there is no successor, parliament's presidential committee will take over Fischer's job temporarily. Hofer is a deputy president of parliament and is therefore part of this committee.