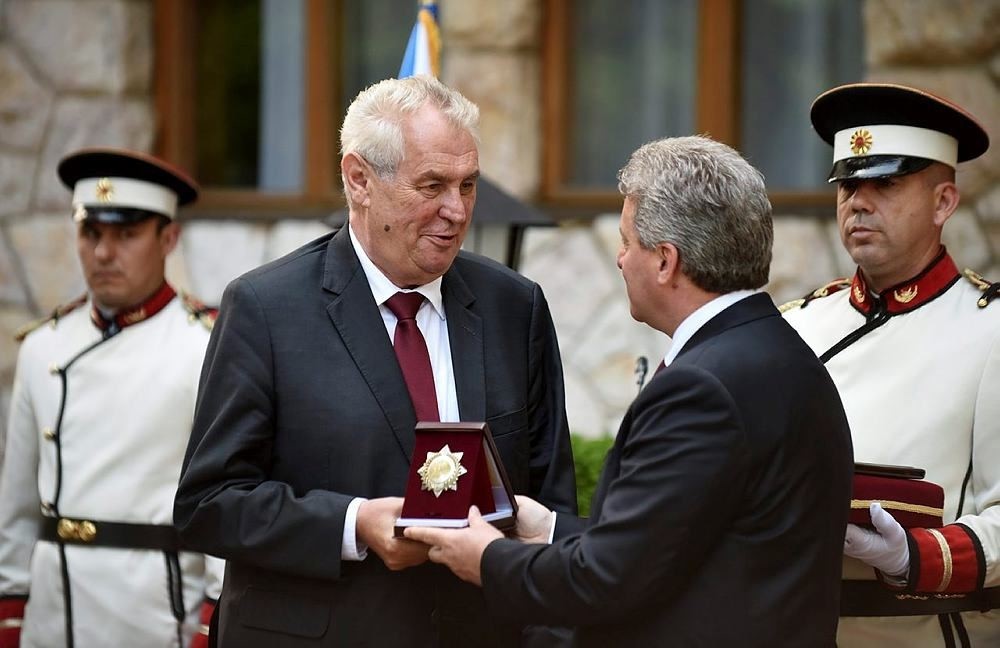 Macedonian President George Ivanov (2-R) awarded the president of the Czech RepublicMilos Zeman (2-L) with the 'September 8' award in Ohrid, The Former Yugoslav Republic of Macedonia, 09 June 2016. (EPA Photo)
by reuters
Jul 01, 2016 12:00 am
Czech President Milos Zeman called for the Czech Republic to hold a referendum on European Union and NATO membership following Britain's shock vote to leave the EU, a suggestion quickly rebuffed by the government.

Zeman said on Thursday he would back his country staying in the EU and NATO. He has no power to call a referendum but is an influential leader in a country where euroscepticism is widespread. The Czech Republic joined the bloc in 2004.

"I disagree with those who are for leaving the European Union," Czech Radio quoted Zeman as saying at a meeting with citizens in the eastern town of Velke Mezirici late on Thursday.

"But I will do everything for them to have a referendum and be able to express themselves. And the same goes for a NATO exit too," the centre-left president said.

Britain's 52 to 48 percent vote on June 23 in favour of quitting the EU has emboldened eurosceptic groups across Europe and raised concern other member states may consider leaving.

The Czech government responded swiftly to Zeman's suggestion. "Membership in these organisations is a guarantee of stability and security," Prime Minister Bohuslav Sobotka's spokesman said in a statement.

"The government is not considering taking any steps which would question in any way our membership and the long-term orientation of the Czech Republic's foreign policy. Therefore it does not envisage any referendum."

Andrej Babis, leader of the ANO party that rules with Sobotka's Social Democrats in the centre-left cabinet, said a referendum would be damaging, according to news website Novinky.cz.

Jose Manuel Garcia-Margallo, the acting foreign minister for Spain, which wants to prevent the autonomous region of Catalonia from breaking away, also called Zeman's referendum suggestion "a very bad idea".

A referendum would require a constitutional amendment stipulating that the winning side must have a minimum 60 percent of the vote in both houses of parliament, a margin highly unlikely in the current parliament.

Czech satisfaction with EU membership fell to 25 percent in an April survey by the CVVM institute, down from 32 percent the year before.

In neighbouring Slovakia, the far-right People's Party launched a petition on Friday to hold referendums on EU and NATO membership.

The chief of staff to Hungarian Prime Minister Viktor Orban said on Thursday he would vote to leave the EU or would abstain if a referendum were held, but added there were no plans for a vote.

The EU's handling of a migrant crisis over the past year has angered many in formerly communist eastern Europe, where some governments reject migrant quotas proposed by the European Commission.

As president he has been a vocal opponent of taking in migrants, most of whom are Muslim and have fled conflicts or poverty in the Middle East, Afghanistan and Africa.

He has also stirred concern in some Western capitals for holding views sympathetic to Russia in the Ukraine conflict, although the Prague government, which runs foreign policy, has strictly upheld the EU policy of sanctions against Moscow.
Last Update: Jul 01, 2016 7:18 pm