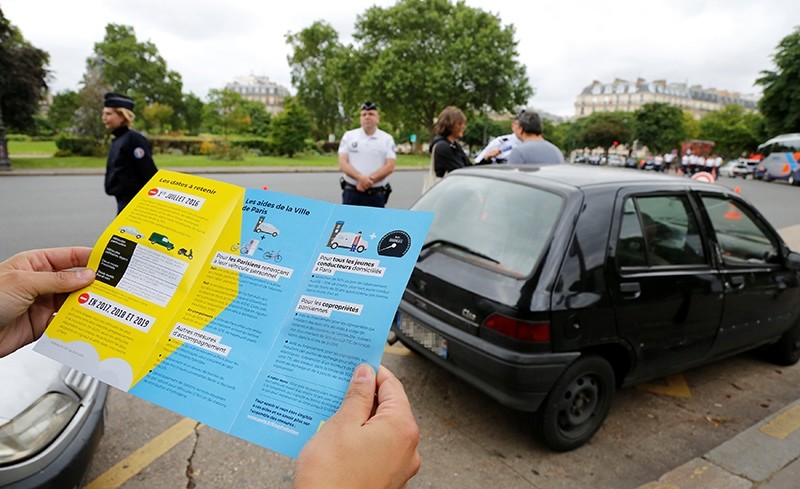 A man holds a leaflets as French police speaks to a driver with a car older than 20 years to explain a new law to fight air pollution at the Place de la Nation square in Paris, France, July 1, 2016 (Reuters Photo)
by Compiled from Wire Services Jul 02, 2016 12:00 am

The French capital cracked down Friday on polluting old cars, with vehicles registered before 1997 no longer allowed roam the streets of Paris from 8 am to 8 pm during weekdays.

Some owners protested by parking their vehicles near the National Assembly and Champs Elysees avenue to denounce a ban they say will hurt poor people most and slash the resale value of their vehicles.

"I drive 50 km per week, I don't have the means to change vans so I will continue using it, I'll get fined every week and there you go," said Marc Martin, who uses his ageing Peugeot van to deliver picture frames to clients.

"And if it goes too far, I'll close my business, people will lose their jobs, that's it. What can I say, not much. This law is pathetic."

Paris Mayor Anne Hidalgo says the ban could be extended in 2020 to all combustion-engine cars more than nine years old.

Cars older than 10 years are estimated to cause half of the city's air pollution.

A ban on thin plastic bags at checkout counters also went into force on Friday.

After an initial tolerance period, motorists who flout the ban face fines of 35 euros ($39), an amount that is set to jump from the end of the year.

Upwards of half-a-million owners in and around Paris will be hit by the ban, according to a driver defence group, 40 million d'Automobilistes, which is taking legal action to seek financial compensation for drops in the value of now-banned vehicles.

Norway is planning to ban petrol- and diesel-fuelled cars from 2025 and several cities in Europe are testing various anti-pollution or anti-congestion measures based on tolls for city centre access or temporary and selective car bans during surges in pollution levels.