Leadsom, the top pro-Brexit candidate for PM, says UK could leave EU by next year 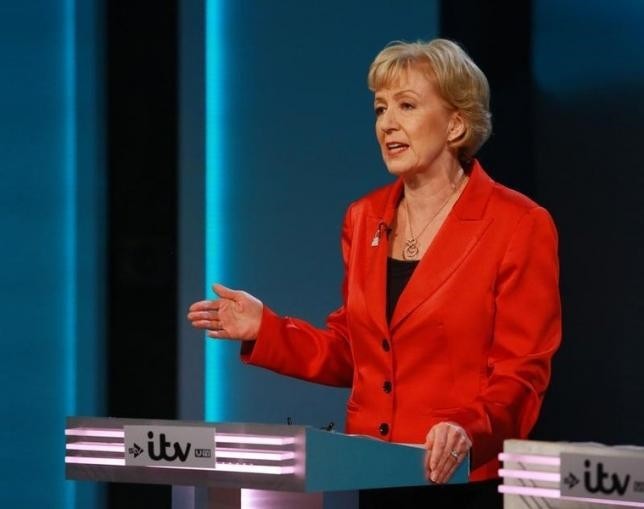 Energy Minister Andrea Leadsom speaks during the ''The ITV Referendum Debate'' at the London Television Centre in Britain, June 9, 2016. (REUTERS Photo)
by Compiled from Wire Services Jul 03, 2016 12:00 am

The British leadership contender also said that Britain could pull out of the European Union by as early as next year following last week's referendum vote to leave the bloc.

In an interview with the Sunday Telegraph, Leadsom, 53, said only someone who had herself voted to leave the EU could be trusted to take the country out of Europe.

Bookmaker William Hill said she was now second-favorite to succeed Cameron, behind interior minister Theresa May, who supported the "Remain" campaign.

The referendum has also divided Britain, with Scotland, Northern Ireland and London voting against the majority of Britons to stay in the 28-nation club. Thousands of Londoners took to the streets on Saturday to protest against Brexit.

May has the support of far more Conservative lawmakers than her rivals but the 53-year-old Leadsom, a former Barclays banker, has now received backing from former Conservative Party leader Iain Duncan Smith.

Leadsom also featured heavily in Saturday's edition of the Daily Telegraph, a newspaper politically aligned with the right-wing Conservative party.

"I think it's very difficult for someone (to become prime minister) who doesn't agree with (leaving the EU), who is reluctantly following the wishes of the people," Leadsom told the Telegraph.

"I genuinely believe that if we want to make a go of it, then we need somebody who believes in it."

Leadsom is expected to announce her plan for the leadership on Monday.

Gove made his pitch for prime minister on Friday, but was scorned by colleagues for pulverizing the chances of early front-runner and fellow Brexit campaigner Boris Johnson, whom Gove described as unfit for office.

As of Friday, May had the backing of 96 Conservative MPs, the BBC said. Pensions minister Stephen Crabb had 22 backers, with Leadsom on 21, Gove on 18 and former defense minister Liam Fox on 10.

Conservative lawmakers will whittle down the field to two candidates before ordinary members of the party vote on the winner.

The opposition Labour party is in the midst of its own leadership drama, with leader Jeremy Corbyn refusing to step down after his own MPs passed a motion of no-confidence in his leadership.

Labour lawmakers are trying to broker a deal for Corbyn to step down in exchange for his successor pledging to retain some of his key policies on tackling inequality and making the party more democratic, the BBC reported.

Left-winger Corbyn, who is popular with the party's grass-roots membership, has said he will not betray the supporters who elected him.

Corbyn spoke at an anti-racism rally in London on Saturday but did not talk about his future.