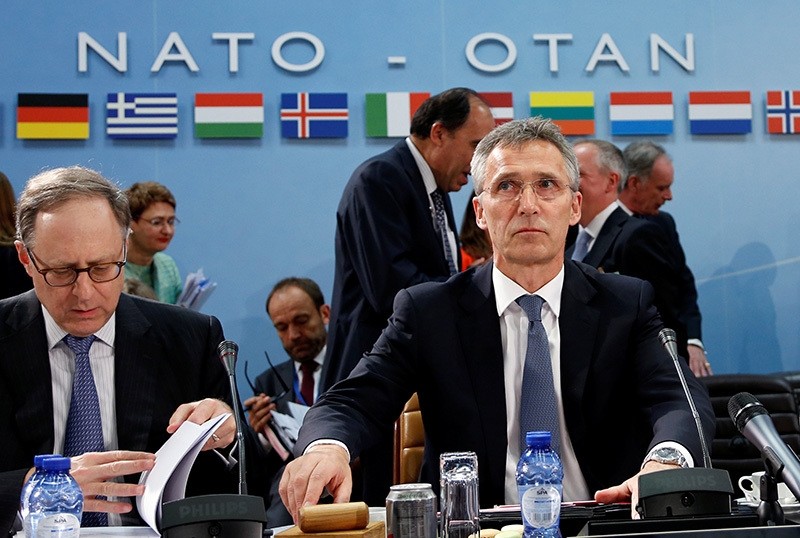 NATO would like to hold a new round of talks with Russia in the wake of its summit in Warsaw this week, which is expected to ratchet up tensions with Moscow.

NATO ambassadors last met their Russian counterpart in April, after a hiatus of almost two years. The Western military alliance had been keen to hold another meeting before its summit on Friday and Saturday, but Russia turned down the offer.

"The NATO-Russia Council has an important role to play as a forum for dialogue and information exchange, to reduce tensions and increase predictability," NATO Secretary General Jens Stoltenberg told journalists in Brussels on Monday.

"That is why we are talking with Russia to hold another meeting of the council shortly after the Warsaw summit," he added.

Stoltenberg said a "good dialogue" is under way with Moscow about the modalities, agenda and timing of the meeting.

Relations between NATO and Moscow have reached their worst point since the Cold War over Russia's actions in Ukraine. Both sides have been flexing their military muscles in Eastern Europe, accusing each other of sabre-rattling and provocations.

NATO leaders are headed to the front lines of an escalating crisis with Russia on Friday and Saturday for a summit in Poland that is expected to clear the way for more NATO troops in Eastern Europe.

At the Warsaw summit, leaders are expected to clear the way for four battalions of some 1,000 troops each to be deployed to Estonia, Latvia, Lithuania and Poland.

Moscow is also likely to be irritated by progress made on NATO's missile defense system in Europe.

NATO would like the Warsaw summit to mark the next step in the development of the system, by declaring its initial operating capability, Stoltenberg said.

Moscow believes that the system, which has been years in the making, could be used to shoot down Russian missiles. NATO argues this is technically impossible. The United States, which has taken the lead in the project, says the system is actually meant to counter Iran.

"This is not directed against Russia," Stoltenberg said.

Poland and the Baltic states of Lithuania, Latvia and Estonia - all occupied or controlled by the Soviets following World War II - have felt particularly threatened by Moscow's actions in Ukraine.

"Today, Russia constitutes the biggest threat to the security of the world," Polish Defense Minister Antoni Macierewicz said during a recent visit to Brussels, where NATO is headquartered.

Its "brutal violence and aggression" is comparable "only to the times of the Cold War," he added.

NATO has been at pains not to draw parallels with the four-decade-long stand-off between the Soviet Union and Western powers. The military alliance, which now has 28 member states, was created in 1949 partly to deter Soviet aggression.

"I don't believe we are in a Cold War," NATO Secretary General Jens Stoltenberg said last month. "But we see a more assertive Russia and we see a Russia which has invested heavily in military capabilities and which has been willing to use them against Ukraine."

In response, NATO has started implementing measures that it believes would discourage Russia from attacking its eastern flank.

The alliance has conducted more military exercises in the region and helped with air policing and naval operations. At this week's summit, NATO leaders are expected to clear the way for four battalions of some 1,000 troops each to be deployed to Estonia, Latvia, Lithuania and Poland.

Support for a brigade in Romania is also foreseen, while some Black Sea countries are pushing to have a stepped-up naval presence in that body of water, which borders Russia.

The moves come despite repeated warnings from Russia that an eastward NATO expansion threatens its national security.

Some European politicians are keen to contain the NATO-Russia tensions amid fears that they could trigger military incidents.

"What we shouldn't do now is further inflame the situation with loud sabre-rattling and war cries," German Foreign Minister Frank-Walter Steinmeier said in an interview last month with the tabloid Bild.

"Whoever believes symbolic tank parades on the eastern borders of the alliance will achieve more security is mistaken," he added.

Germany has been pushing for NATO to rekindle dialogue with Russia. Ambassadors from the alliance and Moscow conducted talks in April after a hiatus of almost two years, but NATO's Stoltenberg said "profound and persistent disagreements" remained.

NATO had wanted another meeting before the Warsaw summit, but Moscow turned down the offer. Stoltenberg said Monday that the alliance now hopes for a meeting "shortly after" the summit.

While the situation in the east is expected to dominate the Warsaw talks, NATO has other matters on its plate. For example, instability in a variety of Middle Eastern countries has helped spawn the global threat of the Daesh terrorist group.

Alliance leaders are also expected to approve the deployment of NATO surveillance planes near Syria and a return of NATO military trainers to Iraq in support of a US-led coalition fighting Daesh.

NATO is also training security forces in Afghanistan, in a bid to prevent a terrorist resurgence there. The Warsaw summit should pave the way for a continuation of its Resolute Support training mission and NATO funding for Afghan security forces.

The leaders will also consider cooperation with the European Union on curbing migrant smuggling in the Mediterranean Sea and closer ties with neighboring countries such as Ukraine and Georgia.

The summit will additionally be used to remind NATO countries of their promise to boost defense spending. The alliance released new data Monday estimating that defense expenditures in Europe and Canada will grow by 3 per cent this year.

"But we have a very long way to go," Stoltenberg said. "The Warsaw summit will renew our commitment to spend more on defense and to spend better."