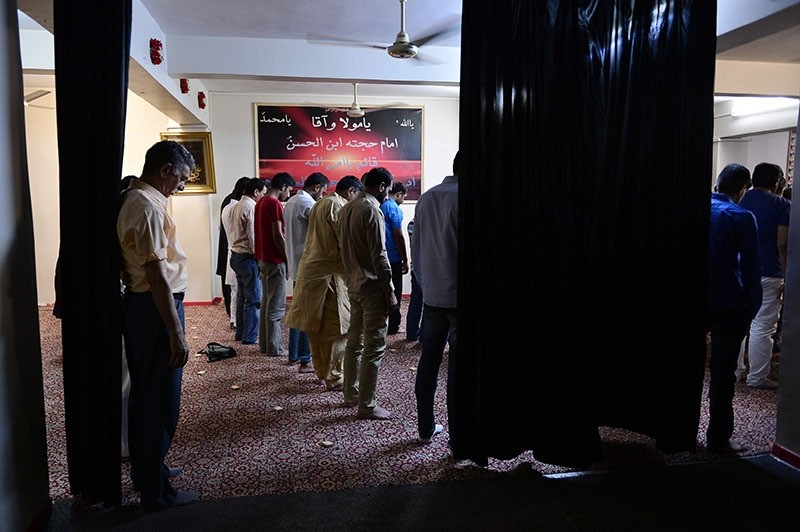 Muslim Shia migrants in Greece pray during the celebrations of Eid al-Fitr marking the end of the fasting month of Ramadan, at a makeshift mosque near the port of Piraeus on July 6, 2016. (AFP)
by Anadolu Agency
Jul 06, 2016 12:00 am

Thousands of Muslims in Athens, who still await the Greek government's unfulfilled promise of constructing a mosque for the minority community in the capital, held their Eid prayers at open grounds and stadiums on Wednesday.

Several people performed their special Eid prayers at the SEF and OAKA, two stadiums for which the Muslim community was granted special permission by the Greek government to mark the special occasion. While the Turkish minority in Greece's Western Thrace region and Turks in Athens held their Eid al-Fitr prayers Tuesday, thousands of other Muslims in Athens, including Pakistanis and Afghans offered their prayers Wednesday.

Muslims in Athens lamented the fact that the capital of a major European country still lacked a fully-functional mosque for its large minority capital. They regret being forced to perform their prayers in small halls and rooms used as informal "masjids". Several people just end up praying at open spaces such as pavements or parks in the capital.

There are two Ottoman era mosques in the Greek capital, one of which is now used as a museum, while the other remains under restoration. In 2006, the Greek parliament had approved a plan to build a mosque in Athens for the estimated over half a million Muslims in the country.

In June this year, Greek Prime Minister Alexis Tsipras yet again promised that a mosque and a Muslim cemetery would be built soon in Athens. Even human rights groups such as Amnesty International has criticized Athens for being the only European Union capital without a functioning mosque. However, according to George Kalantzis, secretary-general responsible for religious affairs, the ongoing political and economic instability in Greece along with red tape involving Greek bureaucracy and pending court cases were responsible for the delay in the construction of the mosque.

Kalantzis said Greece had been wracked by political instability for the last 10 years. He explained that the Greek ministries of education, finance, infrastructure and environment need to coordinate and cooperate to execute the mosque project. "[But] as you see, four ministers of four each ministries have been changed every two years," he said, pointing out the level of instability in Greece.

Some pending court cases also hamper the project. "I think that the court will give the ruling in the coming months," Kalantzis said. But while Greek officials continue to offer promises to build the much needed place of worship, Muslim community members are beginning to doubt their sincerity.

Ridvan Shargo, who has been living in Athens for the last 28 years, said: "It has been promised for a really long time but we see no developments. There are always excuses due to technical issues. Even in the time of Olympic games, they just dodged it...We really need a mosque here for our prayers and funerals."