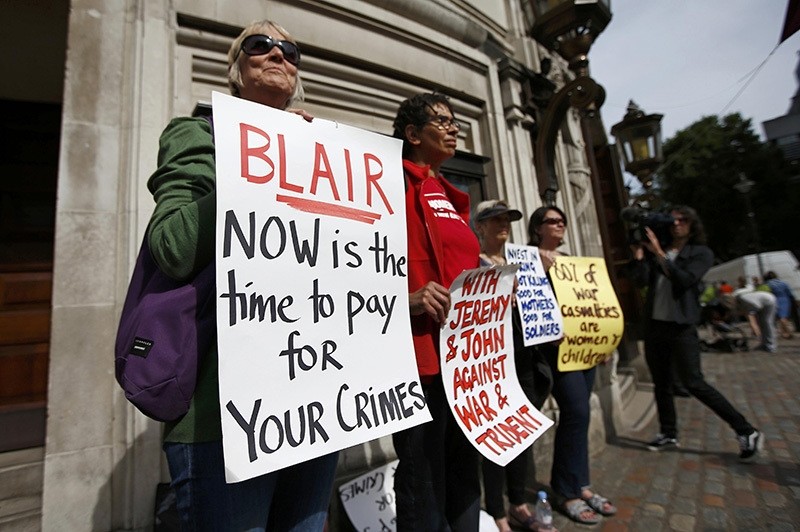 Demonstrators protest before the release of the John Chilcot report into the Iraq war, at the Queen Elizabeth II center in London, Britain July 6, 2016. (Reuters Photo)
by Compiled from Wire Services Jul 06, 2016 12:00 am

The head of Britain's Iraq War inquiry has released a damning verdict on a conflict he says was mounted on flawed intelligence, executed with "wholly inadequate" planning.

Retired civil servant John Chilcot says "the U.K. chose to join the invasion of Iraq before the peaceful options for disarmament had been exhausted. Military action at that time was not a last resort." 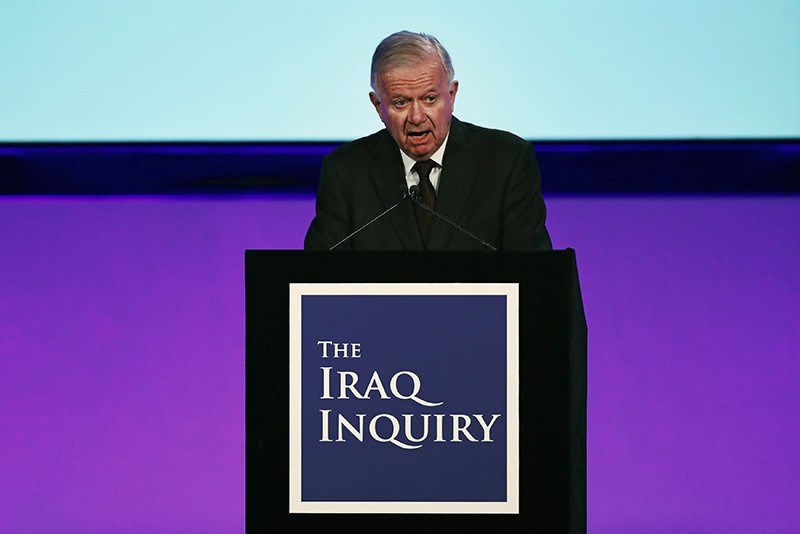 He says then-Prime Minister Tony Blair's government presented an assessment of the threat posed by Iraqi leader Saddam Hussein's weapons with "certainty that was not justified," and military planning for the war and its aftermath were not up to the task.

"It is now clear that policy on Iraq was made on the basis of flawed intelligence and assessments. They were not challenged and they should have been," the head of the inquiry, John Chilcot said in presenting its findings.

"The report should lay to rest allegations of bad faith, lies or deceit," Blair said in an initial response. "Whether people agree or disagree with my decision to take military action against Saddam Hussein; I took it in good faith and in what I believed to be the best interests of the country."

Blair noted that the Chilcot report did make real and material criticisms of the preparation and planning for the war. "I will respond in detail to them later this afternoon," he said in a statement. "I will take full responsibility for any mistakes without exception or excuse."

"I will express my profound regret at the loss of life, will pay tribute to our armed forces," he added.

Below are some of the report's key findings:

Chilcot said in his statement: "We have concluded that the circumstances in which it was decided that there was a legal basis for UK military action were far from satisfactory."

The report cited several shortcomings in the legal process, including:

- The legal advice produced by the government's top lawyer was presented to a cabinet meeting of senior ministers, but not discussed in detail:

"There was little appetite to question Lord Goldsmith (Attorney General) about his advice" that the invasion was legal, and "no substantive discussion of the legal issues was recorded", the report said.

-The report criticised the way Prime Minister Tony Blair presented intelligence information to the public: "The deliberate selection of a formulation which grounded the statement in what Mr Blair believed, rather than in the judgements which the JIC (Joint Intelligence Committee) had actually reached in its assessment of the intelligence, indicates a distinction between his beliefs and the JIC's actual judgements."

-The intelligence itself was also criticised: "At no stage was the proposition that Iraq might no longer have chemical, biological or nuclear weapons or programmes identified and examined by either the JIC or the policy community."

-The report said that Britain chose to join the invasion of Iraq before peaceful options for disarmament had been exhausted: "At the time of the parliamentary vote of 18 March, diplomatic options had not been exhausted. The point had not been reached where military action was the last resort."

Blair was warned about the threat of increased al Qaeda activity as a result of the invasion, the report said.
- "Mr Blair had been advised that an invasion of Iraq was expected to increase the threat to the UK and UK interests from Al Qaida and its affiliates."
- It cited Blair's response, made in a 2011 statement: "I took the view then and take the same view now that to have backed down because of the threat of terrorism would be completely wrong."

"The Iraq of 2009 certainly did not meet the UK's objectives as described in January 2003: it fell far short of strategic success. Although the borders of Iraq were the same as they had been in 2003, deep sectarian division threatened both stability and unity."

The report criticised the government's post-conflict planning for Iraq:
- "The information on Iraq available to the UK government before the invasion provided a clear indication of the potential scale of the post-conflict task."
- "When the invasion began, the UK Government was not in a position to conclude that satisfactory plans had been drawn up and preparations made to meet known post-conflict challenges and risks in Iraq and to mitigate the risk of strategic failure." 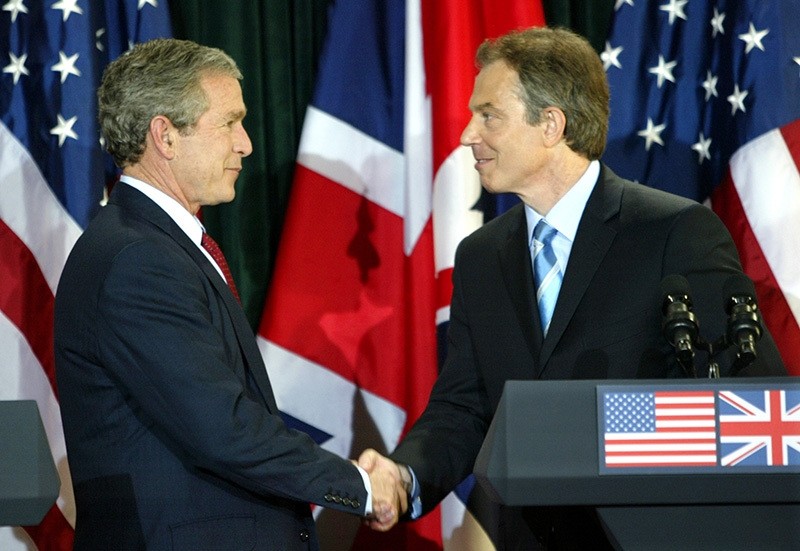 The report stated that Tony Blair had made it clear to then U.S. President George W. Bush eight months before the invasion that he will support the Bush without evaluating further evidence. "I will be with you, whatever" quoted the report from a confidential memo between Blair and Bush from July 2002.

It also accused Blair's government level of commitment to the issue prior to the invasion made it difficult for the U.K. authorities to reassess the evidence leading to the invasion and its risks.

It have been 2,578 days, or just over seven years, since the retired civil servant was announced as the head of an inquiry into Britain's involvement in the U.S.-led Iraq war. Most people agree it is the families of British servicemen and women killed in the Iraq war who have waited the longest.

The families, many of whom were in the Queen Elizabeth II Centre in central London listening to Chilcot disclose his findings, have been waiting for some measure of accountability since the invasion to topple Saddam Hussein's regime.

They are the relatives of 179 British soldiers who died in action between March 2003 and April 2009, when the last U.K. troops were withdrawn from Iraq. Nearly 50 were killed by roadside bombs after the initial combat mission. The number of Iraqi deaths over the same period is counted in tens of thousands.

The Chilcot report -- or, to use its official name, the Iraq Inquiry -- was announced shortly after the 2009 withdrawal by then Prime Minister Gordon Brown as an "objective and non-partisan" review of the conflict.

"The objective is to learn the lessons from the events surrounding the conflict," Brown told the House of Commons on June 15, 2009.

"The Iraq Inquiry will look at the run-up to conflict, the conflict itself and the reconstruction, so that we can learn lessons in each and every area."

Chilcot and his team would have access to all U.K. government papers and the ability to call any witnesses, Brown said.

What followed was one of the longest-lasting and -- at a cost of £10 million ($13 million) -- most expensive inquiries in British history. The final document is estimated to contain 2.6 million words and hard copies will come in 13 volumes, although it will also be made available online.

More than 150 witnesses were called to give evidence. Tony Blair, who led Britain into the war and whose career has come to be widely associated with it, was called twice.

Brown predicted the inquiry would take a year to complete.

The delay was partly caused by a bitter debate over the declassification of dozens of documents -- in particular, the correspondence between Blair and U.S. President George W. Bush.

Senior British civil servants argued that communication between the two leaders could not be published for national security reasons but it was eventually agreed it could be offered in a summarized form and not quoted directly.

Another reason was the decision to give those criticized in the report the right to reply and make comments before its completion.

Wednesday's report was commissioned to examine only the U.K.'s role in the war, so it will not contain an extensive assessment of the role of the U.S. and other countries in the invading coalition, such as Poland and Australia.

Blair and his foreign secretary, Jack Straw, are among the political leaders of the time expected to come under heavy criticism.

However, the Iraq war was launched on the pretext of intelligence that suggested the Saddam Hussein regime possessed weapons of mass destruction -- weapons that were never discovered.

That is why the Chilcot report is also expected to be tough on Richard Dearlove, the then chief of Britain's MI6 foreign intelligence service, and John Scarlett, who was head of Britain's Joint Intelligence Committee and ultimately responsible for directing the country's intelligence organizations.

There may also be criticism of the military for failing to provide troops with adequate equipment.

Many -- including dozens of victims' families -- are hoping the report will be an opportunity to lay the blame at the feet of the man they say was the architect of Britain's role in the war: Tony Blair.

One such hopeful is reported to be Jeremy Corbyn, Blair's successor as Labour Party leader.

The Sunday Times reported last weekend that Corbyn would use his parliamentary immunity to accuse Blair of war crimes.

The newspaper quoted an unnamed source as saying: "He's going to say that Blair's a full-on war criminal… Corbyn will say it in parliament and then he's planning to address anti-war rallies outside. He'll have to be careful because if he calls him a war criminal outside the chamber… Blair could set the lawyers on him and bankrupt him."

However, even before Chilcot started his work, Brown said the inquiry would not seek to assign blame, let alone any criminal responsibility for the war or acts committed during its execution.

He insisted in his 2009 announcement that "the primary objective of the committee will be to identify lessons learned."

Brown added: "The committee will not set out to apportion blame or consider issues of civil or criminal liability."

Chilcot will announce his findings at 11 a.m. local time (1000 GMT) and parliament is expected to debate the findings later that day.

After seven years, anticipation of the report's findings is mixed between those who anticipate it will shake the political establishment and those who predict a whitewash.

For 179 families, many will simply be hoping for a better understanding of why their loved one died in an unpopular war thousands of miles from home.