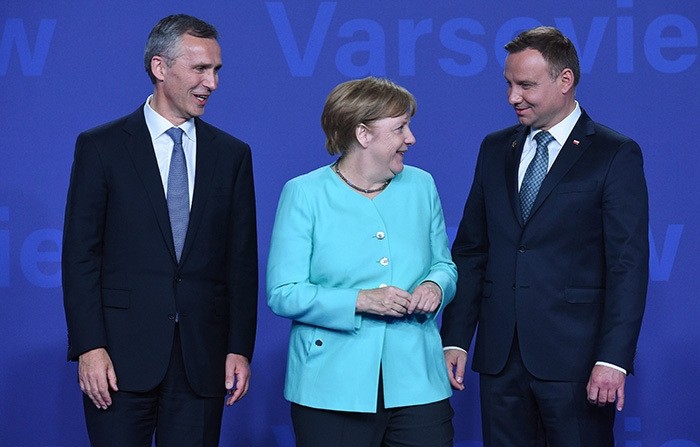 The European Union and NATO signed a joint declaration on Friday to intensify cooperation in addressing common security challenges, including cyberattacks and the refugee crisis.

Addressing a joint press conference with EU leaders in Warsaw, NATO Secretary-General Jens Stoltenberg said the declaration would give a new substance and impetus to the partnership between the two organizations.

"This historic decision will enable us to work even closer together and closer than ever before," he said, adding that member states of both organizations faced unprecedented challenges in recent years.

"Separately, neither NATO nor the EU can fully address them. But together we are a formidable team with the tools necessary to protect our citizens and to project stability in our neighborhood," he added.

He underlined that a close partnership between NATO and the EU had become more essential than ever due to the uncertain international security environment.

"We have a united stance on Russia. The EU has delivered economic sanctions, NATO has delivered the greatest increase in our collective defense since the end of the Cold War," he said.

He also highlighted close cooperation between NATO and the EU in countering human trafficking in the Aegean Sea.

"The number of crossings have decreased from thousands a day to close to zero," he said, praising the work of NATO warships deployed in the area.

Tusk said closer cooperation between the EU and NATO would improve security of citizens in Europe.

"We want to be ready to respond and coordinate our actions if and when one of our members or institutions comes under hybrid threats, we equally want to prevent attacks," he said.

He said close cooperation between the EU and NATO would provide more security in the case of a possible attack targeting critical infrastructure in Europe, cyberattacks targeting banking systems or disinformation campaigns via social networks.

He also said the EU and NATO would intensify intelligence sharing and conduct parallel and coordinated exercises, to be ready against such threats.