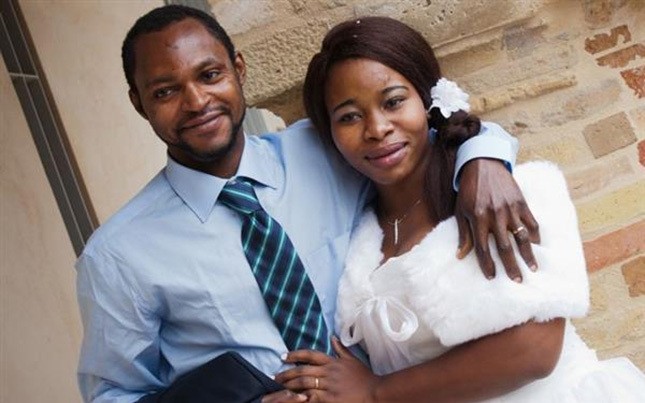 Emmanuel Chidi Namdi and his wife Chimiary are shown in this undated photo during their wedding ceremony. (AP Photo)
by Daily Sabah with AP Jul 08, 2016 12:00 am

A Nigerian asylum-seeker who had fled the Boko Haram terror group was beaten to death by a racist football holigan in the north-central Italian town of Fermo on Tuesday.

Emmanuel Chidi Namdi was beaten when he tried to defend his wife after the hooligan insulted her with a racial slur and started to drag her, local officials said.

The suspect, Amedeo Mancini, is in custody while prosecutors decide whether to charge him with murder. He hasn't made a statement and it wasn't immediately clear if he has a lawyer.

Witnesses said Namdi was struck, first with a street sign ripped out of the pavement, then kicked, when he sought to defend his wife, but didn't strike first.

Interior Minister Angelino Alfano visited the town Thursday and told reporters that there was the possibility any murder charge could be stiffened by the aggravating factor of racial hatred in the case against Mancini. Alfano insisted that Italy as a whole welcomes migrants.

The Nigerian was bludgeoned and fell into a coma, a local priest involved with assisting asylum-seekers said. He died Wednesday in a hospital.

The man, and his later-to-be-wife, both Christians, fled after Boko Haram attacked their village church, killing two of the man's relatives, Fermo church officials said. After a harsh land journey in Africa, they took a smuggler's boat from the Libyan coast. After rescue at sea, they were eventually settled in Fermo, where several parishes have been helping migrants.

Explosive devices were recently found outside four Fermo churches. Alfano said it was unclear if anger against churches for helping migrants might have figured in those incidents under investigation.

At an evening vigil Wednesday, the widow, identified by her first name, Chimiary, cried out to her late husband, "Why do you leave me in this wicked world?"

Italy's head of state, President Sergio Mattarella, asked that she be given all available assistance.

Hundreds of thousands of migrants, rescued at sea, have reached Italy in the last few years. Many want to head to relatives in northern Europe.

The regional Northern League party has railed against migrants, blaming them in general for crime.