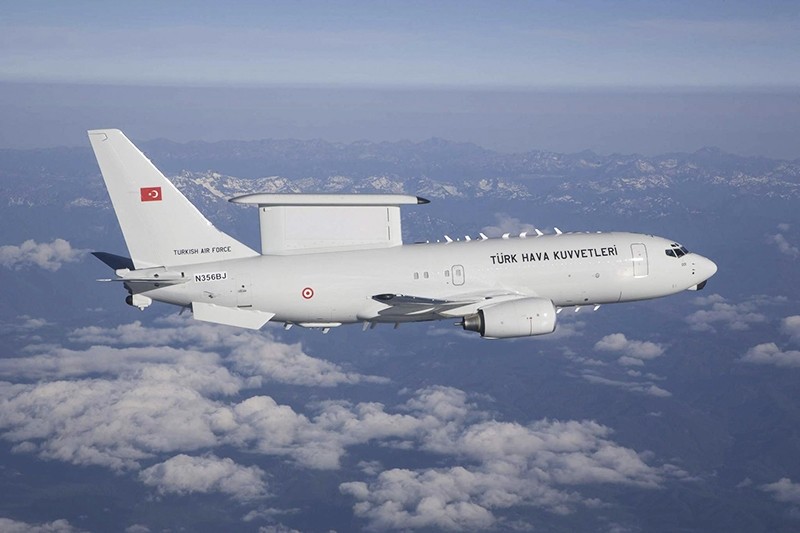 This archive photo shows a Turkish Airborne Warning and Control System (AWACS) aircraft. AWACS aircrafts can detect other aircrafts from up to 400km.
by Daily Sabah with DPA Jul 08, 2016 12:00 am

Turkish radar aircrafts, joined by France and the United Kingdom, will provide aerial security measures for the North Atlantic Treaty Organization (NATO) summit which will be held in Warsaw, Poland, on July 8-9.

The leaders of NATO will gather to discuss in what direction the most powerful military alliance in the world will head over the next two years.

The summit will be attended by the head of 28 states, including Turkey's President Recep Tayyip Erdoğan and the U.S. President Barack Obama, under high security measures.

During the summit, some 6,000 security personnel will be deployed to ensure the safety of the leaders, with Airborne Warning and Control System (AWACS) aircrafts of Turkey, France and the United Kingdom providing additional aerial security.

The dinner of the summit will take place at the historic presidential palace in Warsaw, where the Warsaw pact was signed in 1955.

Here are the most important issues that will be discussed at the summit:

Eastern Europe: NATO leaders are expected to clear the way for more troops to be deployed in Poland, Latvia, Estonia and Slovenia. The move is expected to raise tensions with Moscow. The same goes for progress that NATO is due to mark on the creation of its missile shield in Europe, which Russia perceives as a threat. Ukrainian President Petro Poroshenko will attend the summit.

Fight against Daesh: The US has long been keen to incorporate NATO in its fight against the Daesh terrorist group in Syria and Iraq, but countries such as Germany have been wary of the alliance's direct involvement. In Warsaw, the leaders are expected to take small steps, by approving the deployment of NATO surveillance planes near Syria and a return of NATO military trainers to Iraq. Turkey's border with Syria is also expected to be strengthened.

Afghanistan: A number of countries participating in NATO's training mission in Afghanistan, such as Germany and the United States, had initially planned to whittle down their presence in the country this year. But continuing Taliban violence prompted a rethink, especially after the insurgents managed to temporarily overrun the northern provincial capital of Kunduz last year. NATO leaders are expected to promise Afghanistan continued support, including financial assistance for its security forces until at least 2020.

Cooperation with the EU: NATO has been assisting the EU with its fight against migrant smugglers in the Mediterranean Sea and is expected to offer further support to the EU's Operation Sophia off the Libyan coast. The Libyan government would, however, have to ask for the NATO assistance. The military alliance is also keen to cooperate with the EU on hybrid threats and cybersecurity.

Defense spending: NATO states have set themselves to have their yearly defense spending reach 2 percent of gross domestic product by 2020. But many allies are stagnating at levels under 1.5 per cent. It is expected that they will face pressure in Warsaw to do more.

Cyber: NATO countries are preparing for the possibility that wars will in the future also be fought in the digital world, for instance through hacker attacks that could paralyze electrical grid or communication technology. To better prepare itself against such attacks, the alliance wants to add cyberspace as a NATO operational domain. This will allow additional resources to be made available and cyberattacks to be handled like air, sea or land attacks would be.