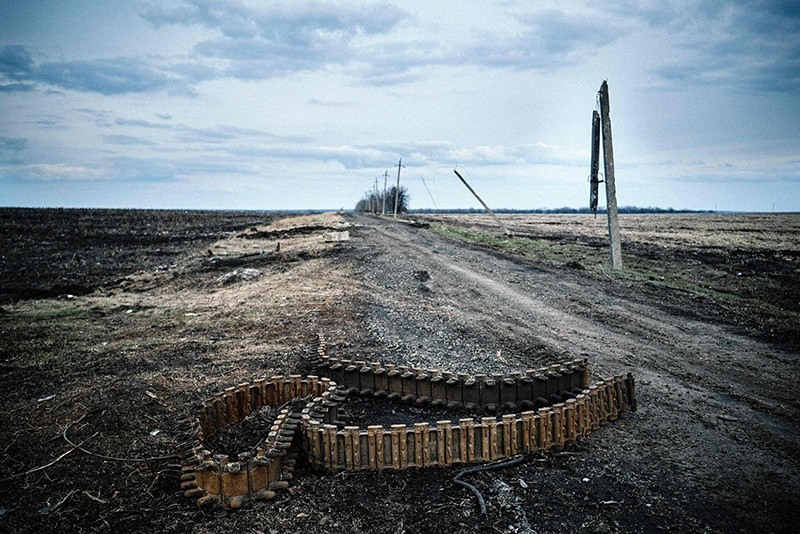 This file photo taken on April 06, 2015 shows a chain of destroyed Armour Personnel Carrier on the ground in a field near the village of Nikishino, eastern Ukraine. (AFP Photo)
by Jul 14, 2016 12:00 am

The United Nations on Thursday said Ukraine's forces had indiscriminately shelled residents while pro-Russian insurgents and Kiev battalions had summarily killed civilians in what may have constituted "war crimes".

The United Nations High Commissioner for Human Rights (OHCHR) study painted a bloody picture of inhumane treatment of captives and non-combatants as well as the engagement of multiple-rocket systems never intended for use in urban areas.

It particularly pointed the finger of blame at rebel groups within the self-proclaimed "people's republics" of Lugansk and Donetsk -- a separatist region in Ukraine's eastern rustbelt that Kiev says is backed up by Russia.

The 26-month revolt against the pro-Western government in Kiev has killed nearly 9,500 people and plunged Moscow's ties with the West to a post-Cold war low that has complicated the resolution of other urgent matters such as the Syrian war.

The Kremlin persistently denies either plotting or backing the insurgency in order to keep its western neighbor -- the largest of the former Soviet republics outside Russia -- within its historic sphere of influence.

The exhaustive study into the Ukrainian conflict by OHCHR was conducted between January 2014 and May of this year.

"OHCHR recorded executions of members of Ukrainian forces and elements of armed groups who had surrendered... mainly in 2014 and during the first half of 2015," the report said.

"OHCHR also recorded a considerable number of alleged summary executions and killings of civilians who were not taking part in hostilities, mostly in 2014 and in early 2015."

The series of alleged crimes committed by Kiev's troops included one in which two suspected rebels were kept in a dry well and then killed by "a drunken soldier" who threw a grenade down the shaft.

Such cases are "recognized as a war crime in an armed conflict," the OHCHR said.

The UN report estimated that about 2,000 civilians have died in one of Europe's bloodiest conflicts since the 1990s Balkans wars.

"The vast majority of civilian casualties, recorded on the territories controlled by the Government of Ukraine and on those controlled by armed groups, were caused by indiscriminate shelling of residential areas, in violation of the international humanitarian law (on) principle of distinction."

The Ukrainian army has resorted to targeting militia-held areas from distant positions with highly imprecise rockets and shells.

Human rights groups have previously accused both sides of torturing and executing their captives -- a charge that Kiev has repeatedly vowed to investigate and resolve.

But the OHCHR said "there has been no accountability for the vast majority of alleged summary executions and killings committed in the conflict zone."

The tragic chain of events began to unfold when then-president Viktor Yanukovych unexpectedly pulled out of a historic deal with the European Union in favor of closer ties with Russia in November 2013.

The three months of pro-EU protests that followed culminated in more than two days of carnage that the OHCHR said killed 108 protestors and bystanders as well as 13 law enforcement officers loyal to Yanukovych.

The shock of seeing more blood spilt in Ukraine than at any time since World War II prompted the government to effectively dissolve and Yanukovych to flee to Russia with the help of a secret operation conducted by Kremlin special agents.

The OHCHR did not conclude who was responsible for firing the first shots during the standoff between protesters and the anti-riot police -- an issue hotly disputed by Moscow and Kiev.

But it noted that the demonstrations were "characterized by violence and excessive use of force by the police and other law enforcement agencies."