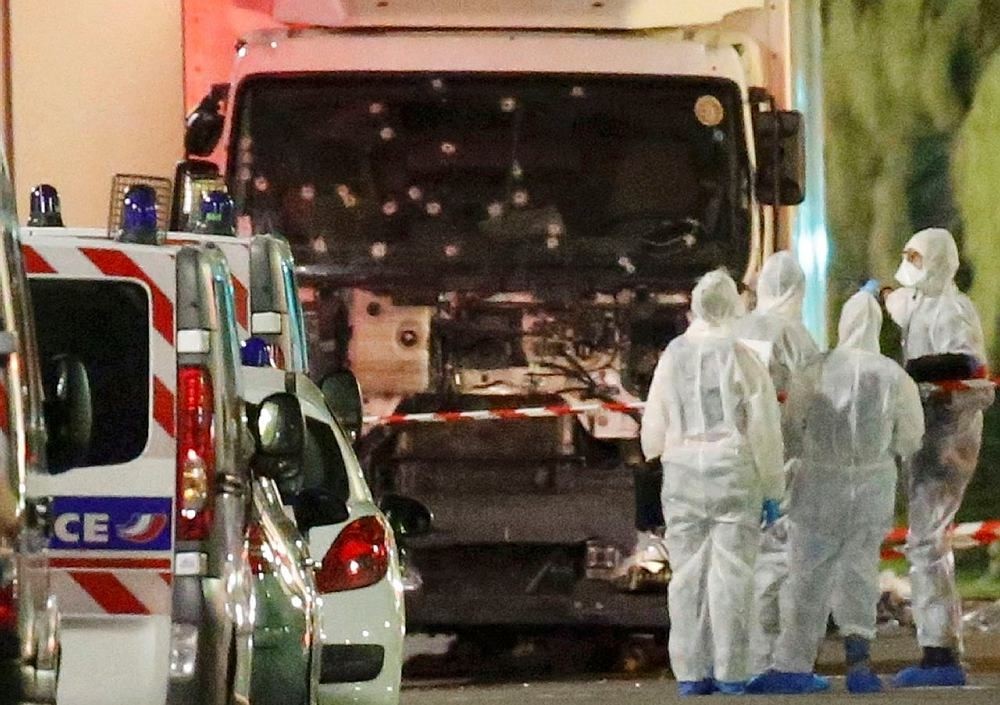 French police forces and forensic officers stand next to a truck July 15, 2016 that ran into a crowd celebrating the Bastille Day national holiday on the Promenade des Anglais killing at least 60 people in Nice, France, July 14. (Reuters Photo)
by Daily Sabah with Wires Jul 15, 2016 12:00 am
French TV sources said early Friday that police found explosives and firearms inside the truck used in the Nice attack in France which killed at least 84 and injured 202.

Christian Estrosi told BFM TV that "the driver fired on the crowd, according to the police who killed him."

After the news of the attack by a truck that ran into crowds watching a fireworks display on the Bastille Day national holiday, killing at least 84 people and injuring scores, supporters of Daesh celebrated on social media.

"The number of those killed had reached 62 french crusaders and sinful infidels in Nice, France.. God is great, God is great," read one tweet.

The driver drove at high speed for over 100 metres (yards) along the famed Promenade des Anglais seafront in the French Riviera city of Nice before hitting the mass of spectators. The driver was shot dead, sub-prefect Sebastien Humbert told France Infos radio.

Humbert described it as a clear criminal attack. The driver was not yet identified. Residents of the Mediterranean city, which is close to the Italian border, were advised to stay indoors. There was no sign of any other attack.

Almost exactly eight months ago Daesh militants killed 130 people in Paris. On Sunday, France had breathed a sigh of relief as the month-long Euro 2016 soccer tournament ended without a feared attack.