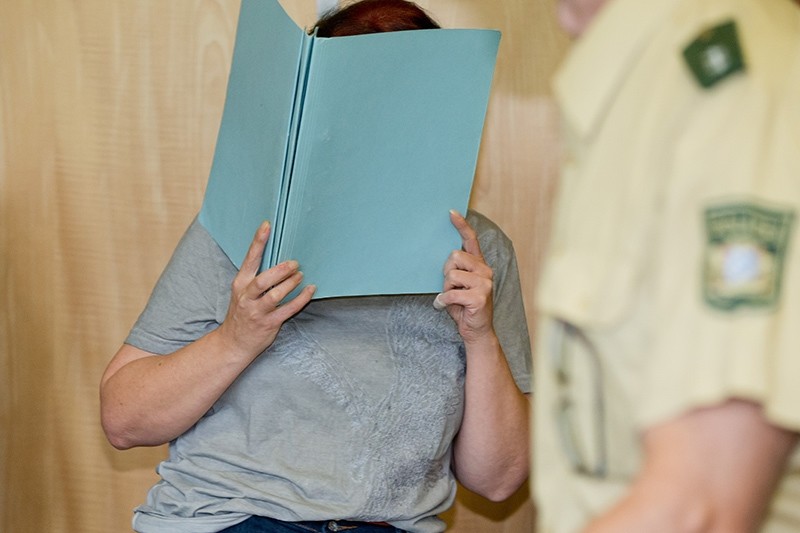 Defendant Andrea G. , who is accused of murder, covering her face with a folder, in the court room of the regional court in Coburg, Germany, Tuesday July 12, 2016. (AP Photo)
by Jul 15, 2016 12:00 am
Public prosecutors in Germany on Friday demanded a life sentence for a mother accused of killing four of her eight babies.

Eight infant bodies were discovered in November wrapped in towels and plastic bags at a family home in Wallenfels, in the southern state of Bavaria.

The defendant had confessed Tuesday in court to killing some of the infants, saying she had wrapped all the newborns in towels and hid them, no matter if they were dead or alive.

Because of the seriousness of the crime, the 45-year-old should spend a minimum of 20 years in prison, prosecutor Martin Dippold told the court in Coburg.

Dippold said the woman had acted out of base motives.

Her defence pleaded manslaughter, saying she had been in a state of panic. The woman had been socially isolated and was in an unhappy relationship with a man who did not want any more children, her lawyer Till Wagler said.

A psychiatric expert said the woman suffered neither from psychological problems nor alcoholism and was fully criminally liable.

The prosecution also called for a four-year prison sentence for the children's father, for aiding and abetting the killings. The lawyer for the 55-year-old asked for an acquittal, saying his client had not known about the pregnancies and births.

The mother is accused of premeditated murder for only four of the children, as it was not clear if the other four had been alive at birth and medically viable.

The couple, who separated before the bodies were found, have three living children together, as well as another two each from previous marriages. The sentence is due on July 20.