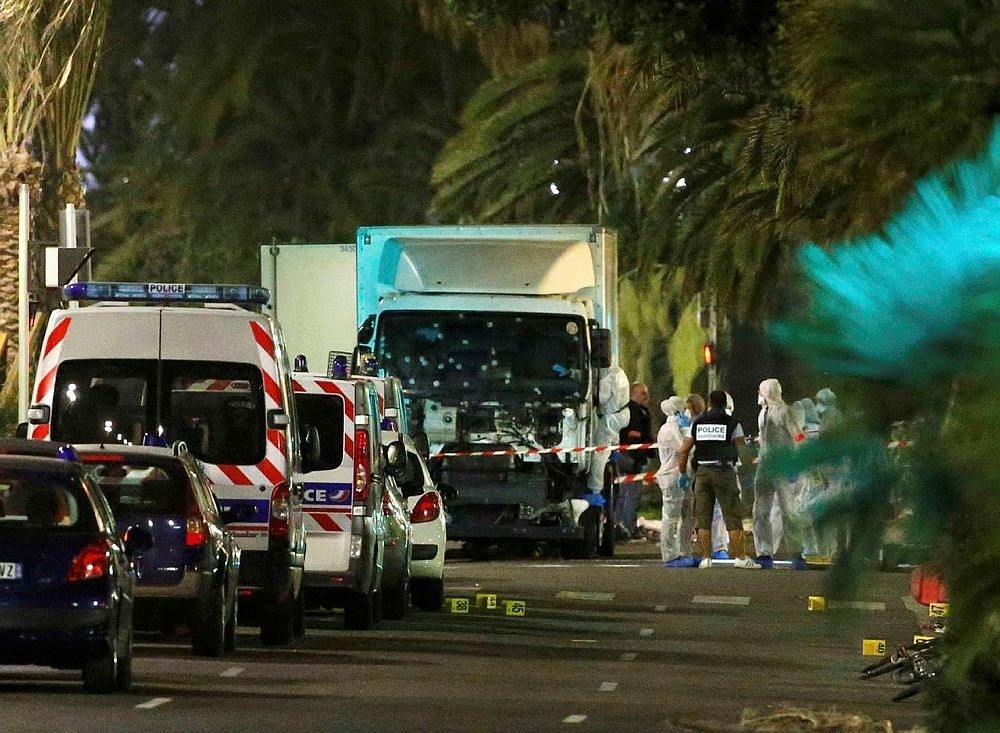 French police forces and forensic officers stand next to a truck July 15, 2016 that ran into a crowd celebrating the Bastille Day national holiday on the Promenade des Anglais killing at least 60 people in Nice, France, July 14. (Reuters Photo)
by Daily Sabah Jul 15, 2016 12:00 am
Turkish officials strongly condemned the terrorist attack in Nice, France, which resulted in the killing of over 84 people. President Erdoğan, Prime Minister Binali Yıldırım,EU Affairs Minister Ömer Çelik and Presidential Spokesperson İbrahim Kalın condemned the terror attack, while the Foreign Ministry issued a statement expressing solidarity with the people of France.

President Erdoğan condemned the brutal attack in a statement released by the Presidency.

"I strongly condemn the inhumane act which took place during the celebration of national holidays in Nice," President Erdoğan said, and offered condolences.

In the statement, Erdoğan said that Turkey understands the feelings of the French people, as a country which has also suffered from terrorist attacks and added that it is once again evident that it is necessary to fight terrorism in a determined manner.

"I strongly condemn the cowardly terrorist attack that bloodied Nice on the national holiday," PM said in French.

"Turkey is always with the states of the world in the international fight against terrorism and also shares the pain of the French people," he added.

"Terrorism is a crime against humanity, and that no one knows when it will hit soon. I wish God's mercy to those who lost their lives in this heinous attack and a speedy recovery to the injured," Yıldırım concluded.

In a statement, the Foreign Ministry said that Turkey is fully in solidarity with France in its fight against terrorism.

"Together, we will continue our fight against these villains with determination" the statement said and added that Turkey expresses its condolences to France and the French people.

Presidential Spokesperson İbrahim Kalın also condemned the attacks, and offered condolences to the victims and their families.
" The modern barbarians who perpetrated the attack have nothing to do with religion and humanity. There is no room for them in this world -- nor should there be. On this sad day, we stand in solidarity with France" he said and added that "joint action against all forms of terrorism is a global obligation and necessity."

"I condemn the horrible terrorist attack in Nice, France in the strongest possible terms. My thoughts are with the victims and their families. Terror is always brutal whereever or in whatever form or with whatever motives it attacks on humanity. We should all unite against it," he said.

Multiple deaths and injuries were reported in Nice, France Thursday as a truck plowed into the Bastille celebrations in a possible terror attack.

Firearms and grenades were found inside the truck as as anti-terrorist investigators took over the Nice attack probe.

84 people were killed in the attack and at least 100 were injured with 47 in critical condition.