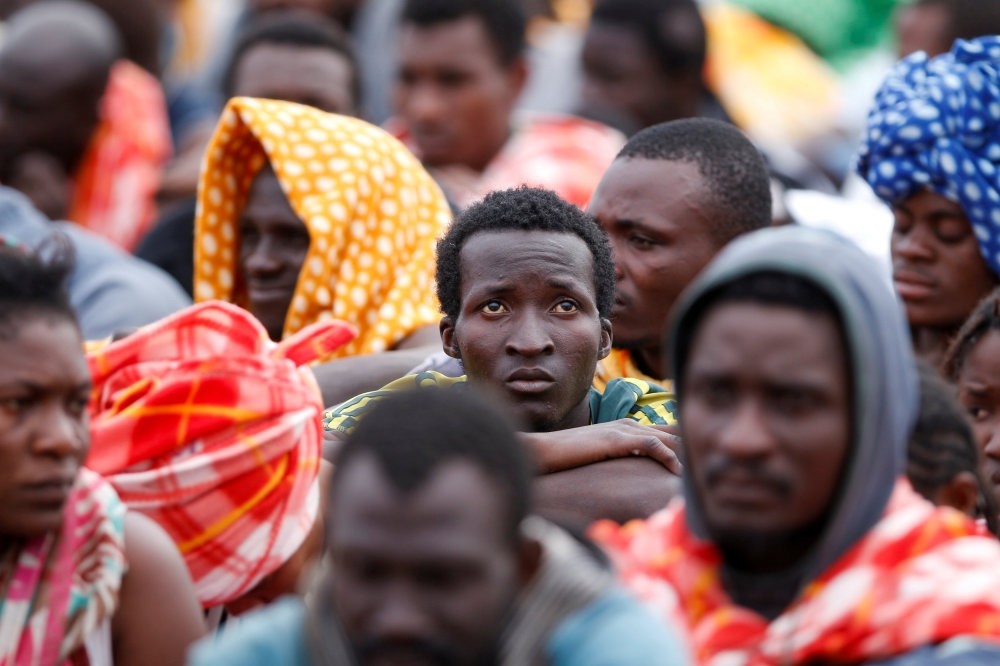 Migrants disembark from a vessel in the Sicilian harbour of Augusta, Italy, June 24.
by Compiled from Wire Services Jul 16, 2016 12:00 am

The remains of up to 675 victims have been recovered from a 2015 migrant shipwreck, Italy's navy said on Thursday, as it concluded an operation to retrieve corpses from one of the worst disasters in the Mediterranean

Italy has finished the gruesome task of recovering migrants' bodies from a fishing boat that sank with hundreds of people onboard more than a year ago, the navy said Thursday.

"In total, we have 675 body bags," navy Commander Nicola De Felice told journalists in Sicily, where the boat was placed after being salvaged from the sea bed at a depth of 370 meters.

It was the worst maritime tragedy in the Mediterranean since World War II. The 28 survivors rescued in April last year said there had been up to 800 people on board when the vessel sank.

The disaster happened when the converted wooden fishing trawler collided with a Portuguese merchant ship that had responded to its SOS signal. The impact caused panicked passengers to surge to one side of the boat and it keeled over in pitch darkness.

The navy said 458 bodies had been extracted from inside the trawler since it was brought ashore at the end of June. Another 169 had been recovered on or around the wreck in recent months.

And after the boat was raised, divers had returned to the sea bed and brought to the surface another 48 bodies. Catania prosecutors said the victims were believed to total 700, taking into account that some of the bodies may never be found.

Giuseppe Romano, a senior firefighter who had helped extract the bodies from the wreck, said people smugglers had packed the ship so tightly that "there were five people per square meter in the hold".

The boat with its grisly cargo had been placed inside a refrigerated tent 30 meters long, 20 meters wide and 10 meters high. Cristina Cattaneo, head of the Labanof Forensic Pathology Laboratory in Milan, has worked painstakingly to identify the dead.

She and her team have deciphered the country of origin of some of the victims "by examining their personal belongings, their clothes and their documents, which included several requests for political asylum."

"We have studied at least 297 of the victims so far, including women and small children. There are people from Ethiopia, Eritrea, Bangladesh, Sudan, Somalia, Mali, Gambia, Senegal, the Ivory Coast and Guinea", she told journalists.

She said Italy had already received requests from 57 Senegalese families who wanted to recover their loved ones' bodies as well as one from a family from Guinea based in the United States.

The complex and costly salvage operation was conducted by diving and marine company Impresub and heavy lifting specialists Fagioli under the supervision of the navy.

Italian Prime Minister Matteo Renzi had vowed to give all of the victims decent burials as a way of highlighting the human cost of the ongoing migrant crisis on Europe's southern shores.

More than 3,600 migrants have died worldwide this year while fleeing, a report by the International Organization for Migration (IOM) revealed.

Investigations by the IOM revealed that 3,694 are presumed to have either died or gone missing in the first six months of this year. The figure is an increase of 18 per cent over the same period last year, IOM Director General William Swing told dpa.

Since 2014, more than 10,000 migrants have died or are feared to have drowned while attempting the perilous journey to Europe by sea, most losing their lives in the central Mediterranean, according to the U.N. refugee agency (UNHCR).
RELATED TOPICS