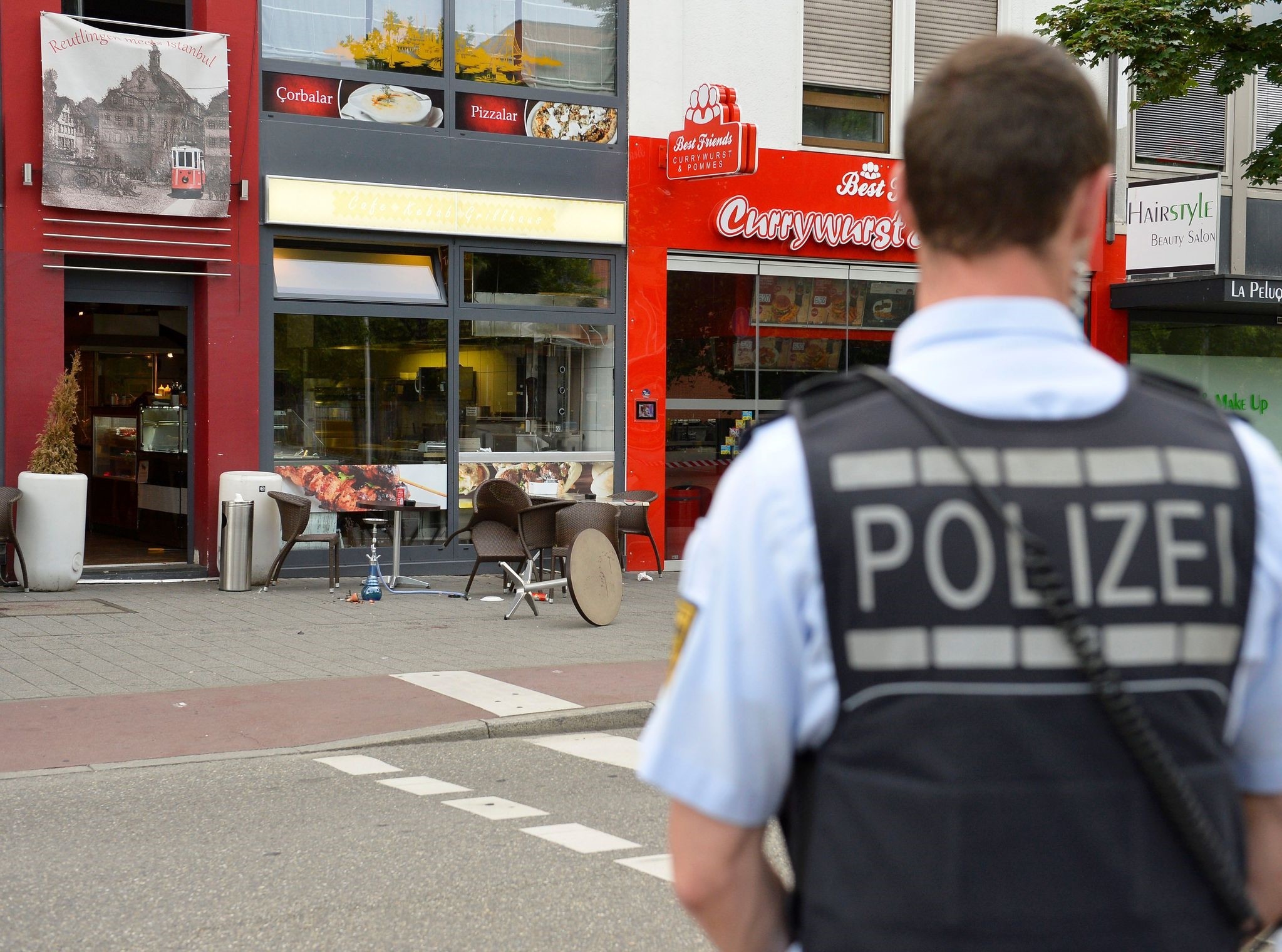 A police officer stands in front of a fastfood restaurant in Reutlingen, southwestern Germany, on July 24, 2016 where a Syrian asylum-seeker killed a woman and injured two people with a machete. (AFP Photo)
by Jul 24, 2016 12:00 am

A man wielding a machete killed a pregnant woman and wounded two other people in the southern German city of Reutlingen on Sunday before being arrested, the Bild newspaper reported.

The man was an asylum-seeking 21-year-old Syrian man who had been involved in previous incidents causing injuries to other people, he said. The spokesman had no immediate information on when the man arrived in Germany, or when the previous incidents took place.

This was the fourth violent assault on civilians in western Europe in 10 days, though police said it did not appear linked to terrorism.

The incident, however, may add to public unease surrounding Chancellor Angela Merkel's open-door refugee policy that has seen over a million refugees enter Germany over the past year, many fleeing war in Afghanistan, Syria and Iraq.

German police said they arrested the machete-wielding Syrian asylum-seeker after he killed a woman and injured two other people in the southwestern city of Reutlingen near Stuttgart.

The Syrian had been involved in previous incidents causing injuries to others, and had apparently acted alone, a police spokesman said.

"Given the current evidence, there is no indication that this was a terrorist attack," a police statement said.

"The attacker was completely out of his mind. He even ran after a police car with his machete," the mass-circulation Bid newspaper quoted a witness as saying. A motorist knocked down the attacker soon afterward and he was then taken into custody by police, the witness told Bid. The police spokesman said the man was being interrogated after receiving medical treatment.

Neither Sunday's attack nor a shooting rampage by an 18-year-old Iranian-German man that killed nine people in Munich on Friday bore any sign of connections with terrorism, police said.

The militant Telegram channel, however, seized the moment to urge more "lone wolf" attacks. "Perhaps (any) small attack you do may add to the cause for the disbelieving (governments) to finally retreat from attack or oppressing Muslim lands," the group said in an online post, according to the SITE Intelligence Group monitoring organization.

Daesh claimed responsibility for both a July 18 axe attack by a 17-year-old refugee that injured five people near Nuremburg in southern Germany, and a July 14 attack in which a Tunisian man drove a truck into Bastille Day holiday crowds in the French city of Nice, killing 84 people.

MANY ATTACKS PRE-EMPTED IN GERMANY

Unlike neighbors France and Belgium, Germany has not suffered a major deadly attack by militants in recent years, though security officials say they have thwarted a large number of plots.

But opposition critics pin the blame for any violent attacks by migrants on Merkel's liberal refugee policy.

A leader of the anti-immigrant Alternative for Germany (AfD)posted a Twitter message after the Munich shooting that said, "Merkel's unity party: thank you for the terror in Germany and Europe!" The message was later deleted.

The gunman, identified by investigative sources as David Sonboly, opened fire near a busy shopping mall, killing nine people and wounding 35 more, before turning his pistol on himself as police approached several hours later.

Bavarian state investigators said materials found in his home showed the gunman had begun plotting the attack a year ago after visiting the site of a 2009 school shooting in southwest Germany in which 15 people were killed.

Munich police on Sunday arrested a 16-year-old Afghan youth as a possible "tacit accomplice" to the shooting and said he was suspected of having failed to report the gunman's plans.

But De Maiziere, a strong advocate of increased video surveillance, said German gun laws were already very strict and it was critical to understand how the attacker had obtained his pistol.

Bavarian state officials said on Sunday the Munich gunman bought his reactivated 9mm Glock 17 pistol - the most widely used law enforcement weapon worldwide - on the dark net, a part of the Internet accessible only via special software.

German lawmaker Stephan Mayer, a spokesman for Merkel's conservatives in parliament, told Reuters he supported stricter regulations on the weapons trade and the creation of a European weapons registry modelled on the German national registry.

Burkhard Lischka, a spokesman for the Social Democrats in parliament, told Die Welt newspaper: "We must put a spotlight on the dark net. We have to give our security agencies the staffing and financial resources to stop this illegal trade."

The European Union is considering reforms that would tighten gun controls within the 28-nation bloc and make it easier to trace the origin of weapons bought legally.

The proposed changes, which must still be enacted by EU member states, would also set more stringent rules for deactivating previously fully-functioning guns and making them available for sale.