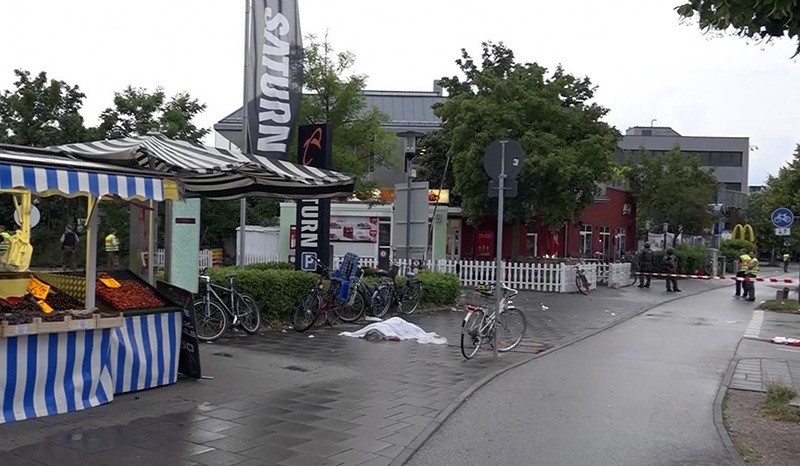 In this grab taken from video, a body covered with a sheet outside the mall, in Munich, Germany, Friday, July 22, 2016 (AP Photo)
by German Press Agency - DPA Jul 24, 2016 12:00 am
The teenager who killed nine people during a shooting spree in Munich had been planning the attack for a year, Bavaria police chief Robert Heimberger says.

According to prosecutor Thomas Steinkraus-Koch, the gunman was not motivated by a political ideology and chose his victims randomly.

The Iranian-German teenager acquired the semi-automatic pistol he used to kill nine people in Munich on the dark web and did extensive research on mass shootings, Bavaria's interior minister told the B24 broadcaster.

The 18-year-old had a copy of the manifesto of Norway attacker Anders Breivik saved on his computer and travelled "within the past two years" to the scene of a 2009 school shooting in the southern German town of Winnenden, Joachim Herrmann told the broadcaster.

Six of the nine victims had a non-German heritage, police said earlier Sunday. They included three 14-year-olds, two 15-year-olds, and four others aged 17, 19, 20 and 45.