Security increases in Germany after spate of attacks in 1 week 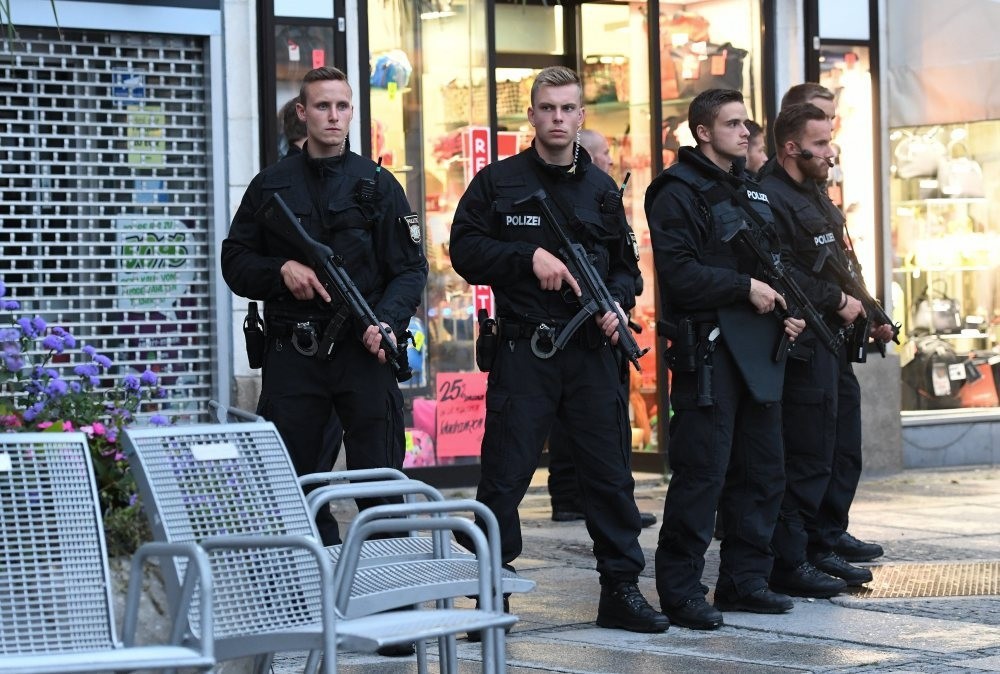 After a spate of bloody attacks in Germany, security measures have been beefed up in the country. The Bavarian interior minister urged for the deployment of military to support police

After four attacks in a week that killed or injured dozens, Germany has been on high alert, beefing up security measures. Authorities said yesterday that a failed asylum-seeker from Syria blew himself up and wounded 12 people after being turned away from an open-air music festival in southern Germany. It was the fourth attack to shake Germany in a week.

A 27-year-old set off explosives he was carrying in a backpack at a bar on Sunday, having been refused entry to a festival in the southern town of Ansbach because he didn't have a ticket. Roman Fertinger, the deputy police chief in nearby Nuremberg, said it was likely there would have been more casualties if the man had managed to enter the concert venue.

Three of the 12 victims suffered serious injuries in the blast. The attacker's pack contained sharp bits of metal.

The unnamed man had repeatedly received psychiatric treatment, including twice for attempted suicide, authorities said. Police said the attacker had also been known for drug possession.

Authorities on Monday morning raided an asylum shelter in the suburbs of Ansbach. A team of 30 investigators were interviewing the man's acquaintances and examining evidence collected from his home.

Bavaria's top security official said a video has been found on the Ansbach bomber's phone showing him pledging allegiance to the leader of DAESH.

The explosion came as Germany, and the southern state of Bavaria in particular, have been on edge. Earlier Sunday, a Syrian man killed a woman with a machete and wounded two others outside a bus station in the southwestern city of Reutlingen before being arrested. Police said there were no indications pointing to terrorism and the attacker and the woman worked together in the same restaurant.

A state of emergency has been declared in Munich after the attack, with anti-terror unit of the police have been deployed to the city. Residents of Munich were urged to stay home after the rampage.

An axe attack on a train near Wurzburg last Monday wounded five. A 17-year-old Afghan asylum-seeker was shot and killed by police when he fled the scene, and DAESH claimed responsibility for the attack.

These attacks followed shortly after a Tunisian man driving a truck killed 84 people when he plowed through a festive crowd celebrating Bastille Day in Nice, along the famed French Riviera.

Munich authorities said Monday at a news conference that a 16-year-old Afghan friend of the Munich attacker may have known of the attack in advance.

Police said Monday the teenager was arrested late on Sunday, and investigators were able to retrieve a deleted chat between him and the attacker on the messaging app WhatsApp.

Investigators say the two teenagers met last year as in-patients at a psychiatric ward. Both were being treated for addiction to online games, among other issues.

After the Munich attack, Herrmann urged the German government to allow the country's military to be deployed to support police during attacks. Germany's post-war constitution, because of the excesses of the Nazi era, only allows the military to be deployed domestically in cases of national emergency. Herrmann has called those regulations obsolete and said that Germans have a "right to safety."

Minister says threat of attacks remain high in Germany The danger of attacks in Germany remains high, an interior ministry spokesman said on Monday after a spate of four attacks over the last week that have left 10 people dead and 34 injured.

"The threat of attack has been high for a long time and remains high," Interior Ministry spokesman Tobias Plate told a government news conference.

Interior Minister Thomas de Maiziere on Monday cautioned Germans against branding refugees as a security threat after a rash of attacks over the last week. "We must not place refugees under general suspicion despite individual cases that are under investigation," he said in an interview with the Funke media group, following a string of assaults in southern Germany, some involving asylum-seekers. In previous extremist attacks in Europe, the bitter debate about the influx of refugees has come under the spotlight several times. Even though some political figures warned against scapegoating migrants, who already flee war and violence, there has been a shift towards anti-migrant sentiment across Europe.
RELATED TOPICS