Germany warns of anti-migrant backlash after a week of bloodshed 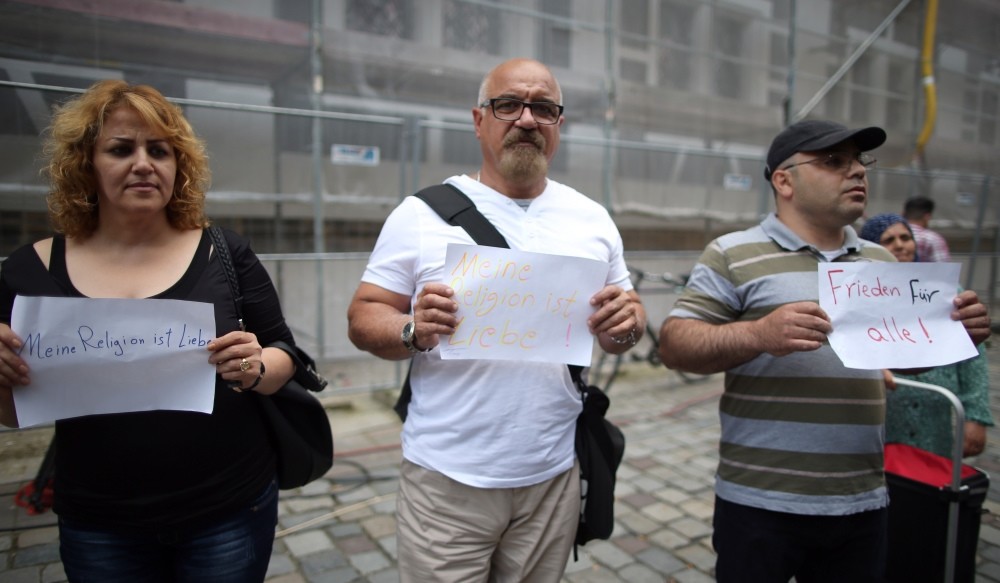 Refugees from Syria and Iraq stand near the site of the attack and hold up signs reading ,Peace for all, and ,My religion is love,, Ansbach, Germany, July 26.
by Daily Sabah with Wires Jul 27, 2016 12:00 am

After four attacks in one week in Germany, migrants and the Muslim community fear they may once again be targeted because of their religion, despite politicians warning of an anti-migrant backlash

German politicians warned on Monday of a potential backlash against migrants after a Syrian asylum seeker blew himself up outside a music festival, capping a week of attacks that has shaken the country.

The 27-year-old attacker wounded more than a dozen people in the southern city of Ansbach on Sunday night and had spent time in a psychiatric facility, according to regional authorities.

Europe's economic powerhouse was already reeling after nine people died in a shopping center shooting rampage in Munich on Friday, and four people were wounded in an axe attack on a train in Wurzburg on July 18.

Merkel's deputy spokeswoman Ulrike Demmer expressed the government's "shock" after the rash of attacks, but also warned against branding all refugees as security threats. "Most of the terrorists who carried out attacks in recent months in Europe were not refugees," she told reporters. "The terrorism threat (among refugees) is not larger or smaller than in the population at large."

Interior Minister Thomas de Maiziere also warned against placing refugees "under general suspicion," despite "individual cases that are under investigation."

Police said the man intended to target the open-air festival, but was turned away as he did not have a ticket, and detonated the device outside a nearby cafe. "If he had made it inside, there would certainly have been more victims," a police spokesman said.

The perpetrator was killed in the blast and 15 people were wounded, four of them seriously.

The assailant, who lived in Ansbach, was already known to police, due to a drug-related offence. A social worker Reinhold Eschenbacher who knew him described him as "friendly, inconspicuous and nice", DPA news agency reported.

After the attacks, anti-migrant remarks and criticism of Merkel's migrant policies have been renewed. Horst Seehofer – the premier of Bavaria, where three of the attacks took place, and one of the most vocal critics of Merkel's refugee policies – said that the government should reverse its decision not to deport criminal migrants to conflict zones.

"We must seriously reconsider how to treat these people going forward, particularly if their behavior falls foul of the law, or if they represent a danger," Seehofer told Munich newspaper Munchner Merkur. Thomas Strobl, the interior minister of Baden-Wurttembuerg, where the deli knife attack took place, demanded a tougher stance against refugees, claiming the number of crimes increases with the rising number of migrants coming to the country.

Stephan Mayer, a deputy from Merkel's conservative bloc, insisted that it was "completely wrong" to blame the government's refugee policy for the recent rash of attacks.

Europe has been on edge for months after a string of deadly attacks claimed by DAESH, including bombings in Brussels and carnage at Bastille Day celebrations in the southern French city of Nice.

Police released more details on Munich mall attacker David Ali Sonboly, saying the 18-year-old was depressed and had spent two months in a psychiatric unit last year. The teen, who had dual German and Iranian nationality, was obsessed with mass killings and spent a year preparing for the shooting spree, according to police.

Hundreds of people, many of them in tears, gathered on Sunday outside the Munich shopping center where the attack took place to pay tribute to the victims.

It is not the first time that Muslims and migrants have been targeted because of their religion after an extremist attack. In fact, most victims of violence by DAESH and other terrorist groups are Muslim, since they fight mostly in majority-Muslim countries and often attack other Islamic communities. Many Muslims felt obliged to speak out against them and say these killings do not represent their faith, such as after DAESH's extremist attacks in Paris that killed 130 people. Similarly, after an attack on a nightclub in Orlando last month, Muslim community in the U.S. faced hate-filled insults and abuse.
RELATED TOPICS