Austrian airport propagates 'travelling to Turkey will only support Erdoğan' 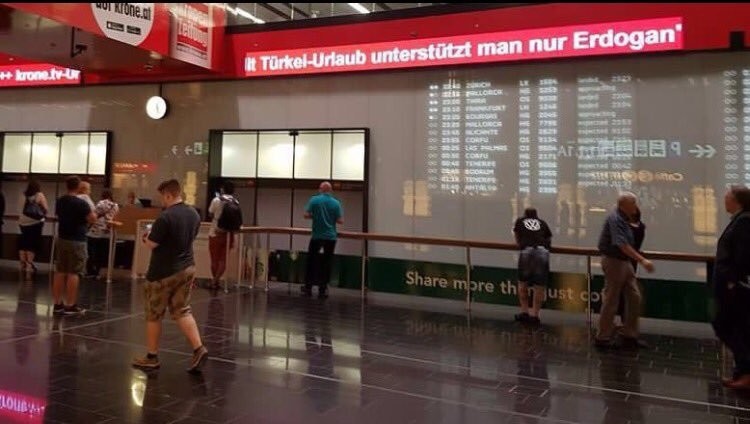 The live ticker in the Vienna airport says travelling to Turkey will only support Erdou011fan.
by daily sabah
Jul 31, 2016 12:00 am

A live ticker at the Vienna airport in Austria displaying a quote from a local newspaper, "With vacation in Turkey you will only support Erdoğan" caused criticism on social media. The quote was later removed as Turkish ambassador to Austria, Mehmet Hasan Göğüş visited the airport upon order by Minister of Foreign Affairs, Mevlüt Çavuşoğlu.

"The expression is a political attack against Turkey's tourism," said a Twitter user, while another tweeter said the expression resembled the Nazi boycott of Jewish businesses.

The message on the airport's live ticker came only days after the mayor of an Austrian town called on residents to remove Turkish flags from their homes.

The flags were hung by ethnic Turkish residents to show their support for democracy in Turkey following the failed military coup, which resulted in at least 246 deaths.