Muslims go to Catholic Mass in Italy in solidarity 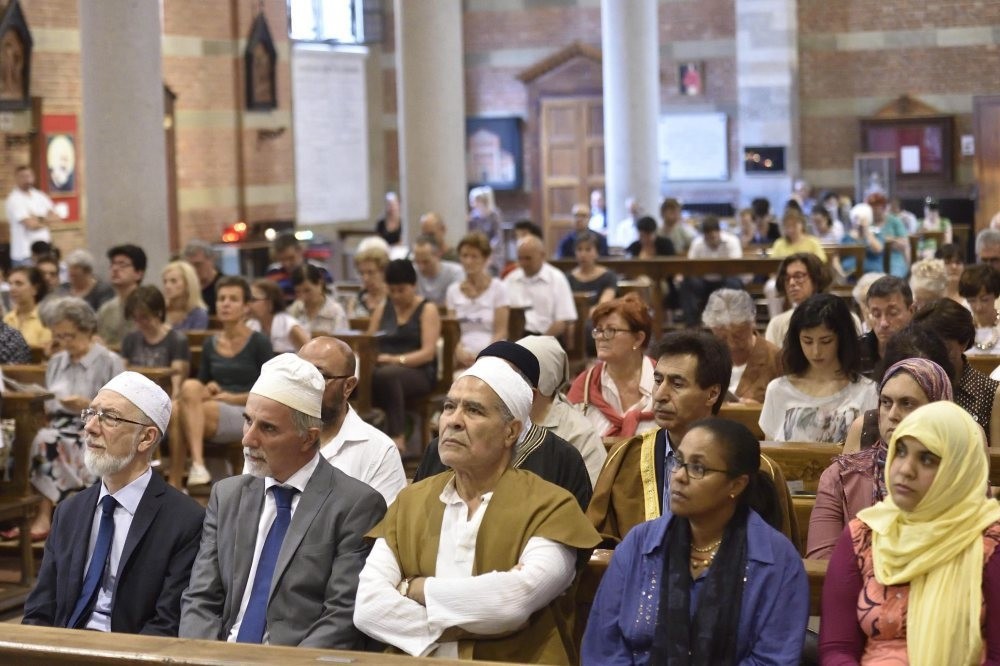 Members of the congregation in Santa Maria Caravaggio Church in Milan during a multi faith service organized by Italy's Islamic Religious Community (COREIS), July 31.
by Daily Sabah with AP Aug 02, 2016 12:00 am

A day after Muslim groups joined Christians to mourn a French priest killed by terrorists, Muslims seeking to forge unity between religious communities attended Masses in France and Italy on Sunday

In France and Italy, Muslims flocked to Mass on Sunday in a gesture of interfaith solidarity, following a drumbeat of terrorist attacks that threaten to deepen religious divisions across Europe.

From the towering Gothic cathedral in Rouen, only a few miles from where 85-year-old Rev. Jacques Hamel was killed on Tuesday by two terrorists, to Paris' iconic Notre Dame, where the rector of the Mosque of Paris invoked a papal benediction in Latin, many churchgoers were cheered by Muslims in their midst.

Interviewed outside the cathedral in Rouen, Jacqueline Prevot called it "a magnificent gesture." "Look at this whole Muslim community that attended Mass," she said. "I find this very heartwarming."

French television broadcast scenes of interfaith solidarity from all around France, with Muslim women in headscarves and Jewish men in kippot crowding the front rows of Catholic cathedrals in Lille, Calais or the Basilica of St. Denis, the traditional resting place of French royalty.

There were similar scenes in Italy, where the head of Italy's Union of Islamic communities — Izzedin Elzir — called on his colleagues to "take this historic moment to transform tragedy into a moment of dialogue." Secretary-general of the country's Islamic Confederation Abdullah Cozzolino spoke at the Treasure of St. Gennaro chapel. Three imams attended Mass at the St. Maria Church in Rome's Trastevere neighborhood, donning their traditional dress as they entered the sanctuary, and sat down in the front row.

Ahmed El Balazi, the imam of the Vobarno mosque in Italy's Lombard province of Brescia, said he did not fear repercussions for speaking out. "These people are tainting our religion and it is terrible to know that many people consider all Muslims terrorists. That is not the case. Religion is one thing. Another is the behavior of Muslims who don't represent us."

Italian Foreign Minister Paolo Gentiloni thanked Italian Muslims for their participation in the mass in Rome, saying they "are showing their communities the way of courage against fundamentalism."

Among the parishioners in Rouen was a nun who survived Tuesday's siege in nearby Saint-Etienne-du-Rouvray, which began when two 19-year-old attackers stormed a stone church and killed Hamel as he was celebrating morning Mass. She joined her fellow Catholics in turning to shake hands and embracing Muslim churchgoers after the service.

At Notre Dame Cathedral in Paris, Dalil Boubakeur, the rector of the Mosque of Paris, said repeatedly that Muslims want to live in peace. Boubakeur, in a fraternal nod to the Catholic Church, said he was addressing "Urbi et Orbi" - a Latin blessing long identified with the pope, and meaning "to the city and the world."

France as well as Italy are increasing supervision of mosques after the spate of attacks, including Tuesday's attack in France and the July 14 atrocity in Nice, the latter in which a truck driver plowed through a crowd of revelers and killed 84 people. Both attacks were claimed by the DAESH terrorist group.

Italian Interior Minister Angelino Alfano told the Senate this week that authorities were scrutinizing mosque financing and working with the Islamic community to ensure that imams study in Italy, preach in Italian and are aware of Italy's laws.

The Paris prosecutor's office, meanwhile, said a cousin of one of the two 19-year-olds who killed the priest faces preliminary charges of participating in "a terrorist association with the aim of harming others."

In a statement the prosecutor's office said that the 30-year-old Frenchman, identified only as Farid K., "knew very well, if not of the exact place or time, of his cousin's impending plans for violence." In a related development, the prosecutor's office said a man identified as Jean-Philippe Steven J. faces preliminary charges connected to an attempt last month by one of the two killers of the French priest to reach Syria.

This is not the first time after an attack by terrorists that Muslims and migrants have been targeted because of their religion. In fact, most victims of violence by DAESH and other terrorist groups are Muslim, since the DAESH group mostly targets majority-Muslim countries, and often attack Islamic communities which are different from themselves. Many Muslims felt obliged to speak out against DAESH and say these killings do not represent their faith, such as after the extremist attacks in Paris in November that killed 130 people. Similarly, after an attack on a nightclub in Orlando last month, the Muslim community in the U.S. faced hate-filled insults and abuse.
RELATED TOPICS