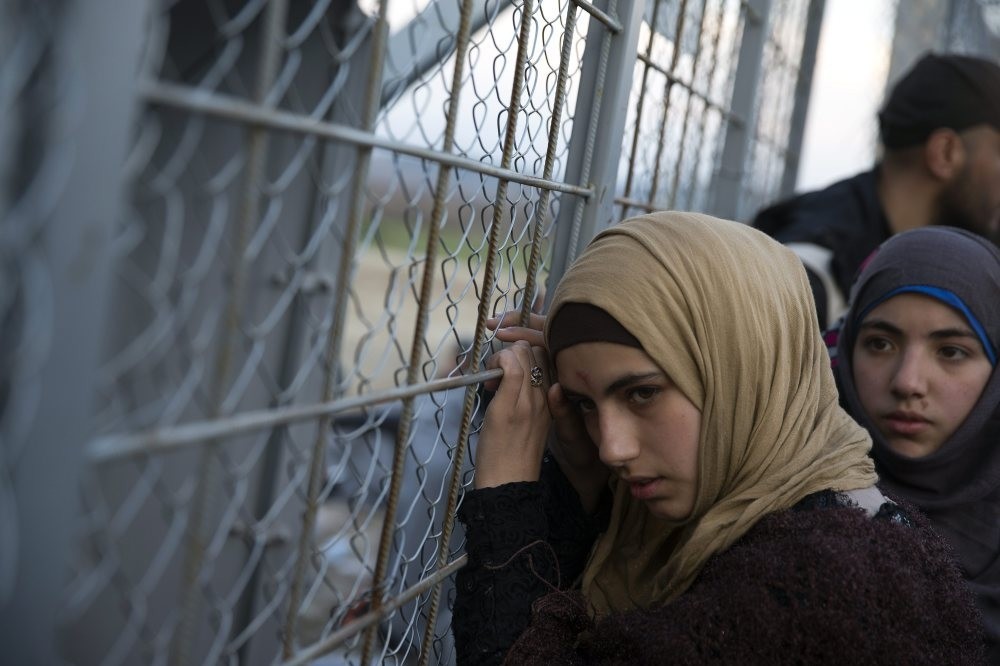 A young Syrian woman leans on the metal fence separating them from Macedonia at the Greek border station of Idomeni, Feb. 28. (AP Photo)
by Daily Sabah with Reuters Aug 06, 2016 12:00 am

Female asylum seekers, including adolescents, said they face violence, exploitation and sexual harassment during their journey to Europe. Some said they tried to notify authorities about harassment, yet they were told that nothing could be done

When Warda left her Syrian hometown of Idlib, she knew she faced a long, difficult journey, but it never crossed her mind that as a young woman she would face increased danger.

For the past four months, the 18-year-old has lived in a makeshift refugee camp by Athens' Pireaus harbor in with her fiancé and six relatives, who made the perilous journey with her to Greece.

Forced to share a tent with her parents and use a mixed bathroom, the lack of privacy is stifling. Large numbers of young men sit in groups and comment on the women around them, which is unnerving.

"It's hard for everyone here, but particularly for women," said Warda, who like many asylum seekers, declined to give her full name.

Female asylum seekers are particularly vulnerable to violence, exploitation and sexual harassment from the moment they leave Iraq and Syria to their arrival on European soil, according to Amnesty International.

The EU recommended separate bathrooms and sleeping areas but these are non-existent in many refugee camps and reception centers in Greece, exposing female asylum seekers to sexual violence, exploitation and harassment, human rights groups say.

Ahmed Hammoud, 18, and his family were forced to sleep in a park while they attended interviews on their claims for refugee status at the European Asylum Support Office (EASO) in Athens. Although the family had requested accommodation during their visit, citing Hammoud's father ill-health after suffering a stroke, none was made available.

For two nights, they slept rough before going back to the island of Lesbos and the Kara Tepe refugee camp, which prioritizes families and vulnerable people.

"The first night was bad enough. My father was in a bad way but the second night was awful," Hammoud recalled. "I woke up to my little sister screaming and crying. My first thought was that she'd been hurt, but it was actually my mother."

When Hammoud found his mother a few seconds later, four men were assaulting her. They ran off before he was able to identify them. "They were trying to rape her," he said, sadly. "But that wasn't enough for them. They also cut and burnt her. My mother hasn't stopped crying since."

Hammoud said when he and his family asked EASO for help the following day, they were told that nothing could be done. Then the police were called to escort them off the premises.

Women and children accounted for 55 percent of migrants passing through Greece in January, according to the latest U.N. figures, more than double the number from last year.

Ever since she arrived in Lesbos in March, 17-year-old Mariam Hussain has repeatedly tried to separate from her father, a man who has long abused her emotionally. Following months of mistreatment and failed attempts to be resettled elsewhere, she attempted suicide.

"I was so depressed. I still am," Mariam said, explaining that staff in the camp did nothing when she asked to be moved from her father. "In fact, they told my father what I'd said." Hussain is pinning her hopes on turning 18 in September. "I can't wait for September 12. Hopefully I'll be free of him at last."

Iota Peristeri from the Greek Asylum Service in Athens, said she was shocked to hear Hussain's story, adding that she was unaware that so many female refugees were experiencing violence during the asylum process.

"Normally, a person like Mariam would go to one of EASO's regional asylum offices, sign an official declaration saying she wants to be separated from her father, and that's it," Peristeri said. "The process should be relatively quick and painless."

Many asylum seekers, women included, say they have been victims of police brutality in Greece – an allegation that police officials deny.

Syrian-Palestinian refugee Salaam, 20, said she was on her way to visit a friend at another camp when she was hit by a police officer trying to prevent her from entering the camp. "They punched me so violently they broke one of my ribs. I've been in bed for a month," she said.

Peristeri from the Greek Asylum Service said this was the first time she had heard of police violence. "I find it surprising," she said. "But, then again, we never actually visit the people or go to the camps."

In January, Amnesty International released a report based on interviews with 40 women in Germany and Norway who traveled from Greece and then across the Balkans. The report said adult and child female migrants face violence and sexual assault on every stage of their journey. Women and girls traveling alone or women accompanied only by children said they felt particularly under threat in Hungary, Croatia and Greece, where they were forced to sleep alongside hundreds of male refugees. The report criticized conditions of some facilities for migrants in some European countries, saying bad conditions at some facilities are also among the factors that make women more scared as they slept in facilities with hundreds of men with lack of privacy.
Last Update: Aug 06, 2016 2:31 am
RELATED TOPICS