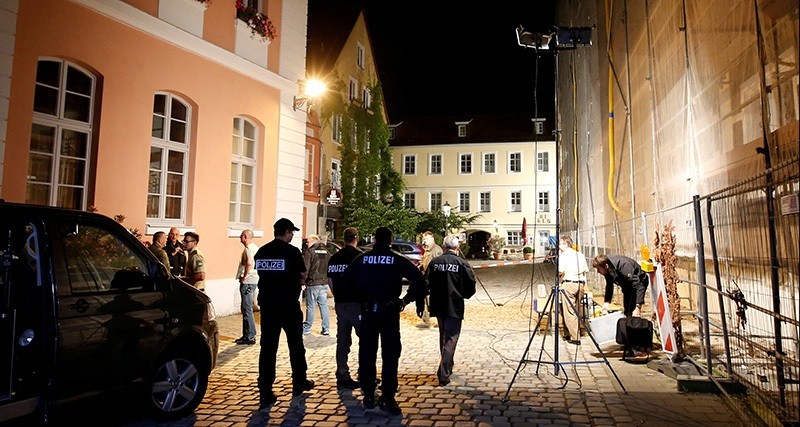 Police investigate an area after an explosion in Ansbach, near Nuremberg, Germany July 25, 2016. (Reuters Photo)
by reuters Aug 06, 2016 12:00 am
Saudi Arabia has offered to help German investigators find those behind the bomb and axe attacks in July, news magazine Der Spiegel reported on Saturday, citing a senior member of the Saudi government.

Saudi authorities are in contact with their German colleagues, responding to new findings that show both attackers were in close contact via a chat conversation with possible backers of the Daesh terror organization from Saudi Arabia, Spiegel said.

Traces of the chat, which investigators have been able to reconstruct, indicate that both men were not only influenced by but also took instructions from people, as yet unidentified, up until the attacks, the report said.

The Daesh terror group has claimed responsibility for an attack on July 18 near Wuerzburg in Bavaria in which a 17-year-old refugee believed to be from Pakistan or Afghanistan wounded five people with an axe before police shot him dead.

A 27-year-old Syrian who blew himself up in Ansbach, southern Germany on July 24 had pledged allegiance to Islamic State on a video found on his mobile phone, investigators said. Daesh claimed responsibility for the bombing, which wounded 15 people.

Bavaria's Interior Minister said at the end of July that the Ansbach bomber had been "significantly influenced" in a chat conversation on his mobile phone that ended just before the attack.
Last Update: Aug 06, 2016 2:16 pm
RELATED TOPICS