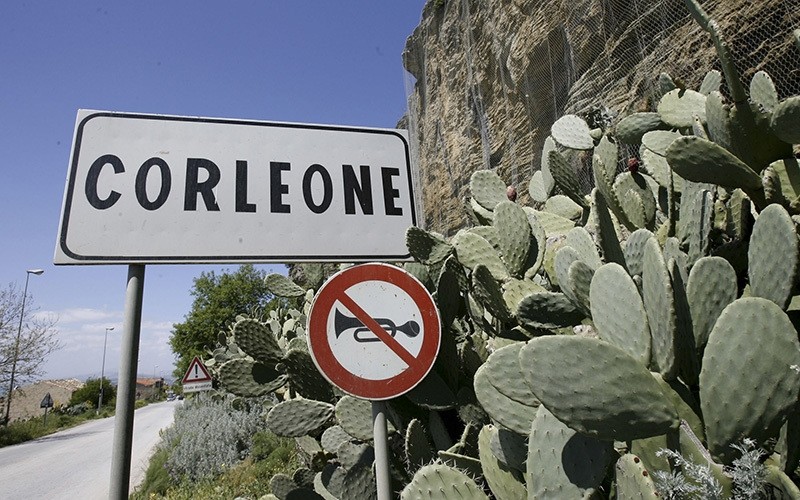 In this file photo taken on April 12, 2006, a road sign announces the town of Corleone, Italy (AP Photo)
by Aug 10, 2016 12:00 am
Italy's government on Wednesday dissolved the municipal administration of Corleone, the Sicilian town known around the world as both a real and fictional stronghold of the mafia.

Corleone, which means "heart of the lion" in dialect, and three other local governments in southern Italy were disbanded by Prime Minister Matteo Renzi's government in a sign the country still grapples with organized crime in the 21st century.

Corleone was the hometown of Mario Puzo's fictional "Godfather", and also the real birthplace of Bernardo Provenzano and Salvatore Riina, two mafia chieftains who took control of Sicily's Cosa Nostra in the 1980s after a bloody mob war that some historians estimate left 1,000 people dead.

Riina and Provenzano, dubbed "The Beasts" for their brutal violence, were eventually tracked down and jailed for life. Provenzano died at age 83 last month, while the 85-year-old Riina remains in a high-security prison.

From 1991 through June of this year, 212 city governments had been dissolved in Italy for mafia infiltration. This is the first time Corleone's administration has been dissolved.

Cities are then managed by a government-appointed commissioner until new elections are held. The administrations of Arzano near Naples, and two Calabrian towns, Bovalino and Tropea, also were disbanded this week.

The criminal power of Sicily's Cosa Nostra has declined markedly over the past two decades as a result of a sweeping crackdown after the assassination of two prominent anti-mafia jurists in 1992, which shocked Italy. But Calabria's 'Ndrangheta mafia has grown in influence by making itself Europe's single-biggest importer of South American cocaine, investigators say.