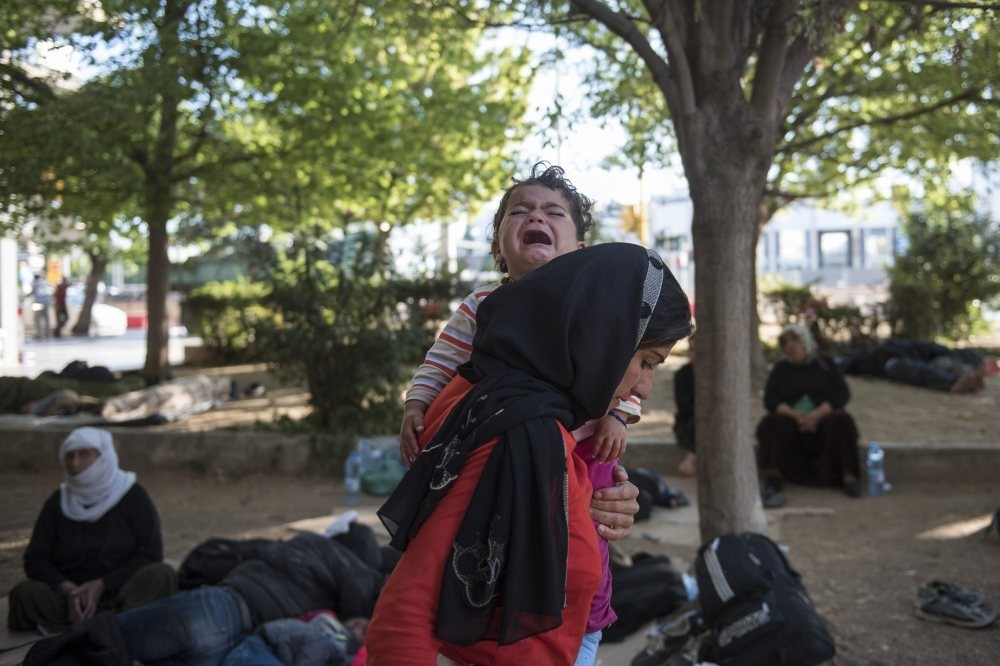 A woman carries her crying baby in a park in the northern Greek city of Thessaloniki, July 9.
by Aug 18, 2016 12:00 am
Overcrowding in Greek migrant camps is putting thousands of Syrian children at risk, a charity group said yesterday, as the coast guard reported hundreds of rescues in the last nine days. The average number of arrivals at camps on Greek islands has reached the highest level since May, "causing serious congestion and putting children at risk," the international charity Save the Children said.

Arrivals more than doubled in the first 14 days of August compared with the same period of July, although the numbers remain well below the level seen last year. But camp closures and migrant travel restrictions to the Greek mainland have meant that facilities on the islands of Lesbos, Chios and Samos are "bursting at the seams," it said. About 3,800 children are among the roughly 10,300 migrants stranded on the islands, "forcing women and children to live in demoralizing and unsafe conditions," Save the Children said.

The group urged the European Union to "ensure that the inhumane treatment of refugees and migrants is immediately ended, particularly the vulnerable and unaccompanied children still detained in closed facilities." The Greek coast guard said Wednesday that more than 300 migrants have been rescued from the Aegean Sea over the past nine days. In addition to 59 people rescued Wednesday morning near the island of Kos, the coastguard said it had pulled 266 people to safety from the waters of the Aegean Sea since Aug. 8. Two suspected smugglers had also been arrested and four boats confiscated, the coastguard added.
RELATED TOPICS