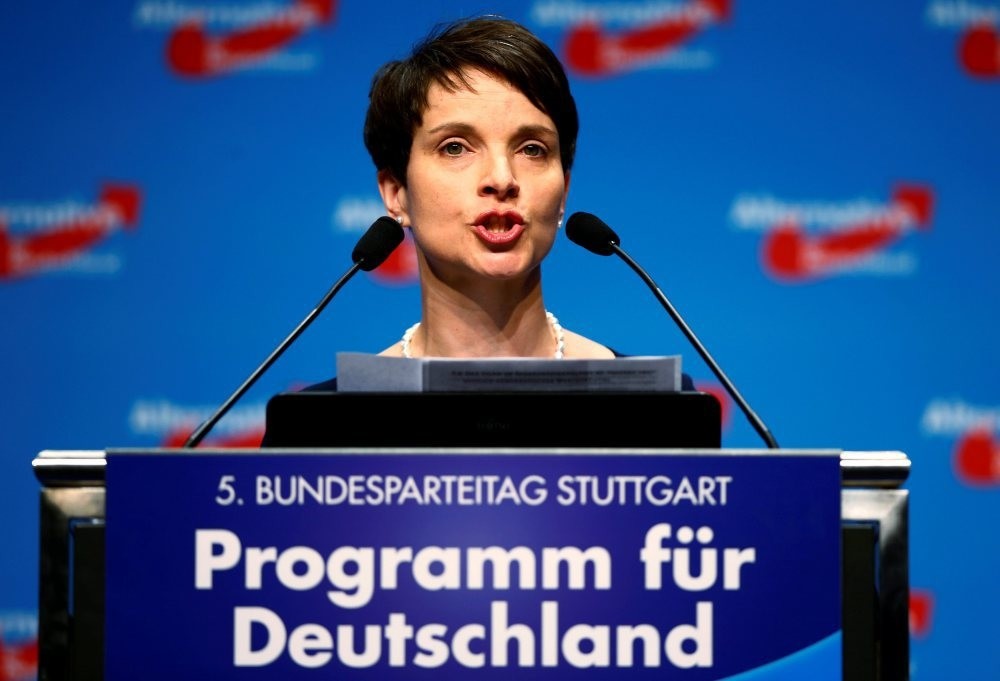 by Daily Sabah with Wires Aug 23, 2016 12:00 am
The leader of the far-right party Alternative for Germany (AfD) has spoken out in favor of people arming themselves with guns and self-defense devices following a series of violent attacks last month.

The anti-immigrant AfD has won growing popular support in Germany due in part to Europe's migrant crisis, which has seen more than 1 million refugees arrive over the past year, and it now has seats in eight of Germany's 16 state assemblies.

After two extremist attacks and a shooting rampage by a mentally unstable teenager last month, the AfD is expected to make a strong showing in votes next month in Berlin and Mecklenburg-Vorpommern.

"Many people are increasingly feeling unsafe. Every law-abiding citizen should be in a position to defend themselves, their family and their friends," Frauke Petry told the Funke Media Group in an interview published on Saturday. "We all know how long it takes until the police can get to the scene, especially in sparsely populated places," she said.

Petry rejected calls to toughen up gun laws, saying this would affect respectable citizens and not those who acquire weapons in the so-called "dark net", which is only accessible via special browsers. Instead, she criticized "ruinous cuts" on police and said the state at lost its monopoly on the use of force in places.

Germany has some of the most stringent rules around gun control in Europe. Firearm owners must obtain a weapons license for which applicants must generally be at least 18 years old and show they have they have a reason for needing a weapon. The number of Germans applying for so-called "small firearms license", which are required to carry around blank guns and pepper spray, jumped 49 percent in the first half of 2016 to 402,301, according to federal statistics. However, permits for firearms fell to 1.894 million as of the end of June compared to 1.898 million a year earlier.

Known for her fiery speeches to AfD supporters, Petry sparked an uproar earlier this year when she called for German police to be allowed to use firearms against illegal migrants. In May, the AfD adopted an anti-Islam policy in a manifesto that also demands curbs to immigration, as polls showed it is now the country's third strongest party. The policy paper of the AfD demanded bans on minarets on mosques, the call to prayer, full-face veils for women and headscarves in schools. Having entered half of Germany's 16 state parliaments, the AfD - seen as the country's answer to France's National Front and Austria's Freedom Party - has now firmly set its sights on national elections next year.

The party has been at pains to distance itself from the hardcore far-right and neo-Nazi movements, which are a stubbornly persistent but fringe phenomenon in a country where collective shame over the Nazi era and the Holocaust runs deep.

To its many critics, the AfD represents xenophobia and a backward-looking isolationism. Aside from drawing the anger of left-wing groups, the AfD has also attracted near-universal condemnation from Germany's major parties.

After the party adopted the anti-Islam policy, the general secretary of Merkel's Christian Democrats, Peter Tauber, told the Bild am Sonntag newspaper: "The debates at the party congress show that the AfD wants to return to a Germany that never existed in that form. "That isn't conservative, it's reactionary."

Recently, support for far-right populist parties across Europe has been surging especially over fears of a refugee influx fleeing violence and persecution in the Middle East and Africa. Political parties like the AfD in Germany or Front National (FN) in France have adopted a strong anti-immigrant and anti-Muslim discourse. Anti-immigration sentiments and xenophobia have become more visible in the country as a result of the efforts of anti-Islam and anti-immigrant initiatives like PEGIDA that have staged anti-immigrant rallies and drawn thousands of people throughout Europe. Despite warnings from other European political figures, Islamophobia and xenophobic rhetoric still survive and have gained ground across Europe.
RELATED TOPICS