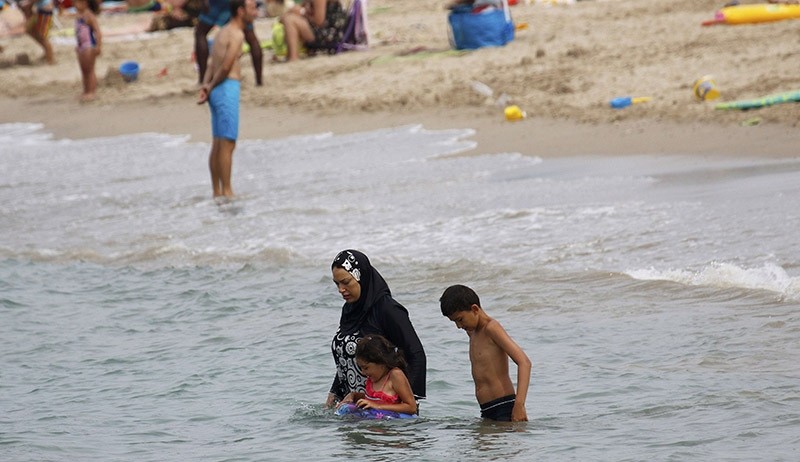 French police forced a woman to strip down and handed her a 32 euro fine in Nice's Promenade des Anglais beach for wearing a modest swimsuit, British paper Daily Mail reported on Tuesday. In the story, the paper said that the burkini ban in France is "turning into a farce."

According to the piece, another similar incident happened at a beach in Cannes. A 34-year-old mother was ordered to leave the beach and was fined for simply wearing a headscarf.

According to the piece, three armed officers pointed a pepper spray canister in the young mother's face and told her she was violating a new rule which outlaws swimming costumes that cover the entire body.

She said the 'racist' officers wanted to humiliate her in front of her children and other family members. She was not even wearing a burkini, the Daily Mail reported.

France, which recently banned the "burkini," the swimsuit specially designed for Muslim women, drifts day after day towards Islamophobia with rising oppression against Muslims, while the country's secular constitution is questioned on the basis of human rights.

The Human Rights League (LDH) and other rights groups believe the burkini ban is a "serious and illegal attack on numerous fundamental rights" including freedom of religion.

The French premier, Manuel Valls came under fire after his statement regarding the burkini. "It is the expression of a political project, a counter-society, based notably on the enslavement of women," he said.

One of the world's most secular countries, France strongly separates religion and public life, and overt religious symbols or clothing are considered incompatible with French values.

Islamic dress has long been a subject of debate in France, which was the first European country to ban the Islamic face veil in public in 2010, six years after outlawing the headscarf and other conspicuous religious symbols in state schools.

According to Islamic law, a woman that reached puberty has to cover every part of her body except for her hands and face. With the ongoing headscarf bans in France's schools and the newly implemented burkini ban, France is accused of violating freedom of religion and belief as by prohibiting believing women to fulfill their religious duties.

Villeneuve-Loubet, just west of Nice, was among the first of some 15 French towns to ban the burkini, triggering a fierce debate in France and elsewhere about the wearing of the full-body swimsuit, women's rights and secularity.

The Nice tribunal ruled on Monday that the ban in Villeneuve-Loubet was "necessary, appropriate and proportionate" to prevent public disorder after a succession of Daesh terrorist attacks in France, including one in Nice on July 14.

The burkini was "liable to offend the religious convictions or (religious) non-convictions of other users of the beach," and "be felt as a defiance or a provocation exacerbating tensions felt by" the community, it added.