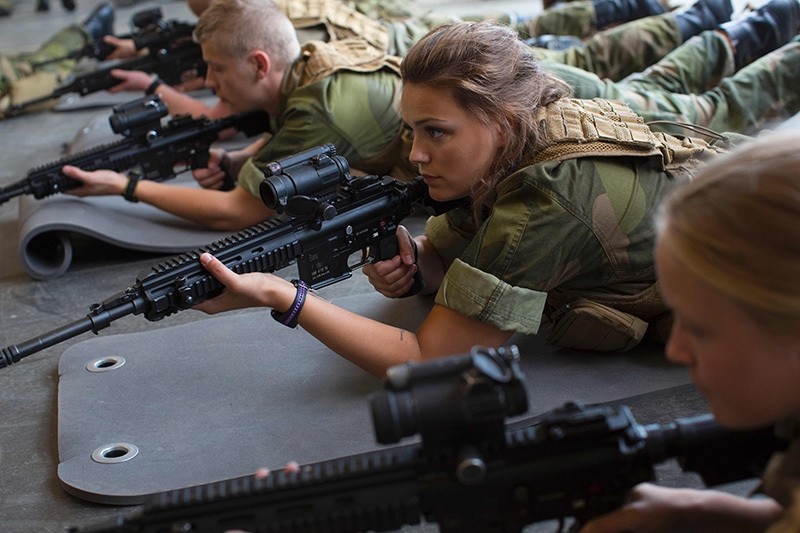 They sweat together, they sleep together: in the name of gender equality, Norway has introduced compulsory military service for women, even bunking them in mixed dorms with their brothers-in-arms.

The military's gender balance is not entirely equal yet, but almost a third of the Norwegian army conscripts born in 1997 were women this summer.

At the Setermoen army base just above the Arctic Circle, new recruits in an armored battalion are learning to handle assault rifles for use on combat missions. Here and there, long ponytails stick out behind the recruits' caps.

"It gives me a bigger recruitment pool to choose from," the battalion's chief, Lieutenant Colonel Pal Berglund, says of the new gender equal draft.

"I'm still looking for the same competence I always have. And for me it's obvious that this competence is also present within a large part of the female population of Norway."

But in 2013, at a time when the prime minister was none other than current NATO Secretary General Jens Stoltenberg, a virtually unanimous parliament passed a law applying military conscription to both sexes.

The Scandinavian country -- where four of the last five defense ministers have been women -- has thus become the first North Atlantic Treaty Organization member and European country to draft both men and women, joining a tiny group of countries around the world, including Israel.

"In operations, it's an advantage having females. They have access to parts of the population that men don't have, for instance for intelligence gathering," says Berglund.

The army needs less than 10,000 new recruits each year, far fewer than the 60,000 who are liable to be called up. That means that only the most motivated will actually be asked to serve, in a country where military service is often seen as a personal accomplishment highly valued on the job market.

"It enables you to cut the umbilical cord. It's good that girls and boys get the same opportunities," says new conscript Marianne Westum.

"I'm aiming to become much more independent, to learn to work as a team member, to make friends from other walks of life. Basically to become more grown-up."

The 18-year-old shares living quarters with another woman and four men. Camouflage gear and a military-issued flask are neatly organized in a metal cupboard, only a bra and handbag indicating the presence of a woman.

Is it not tempting fate to throw young men and women together in unisex bunks?

"We see that exposure to each other increases tolerance, acceptance and understanding toward each other," insists Nina Hellum, a researcher at the Norwegian Research Defence Establishment.

"You don't shit in your own nest. You don't want to have sex and fraternize with anyone in your room for example or in your small unit because that makes it quite awkward."

A 2014 study showed that unisex dormitories helped combat sexual harassment thanks to a phenomenon of "de-genderization". Sharing living quarters makes both the men and women pay more attention to their behavior, and thus they're able to develop a camaraderie, an almost sibling-like relationship, the study's authors claimed.

"In the beginning we were a little shy. We didn't really know how to behave around the girls. But once the initial awkwardness had passed, we relaxed and the girls were soon just like us," says a young male recruit, Kasper Sjavag.

Being mixed together with the guys "means that when it comes to performance, I really push my limits and can get used to working harder to keep up," says Kasper's female roommate, Gine Grimsbu.

"From a social aspect, the guys treat us well and they're respectful. There are a few who aren't used to being with girls but I think it'll be fine."

A recent survey conducted by the Norwegian army showed that an overwhelming majority of female soldiers are in favor of unisex dorms. But 18 percent still said they had been subjected to inappropriate comments or behavior.