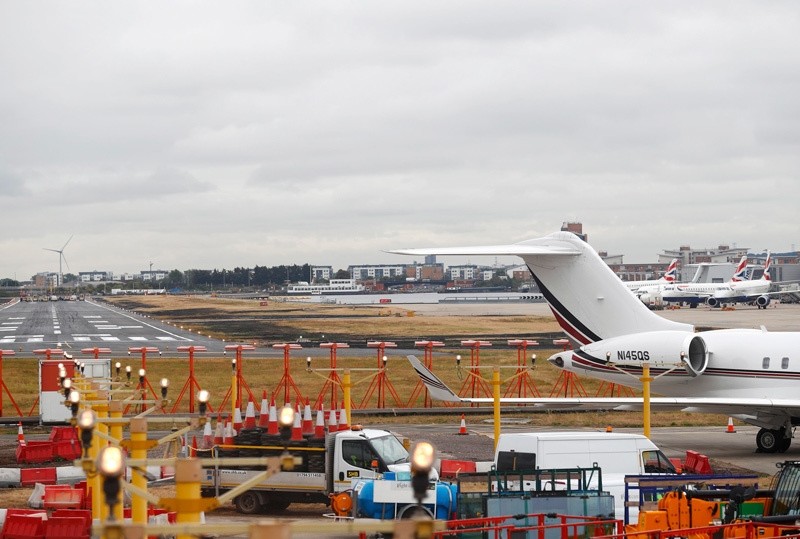 Aircraft stand idle at City Aiport after a protest closed the runway causing flights to be delayed, in London, Britain September 6, 2016. | REUTERS Photo
by Anadolu Agency Sep 06, 2016 12:00 am

Flights at one of London's busiest airports were grounded Tuesday after activists protesting the treatment of black people in the U.K. staged a sit-in on the runway.

The nine protesters erected a wooden tripod on London City Airport's runway and locked themselves to the structure, preventing flights from taking off or landing at the busy hub in the east of the capital.

They are understood to have broken into the airport shortly after 5.00 a.m. local time (0600 GMT) on Tuesday morning.

Photographs posted on Facebook showed the demonstrators lying on the ground around banners that read "Black Lives Matter" and "Climate crisis is a racist crisis", watched by a small number of police officers.

London's Metropolitan Police said the officers were on the scene negotiating with the demonstrators.

"We are awaiting the arrival of specialist resources that are able to 'unlock' the protestors," a statement added.

Dozens of early-morning flights were cancelled at London City, which is the U.K. capital's fifth airport and is heavily used by the nearby Canary Wharf financial district.

It was not clear how the protesters accessed the runway, which is situated next to the River Thames and surrounded by fencing.

Airports were already at a high state of alert in the U.K., where the terror threat level is at "severe", meaning an attack is highly likely.

The Black Lives Matter UK group came to prominence last month when they staged a series of roadblocks including one outside Heathrow Airport, the country's busiest hub.