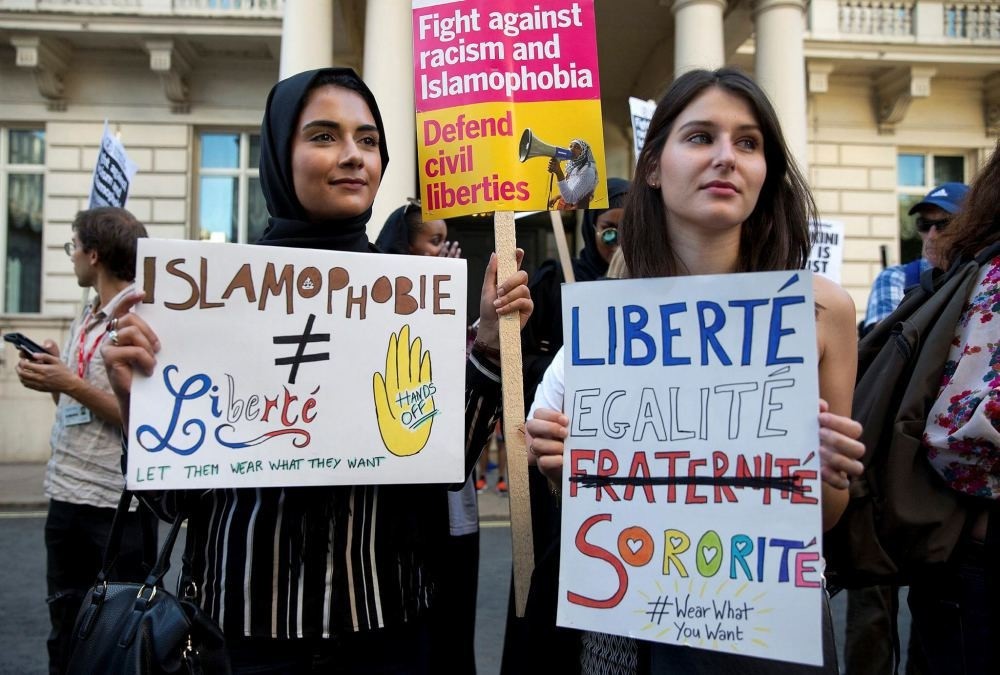 Women join a demonstration organized by ,Stand up to Racism, outside the French Embassy in London on Aug. 26 against the Burkini ban on French beaches.
by Daily Sabah with AFP Sep 07, 2016 12:00 am

French Prime Minister Valls slammed a NY Times article on the burkini ban while defending France as a free country for Muslim women. However, Muslim women in France are facing discrimination as two mothers with headscarves were reportedly banned from entering school

Amid on-going discussions over human rights and freedoms in France, French Prime Minister Manuel Valls on Monday slammed a New York Times article prompted by the debate over the burkini swimsuit in which French Muslim women complained of discrimination and even "persecution," stating that "In France, women are free." The article "paints an intolerable picture, as it is false, of France, the country of lights and of liberties," Valls wrote in a response published by the French-language online edition of Huffington Post.

New York Times reporter Lillie Dremaux solicited the views of European Muslim women on the burkini debate, distilling more than 1,000 comments for the article. One respondent said she was "afraid of having to wear a yellow crescent on my clothes one day, like the Star of David for Jews not so long ago."

"French Muslim women would be justified to request asylum in the United States... given how many persecutions we are subjected to," another women said.

Valls objected "with the greatest vigor... that the journalist quotes women of the Muslim faith suggesting that their voices are muzzled, to depict France as oppressing them."

The Socialist prime minister, who came under fire for saying last month that the burkini was "based notably on the enslavement of women," reiterated his stance in the Huffington Post piece. Blasting foreign media for accusing secular France of seeking to "undermine Muslims' freedom to practice their faith," he said: "It is precisely for freedom that we are fighting." Valls saw an "incredible reversal" in comments that he said presented the burkini as "an instrument of women's liberation," citing one respondent who said her sister "could finally play with her children on the beach instead of sitting in the shadow."

Another said "wearing the veil does not mean being enslaved by a man... it means appropriating the body and femininity." These women's assertions suggest "complete acceptance of male domination," Valls wrote.

"In France, we consider to the contrary that... women cannot be the subject of the slightest domination. And the idea that women should be removed from the public arena is indeed male domination," he added. The prime minister linked the promotion of the burkini to Islamist "proselytizing."

"It is not an anodyne swimming costume. It is a provocation (of) radical Islamism that is on the rise and wants to impose itself in the public arena," Valls wrote.

He said the "great majority of Muslims... do not recognize themselves in this proselytizing minority that is exploiting their religion." Valls said France was "proud that Islam is the country's second religion. Millions of citizens of the Muslim faith or culture respect their duties perfectly and fully enjoy their duties."

Two Muslim mothers wearing headscarves were accosted and prevented from entering a nursery school on the French island of Corsica on Monday by two other parents, officials said. The incident happened as parents were dropping off their children at the start of the school day in Bonifacio, on the island's southern tip. The two women, wearing Muslim headscarves, "were stopped by two men, two brothers, who thought it wasn't right that their children are not allowed to wear emblems of their religion at school and yet these women could enter with their veils," said local prosecutor Eric Bouillard, confirming a report in the Corse-Matin newspaper. Bonifacio mayor Jean-Charles Orsucci said his education official "had intervened to allow normal entry to the school".

Police and a schools inspector were also sent to the scene "and the situation calmed down. There were no violence, no threats, and therefore no laws broken," said Bouillard. While religious symbols are banned for pupils and teachers in French schools, there is no such constraint on parents. The incident is the latest example of intercommunal tensions in France.

A burkini ban by local authorities in a string of resorts in southern France divided opinion and ended up in the courts. A Nice court finally suspended its ban on the Islamic swimsuit on Thursday after authorities there had defied a ruling by the country's highest administrative court.

The string of bans came after the full-body swimsuit allegedly sparked violent clashes in Corsica - in the latest in a series of incidents that have raised tensions between local Muslims and their neighbors.
RELATED TOPICS