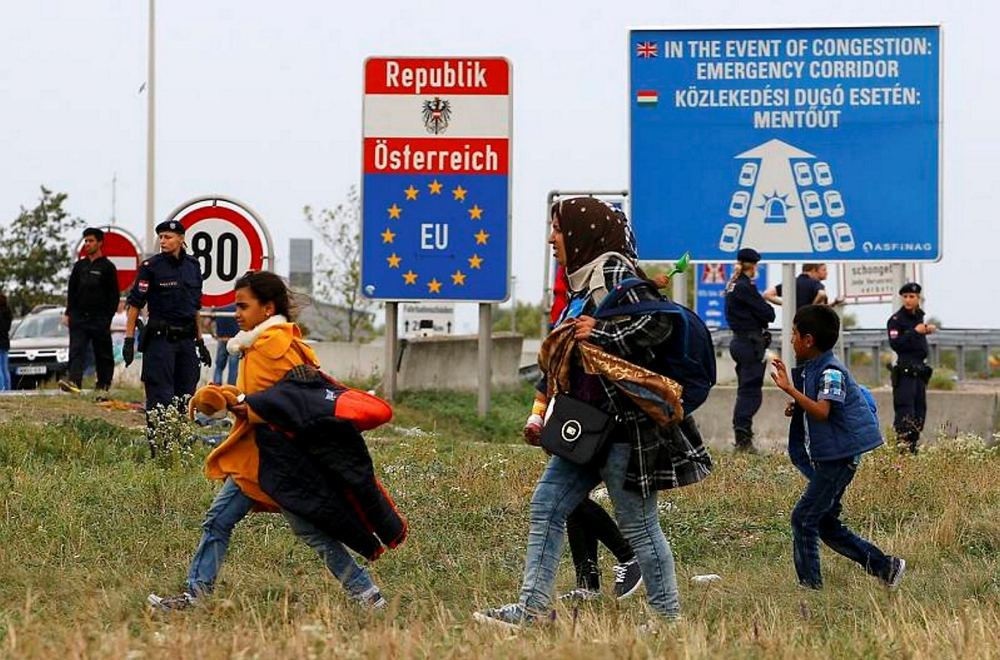 Migrants walk away from the border crossing from Hungary in Nickelsdorf, Austria.
by Daily Sabah with Wires Sep 08, 2016 12:00 am

Austria's interior minister said on Wednesday Vienna would take Hungary to court if it refuses to take back migrants who, under European rules widely ignored since last year, are meant to seek asylum in the first European Union state in which they set foot. The conflict between Austria and Hungary shows that the national government interests in the European Union too often displaced sound policy responses to the refugee crisis delaying protection and shelter for vulnerable people.

Officials in Austria and Hungary say the situation is largely under control a year after their shared border became a focal point of a mass influx of refugees to Europe, many of them heading for Germany. Hundreds of thousands of migrants travelled from southern European countries further north to Austria, Germany or Sweden, making it impossible to implement the so-called Dublin rules to send migrants back to their initial arrival point in the EU.

Countries in central and eastern Europe, including Hungary, have opposed any European attempts to force states to accept returned migrants or to introduce a quota regime. "In the main we have a European Dublin regime. The European Union is in charge of ... Dublin and states or groups of states that permanently break the law have to expect legal consequences," Interior Minister Wolfgang Sobotka told ORF radio.

"In that case, the [Austrian] republic must sue. The republic must see that the European Union acts according to the law, full stop," Sobotka said when asked about Hungary not accepting migrants sent back under Dublin rules.

The Hungarian government has long declared the Dublin agreement finished. Government officials were not immediately available to respond to Sobotka's comments.

Serbia's government also accused Hungary of breaching international law by returning the migrants. New measures introduced by Hungary allow its forces to return to Serbia migrants detained within 5 miles of the border.

Austria initially welcomed large numbers of refugees from the Middle East and Afghanistan. However, the government started to toughen its asylum rules earlier this year and introduced an annual limit on the number of asylum requests it accepts.

Those steps, widely criticized by human rights groups and the European Union, came after support for the far-right Freedom Party (FPO) in opinion polls surged ahead of the ruling centrist parties. The FPO's candidate might also win presidential elections on Oct. 2 on an anti-immigration platform to become the EU's first far-right head of state.

As the E.U cannot reach a common solution to respond to the refugee crisis, many European countries have toughened their stance on refugees and migrants. Along with Sweden, Denmark, known for its long history of high human rights standards, tolerance and openness, has been in competition with other European countries to become the least attractive country in Europe for refugees and asylum seekers.

As part of plans to make the country even less attractive to newcomers at a time when asylum numbers and overall immigration are already down, the Danish government released its 2025 Plan to introduce more restrictions on border controls. According to the plan, the Danish police would be able to reject asylum seekers at the borders in times of crisis like in 2015 when thousands of migrants sought to enter the country.
RELATED TOPICS